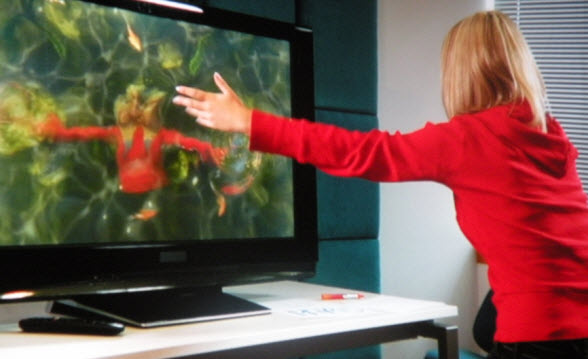 Trying to one-up Nintendo at the E3 game conference in Los Angeles this week, Microsoft showed off a game-control scheme where you use your body to control what happens in a game.

Dubbed Project Natal, the new game control system uses a 3-D depth camera to capture your movements in front of the TV and translate them into control actions for a game.

Don Mattrick, head of Microsoft’s game business, took the stage at the Microsoft press conference to show off the system. Director Steven Spielberg came out on stage to praise Microsoft for showing off something he said he’s been dreaming about for many years.

Microsoft showed a video demonstrating how the game system could be used to control games such as fighting or skateboarding games. You can scan your own skateboard into a game and then use it to ride on in a skateboarding game. The idea is to make people feel more connected to a game, said Peter Molyneux, head of Microsoft’s Lionhead game division. Molyneux showed a game dubbed Milo, where you can interact with a little boy, a virtual character, and explore a world with your own body movements.

You can use the system to control your Xbox Live avatar, or virtual character, on the TV screen. You can navigate through the Xbox 360’s dashboard using gestures captured by the camera. Microsoft showed off a demo game that let you paint pictures on the TV using swipes of your hands. Another game showed how you can kick a ball back and forth in a soccer-like simulation. You can also swoosh your hand through water and make it splash. Microsoft pointed out that you can’t do these things with similar accuracy with the Nintendo Wii.

Richard Doherty, an analyst at the Envisioneering Group, said it remains to be seen just how good the camera technology is in terms of allowing multiplayer play. He thinks it could take a long time before game developers can launch games based on the technology, though it might happen sooner if Microsoft itself can get downloadable games out for its Xbox Live service.