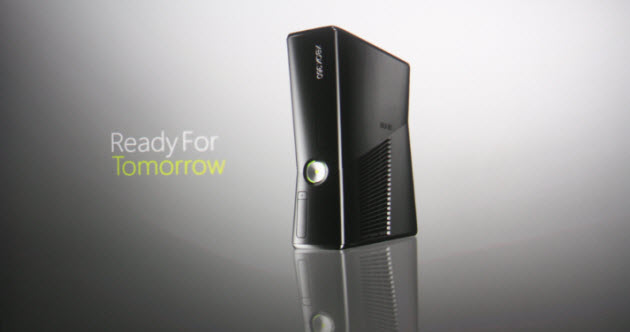 Microsoft said it will launch a smaller Xbox 360 video game console today in a move to lower its costs and compete head to head against smaller machines from Nintendo and Sony.

That move was expected. But the surprise is that it will be available in stores right away, as early as tomorrow, for $299. It comes with a 250-gigabyte hard disk and 802.11n Wi-Fi wireless networking. That price is the same price as the current Xbox 360 with a 160-gigabyte hard drive.

Sony launched its revamped PlayStation 3 Slim last fall to great success. Previously, Sony had a big and costly box that it started selling in 2006. But it streamlined the electronics inside the box and learned how to make the same components smaller without sacrificing any of their performance. That helped lower the cost, power consumption, and physical size of the components. This is one of the critical moves that we anticipated in our story on the state of the video game console war.

Microsoft wasn’t nearly as aggressive as Sony in making a smaller console. It has been using the same size box since it launched the Xbox 360 in 2005, even though it has redesigned the motherboard (the main circuit board) and its chips several times. By keeping the console size the same, Microsoft was able to benefit from economies of scale in making the same device over and over again in the tens of millions. It also avoided retooling costs. But it didn’t capitalize on the savings that could result with a smaller box.

Apparently the time has come to make that smaller box. We noted earlier that the company was working on a chip code-named Valhalla, which would combine the graphics chip and microprocessor inside the same chip, lowering costs.

Nintendo, meanwhile, already has the smallest box, since its console is relatively simple and doesn’t support high-definition graphics. Try as they might, neither Sony nor Microsoft will ever be able to match the lowest production costs of the Wii. Still, this is a necessary step for Microsoft to make.

It also has benefits for consumers, whose living rooms are getting overloaded with set-top boxes of various kinds. And in Japanese homes, where physical space is at a premium, it makes sense to have products be as small as possible. The new box will likely position Microsoft to make further price cuts. In August and September of last year, Sony and Microsoft shaved $100 off the price of their mainstay units, while Nintendo cut its price by $50. To date, the consoles in this generation of hardware have been priced higher at this point of the sales cycle than they’ve ever been in previous generations.