Microsoft is a few months late to the gameplay-broadcasting party when compared to its rival Sony, but the Xbox One company thinks the wait is worth it.

This morning, Microsoft revealed that it will debut Twitch livestreaming for Xbox One on March 11 to coincide with the release of anticipated sci-fi shooter Titanfall. This will enable Xbox One owners to share a live video feed of their in-game action to the Twitch site without needing any additional hardware or software. The company is promising that gamers will love its solution due to the app’s feature integration and high-quality video.

GamesBeat got the chance to talk with Xbox senior director Lisa Gurry about Twitch integration, and we asked her what caused the delay.

“We were just working on the full feature set,” she told GamesBeat. “For example, we were working to ensure users get notifications on Xbox One when their favorite gamers are broadcasting. You can be in the middle of another activity, and you’ll get a notification so you don’t have to miss a minute of the opportunity to watch someone play.” 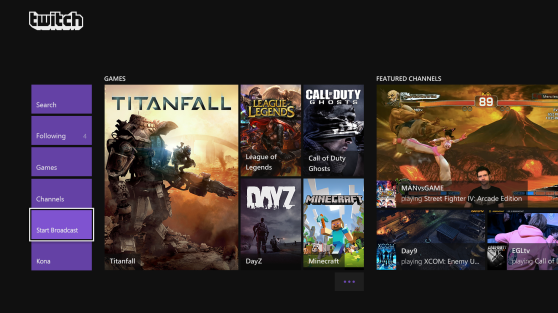 Above: The viewing experience on Twitch.

On the Twitch site, players with accounts can follow and favorite people. The Xbox One will show a notification whenever one of your favorites starts streaming. Unlike PS4, it doesn’t matter if that broadcaster is playing an Xbox One, PlayStation 4, or Wii U game because the Twitch app doesn’t limit streams on the Microsoft system. Sony’s machine only enables viewers to watch other PS4 streams on the console.

That’s not the only way that Microsoft is trying to set itself apart and above the PS4’s features. During our chat with Gurry, she referenced comments from Twitch chief executive Emmett Shear where he said the Xbox One represents “complete integration” of his service. That means things like having the full channel lineup without restrictions, but it also means support for keyboard for those who want to text chat with the audience directly through the Xbox One. Additionally, Twitch will even archive Xbox One live broadcasts, which is another thing the PS4 is currently incapable of.

“It’s exciting because we’ve never had the ability to broadcast from a console like this with such a deep level of integration,” Shear said in a statement. “The concept of being able to join a broadcasters’ party is really cool, and it’s another step in the direction of interacting more closely with broadcasters.”

Of course, things like keyboard support are nice, but that stuff won’t matter if the streaming video coming out of the Xbox One Twitch app looks like garbage. According to Gurry, that isn’t the case.

“It’s crisp, clean video,” she said. “The resolution is 720p, and there is a range of options that you can choose from a settings standpoint.”

The importance of streaming is clear. More than 200,000 people are using their PS4s to stream games to Twitch. That’s free marketing for Sony and its publishing partners. Microsoft’s timing — making this feature live on the day of Titanfall’s release — indicates that it understands that seeing these games in action is a big influence on some people’s purchasing decisions.