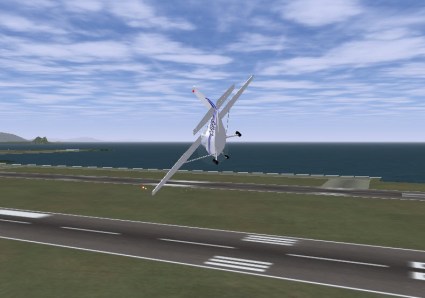 Amid the news that Microsoft is laying off 5,000 people over the next 18 months, sources report that the game division has taken its share of the beating.

Gamasutra reports that the Flight Simulator studio, dubbed ACES, suffered big layoffs yesterday, which marked the cutting of the first 1,400 jobs. [Update: A Microsoft spokesman confirmed that ACES has been shut down.]

In addition, we’ve heard that about 30 percent of the company’s video game testers have been cut. Also, next week, the game group is expected to undergo a management restructuring. Microsoft declined to comment on those moves. One source suggested that information about the game testers and the restructuring wasn’t accurate, while another one said it was.

Microsoft’s game operations have frequently suffered because of the shifting priorities of the overall company. The game studios bulked up in advance of the Xbox launch in 2001, but they thinned out again as Microsoft was losing too much money in its first generation in the console business. The company staffed up again for the launch of the Xbox 360 in 2005 and now the investment priorities are changing again.

As Microsoft shifted a lot of resources to deal with threats such as Google, games took a back seat and had to become profitable. Microsoft also didn’t have the hardware, testing, and repair staff to deal with the large number of Red Ring of Death defects in the Xbox 360. In the most recent quarter, the company reported operating income of $151 million on revenue of $3.2 billion.

In the past year or so, Microsoft has shut down or divested itself of a lot of its hit-making studios. It recently decided to close Ensemble Studios, maker of the Age of Empires strategy games, and spun out Bungie, the maker of Halo games, in a move that gave Bungie more creative freedom to make games that didn’t run on the Microsoft Xbox 360 or PC platforms.

Microsoft also closed FASA, makers of the Mech Warrior franchise and the not-so-successful ShadowRun cross-platform shooter game. Untouched so far in the layoffs are Lionhead Studios, which just published Fable II; the Forza Motorsport racing game studio; and Rare, the English studio behind many of Microsoft’s mass market games. While those studios will continue to work on Xbox exclusives, it’s clear that Microsoft is betting on outside talent for many of its hit games. That is risky since external studios can always shift their emphasis to make games for other platforms such as Sony and Nintendo. Epic Games, for instance, makes its Gears of War series for Microsoft, but it is free to make other games on other platforms. Microsoft also has some other unannounced game titles in the works.

Sony went through its own churn in game studios in the past couple of years, but Sony still has more internal developers than Microsoft, whose internal staff has now shrunk well under 1,000. Nintendo, which is doing the best in console sales now, presumably has been adding more developers. That’s not great for Microsoft, since game developers are the foot soldiers of the console war. Sony, facing its first loss in a long time, is also in the midst of layoffs.

In the current layoffs, it remains to be seen just how many people will be cut. Some people are permanently laid off, while others can go into a pool of people who can apply for the thousands of openings that Microsoft currently has. It’s likely that temporary workers are also being cut right now.