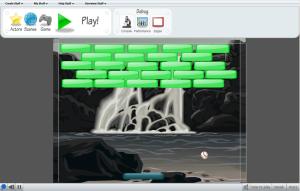 Microsoft is announcing today that it has created a easy-to-use Popfly Game Creator, a software tool that makes it easy for anyone to create their own arcade-like video games.

The tool is based on Microsoft’s popular mashup tool Popfly, which is based on the Microsoft Silverlight multimedia platform technology that competes with Adobe’s Flash. It isn’t for hardcore game developers. Rather, it’s meant to be a tool for casual gamers to make games that they can share with friends on Facebook.

“We wanted to make it web-based so anyone could use it,” said John Montgomery, group program manager for Popfly and Visual Studio Express. “You could get an eight-year-old to use it.” 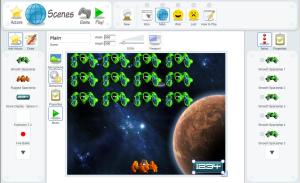 The tool uses templates and step-by-step instructions so that an amateur can create a game without writing a single line of code, says Montgomery. As I talked with Montgomery yesterday, he walked me through a session on how to create a simple version of Space Invaders, the classic arcade game from my childhood.

You can use templates for space-based games or other settings. Or you can start from scratch, crafting your own actors and scenes by selecting from a bunch of pre-fabricated components. Montgomery selected a space background for the Space Invaders game. He then selected the enemy space ships. He chose how the enemies could drop bombs and how the good ship on the ground could fire upward in its own defense. He could, for instance, assign a task to the left arrow on the keyboard so that the defender ship would move sideways at a rate of 500 pixels per second. He could also choose the key for shooting and determine how fast the projectile would move. He added explosions which would occur when a ship was hit and created transition scenes for winning or losing.  The whole process took a matter of minutes in the demo. 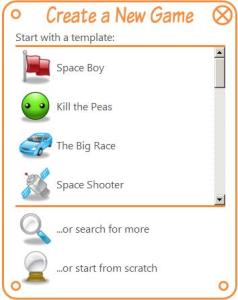 Popfly started as a project a couple of years ago. The first tool for creating mashups and web pages was released as a beta in the fall and it now has 200,000 beta testers. The Popfly Game Creator has been in the works for only a few months but Montgomery says there are already hundreds of options included in the game, from zany character designs to fun backdrop scenes.

Then he showed how he could embed the game into his own Facebook page or as a Sidebar game on the right hand side of his Windows Vista screen. Visitors to the Facebook page can play the game and rate it.

The tool is aimed at getting the Web 2.0 generation, which is already accustomed to creating user-generated videos on YouTube, to extend the mashup mentality to gaming, which has always been considered a difficult art to master. The tools are based on a philosophy articulated by Carnegie Mellon University professor Jeannette Wing in a paper, “Computational Thinking.” It basically argues that anybody should be able to create their own programs.

Game development, at least in the console game market, has become almost impossible for amateurs to tackle, with budgets ranging from $20 million to $30 million and team sizes easily reaching 100 programmers and artists. Game programmers look back with nostalgia for the days when they could create simple games with the efforts of just a single hobbyist. Microsoft has created its own XNA Game Studio Express tool with small independent developers in mind. Those developers can use the tools to create high-quality gaming experiences for the PC, Xbox 360, or Microsoft Zune media player. But even those require an understanding of programming. Popfly Game Creator, by contrast, is much simpler. A video for using Popfly Game Creator is posted here and a Popfly tutorial is here.

Microsoft has some fledgling competition. Electronic Arts has created its own game-making tool at The SimsCarnival web site. The site is in its closed beta stage.

The Popfly team will unveil the game creator tool at the Maker Faire event in San Mateo, Calif. Microsoft created a demo game for VentureBeat. To play it, click on this link or click on the icon below.
http://www.popfly.com/users/team/VentureBeat.small