SAN FRANCISCO — Phil Spencer defended the strategy for the November launch of the Xbox One video game console, even though Sony’s rival PlayStation 4 is outselling Microsoft’s system.

Speaking at the Game Developers Conference 2014 with Gamasutra editor Kris Graft, Microsoft’s top game development executive said that the company is in a great competitive position compared to past video game system launches and is poised to grow. He noted that Microsoft and Electronic Arts just had a great game launch with Respawn Entertainment’s Titanfall sci-fi mech/infantry shooter, which will likely result in a sales bump for the system.

“I couldn’t be happier with how it turned out,” he said. “EA will report sales. But the best result I can see is on Xbox Live, which had its biggest week since the console launch. I see gamers coming to the platform and playing a lot of Titanfall. We’ve seen the birth of a new game franchise.”

Spencer replaced Marc Whitten, the chief product officer for the Xbox One, as the speaker at the GDC session, since Whitten resigned earlier this week to become the chief technology officer at speaker-maker Sonos.

“I better get some free speakers,” Spencer said.

“The launch was great. I lived through the launch of the Xbox 360. Think of where the hardware is. Getting to launch is never without its tribulations. Getting them to the market and all of the working was good.”

Microsoft’s Xbox One policies had been set around a year before. It made the announcement of the machine in May 2013.

After that first announcement, Microsoft ran into a lot of negative buzz because of its restrictive policies on the sale of used games, the requirement that the console have an “always on” Internet connection, and privacy policies. Players objected to the policies, and the firestorm forced Microsoft to backtrack to calm people down. That gave Sony a lift in perception in the market, as it had no such policies.

The system launched in November, a couple of weeks after the PS4. It had a disadvantage, as the inclusion of the Kinect motion-sensing system drove up its cost. Microsoft is selling its console for $500, compared to $400 for the PS4. Consequently, the PS4 is outselling the Xbox One, with 6 million announced units sold compared to an estimated 4 million.

But Spencer pointed to hot games like Titanfall, developed by Call of Duty creators at Respawn Entertainment, for giving a boost to the Xbox One. He said the system had huge triple-A titles coming like Watch Dogs as well as smaller indie games. 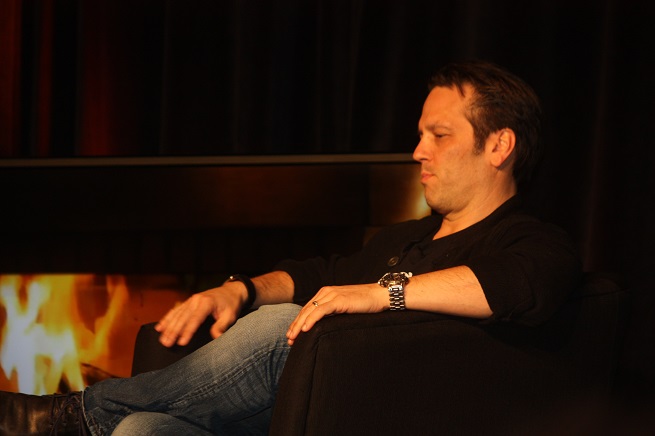 Above: Phil Spencer of Microsoft.

Microsoft’s approach to indies was also a source of embarrassment. At the Electronic Entertainment Expo trade show in June, Sony highlighted indie developers like the celebrated Jonathan Blow (Braid), who is creating The Witness, onstage and talked about a lot of games for the PS4 at the show. Microsoft showed almost nothing related to indies in its own press conference. That created the impression that Microsoft didn’t care about those games and their developers.

That’s an improvement on the Xbox Live Arcade in the Xbox 360’s heyday, as the selection and direct relationships were limited.

Microsoft has worked closely with Markus “Notch” Persson’s Mojang to publish the blockbuster world-building hit Minecraft on the Xbox 360. That has been a huge hit for the older system, Spencer said. And Microsoft also learned a lot about free-to-play publishing with Victor Kislyi’s Wargaming on World of Tanks, an online multiplayer shooter. One thing Microsoft had to do was position itself to be able to handle frequent updates to the core online game on Xbox Live.

“Notch and Victor are not quiet about what they want,” Spencer said. “They are quite public. They wanted to know if we got it.”

Microsoft had to step up with better marketing plans to satisfy both Mojang and Wargaming. Both launches have been successful, Spencer said.

Spencer acknowledged that Microsoft isn’t quite ready to offer things like games in Alpha testing, which is something that Valve’s Steam digital distribution service does on the PC with its Early Access program. That enables developers to sell a game that isn’t finished and still needs player feedback before completion. Spencer said that might be possible through games with user-generated content, like Project Spark, but he said such plans aren’t in place today.

The smaller indie games will provide a constant stream of content for gamers. Microsoft, in the meantime, will fund much larger game projects and begin announcing more of them at E3 in June, Spencer said.

Spencer said that he was grateful, as a representative of a company that makes Microsoft’s Windows, that Valve has been the champion of the PC. Valve has 75 million Steam players and will try to get them to adopt Linux-based Steam Machines coming out this fall. Spencer acknowledged that Microsoft dropped the ball on PC games and that Valve has served PC gamers very well.

“There is a renewed focus on the Windows platform and gaming,” Spencer said. “Not to compete with what Valve has done. We are committed to that.” 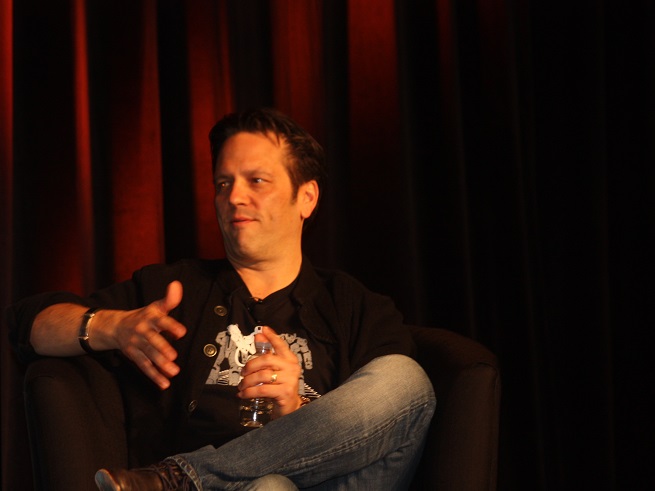 Above: Spencer of Xbox One