Nintendo has finally entered the age of smartphones and tablets, and its first app has a lot of interesting features and quirks.

Miitomo is out today around the world for iOS and Android, and you can download it now. It is a social network with some light game elements. You spend most of your time interacting with your Mii — the cartoon avatars Nintendo has used since the Wii — and others’ Miis by answering their questions. Your friends will then see those answers over time as they come to visit your Mii or your Mii goes to visit them. The idea is to get you talking about yourself, and then, Miitomo will help share these aspects of your personality with the people in your life.

And that concept works — although it may require a bit more of your time than you might expect at first.

I’ve spent a lot of time with the Japanese version of Miitomo (which is almost indistinguishable from the English version), and I’ve found that — once again — Nintendo has created something special.

One of the best things about owning a Wii U is getting first-party Nintendo games in high definition. Mario Kart 8 and Super Mario Maker are so pleasant to play in part because the publisher puts polish into every corner of its products. With Miitomo, you can get some of that on your phone. 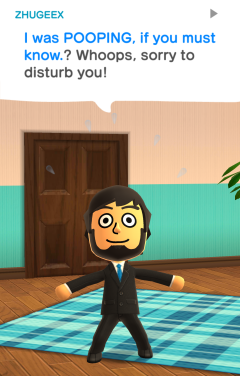 Above: The blue text was what I wrote, and the black text is how the computer-controlled Mii responded to it.

Visually, Miitomo is excellent. It runs at 60 frames per second, which makes everything look smooth and inviting. The Mii characters have never looked so detailed, and the animators have done a lot to ensure the avatars are simple but expressive.

But the quality here goes beyond the surface-level graphics. Nintendo has thought about the player experience in a much deeper way. When you comment on another friend’s answer, your Mii will react with an appropriate expression and animation while reading what you wrote in a funny text-to-speech voice. For example, one of my friend’s Miis asked me a one-on-one question (where the answer stayed between us) about “what were you doing a few minutes ago?” After I honestly answered, “I was using the bathroom,” my friend’s Mii made a surprised face and apologized for disturbing me.

My friend had no hand in that. This was all a procedural action that Nintendo programmed into the character. It knew that if I said something about relieving myself during a one-on-one question, it should probably apologize.

You’ll find examples of the computer-controlled characters behaving in amazing, believable ways throughout Miitomo, and it is a big reason that the app is so much fun to explore.

The Miifoto tool is wonderful

As you answer questions in Miitomo, you’ll begin getting comments from your friends, or you can add to your friend’s answers and comment yourself. Most people just type a few words, but you can also leave an image called a “Miifoto.” These are pictures you can create using Miis and suite of simple editing tools.

In just a couple of minutes (sometimes faster than that), you can create a picture featuring up to five Miis. Since the app enables you to import any Mii that people previously created for the Wii, Wii U, 3DS, or the Tomodachi Life games using a QR code, you can also bring in famous people. Miitomo also has the option to import any image you want as a background, so you can quickly comment on the news or a friend’s vacation photos.

At this point, creating a Miifoto is my preferred way of responding to other people. It’s more fun and meaningful, and it doesn’t take that long to fire off something like this: 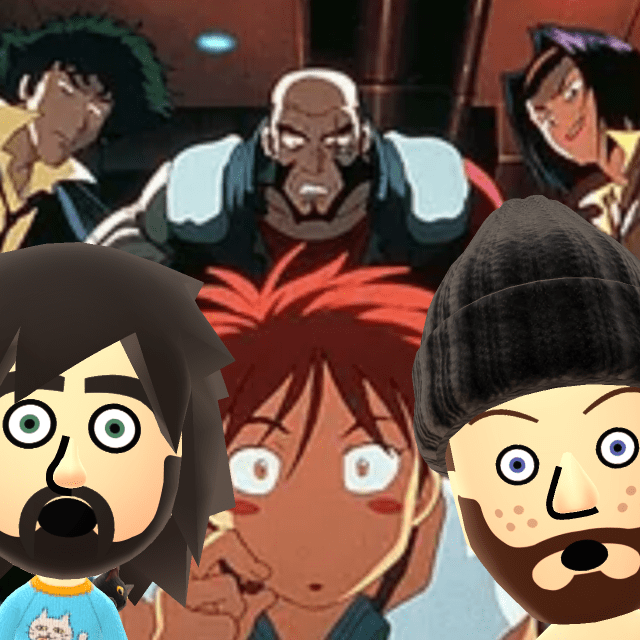 Above: After a friend mentioned his favorite show right now is “Cowboy Bebop,” I couldn’t help but make this for him.

I don’t like talking about myself. Well, that’s not exactly right. I don’t like holding an individual hostage with stories about my life while we’re talking in person. My belief is that most people aren’t interested in the details of my life, and I don’t want to put in the effort to make my complaints and anecdotes entertaining. So, in person, I avoid talking about myself.

Miitomo is kinda meant for me. It empowers me to feel good about talking about the things I do and like and dislike, and then my Mii will go out and share that with people on their own time. If the other person isn’t interested, they can move on to something else.

Due to its smart use of questions and interpersonal interactions, Miitomo is carving out its own niche in my use of social media. Facebook is still for family and friends. Twitter is where I send off any random thought from my brain into the ether. But Miitomo is where I can talk about myself and know that others are doing the same.

So, Nintendo put a lot of effort into Miitomo, but that comes with a cost.

Playing Miitomo can easily eat through your battery. It is graphically intensive, and those 60 frames per second require a lot of processing power. I’ve had Miitomo sessions that took my battery from 90 percent to 50 percent within half an hour. A big part of this is that Miitomo is most fun when you’re actively using it, which means you need to have your screen on. That alone is going to suck down watts. The built-in battery-saving feature, which cuts down on visual quality and the framerate, doesn’t work any miracles. 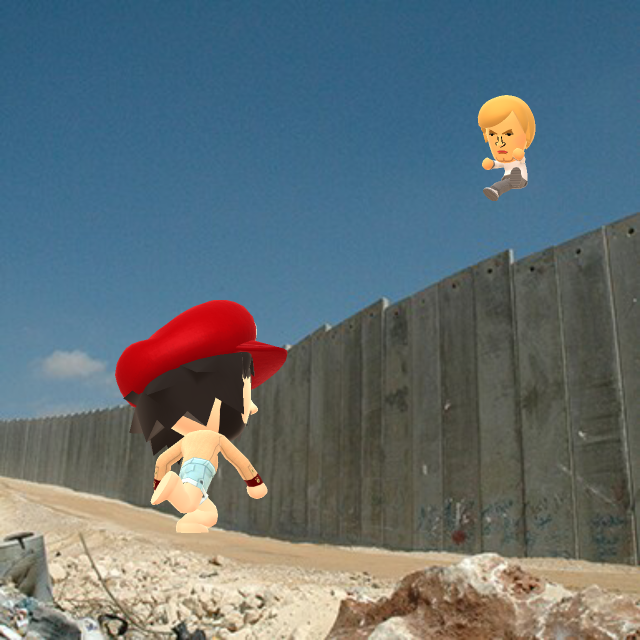 Above: It’s worth having a dead battery if you get to throw Donald Trump over a wall.

Nintendo also hasn’t quite figured out how to present the Miitomo experience so that you don’t run into a loading symbol after every screen. Nearly every action you perform comes with a small delay and a circular loading symbol. Now, we’re not talking Sega CD waiting times, but everything else on my LG G4 smartphone with Android 6.0 happens almost instantaneously. Why can’t Miitomo?

If you come back to Miitomo after a day or two, you might expect that the “Recent” list would serve as the best place to get caught up on what has happened. That’s not the case. As far as I can tell, this tab offers some combination of your recent actions and not what your friends are up to.

This has left me wondering multiple times where I should start. Should I go to my friends list and click through names on that? Should I click on My Answers, and see if anyone has responded?

The answer, as far as I can tell, is that you should probably just click on your character because that avatar will have some answers from friends and questions for you. But that makes all those tabs on the bottom confusing and distracting.

Finally, Miitomo has no native way to add friends unless you are with them in person. You can’t send an invite to someone unless the app suggests them, or you are already friends with them on Facebook and Twitter. If you don’t have Facebook and Twitter? I don’t know. You’re probably out of luck until you bump into someone else running the game. 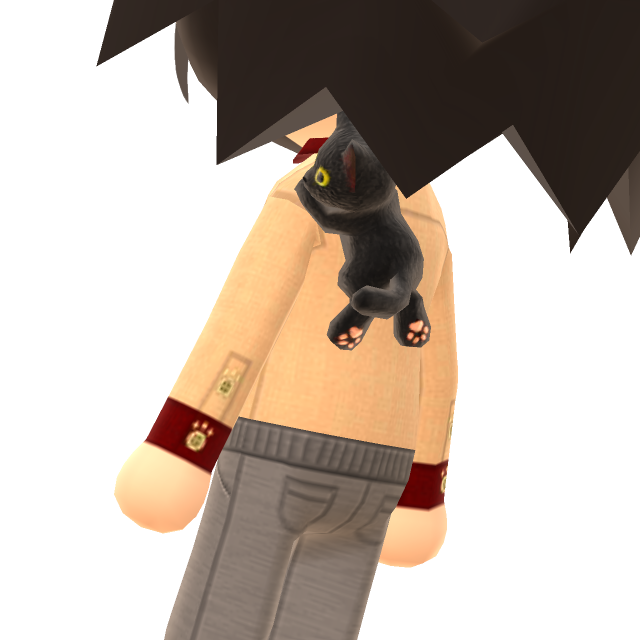 Above: Who needs friends when you can have a cat on your shoulder?

Nintendo is finally making smartphone games, and I think Miitomo is a strong start. It’s unique, which is something that I’m glad that the company is bringing to a somewhat stale smartphone scene. We’ll see how Miitomo grows from this point, but I’m enjoying it every day. I even put $10 into it to get some clothes that I really wanted from the store for my avatar and my Barack Obama Mii.

Will we still use Miitomo in a year? I think that’s possible if Nintendo keeps adding new stuff to do and new ways to interact. And that’s a good sign as the company prepares to launch four other smartphone games before the end of 2016.

Miitomo is out now for iOS and Android devices. GamesBeat downloaded it from the Google Play app store.