More than 5 million people have been playing with virtual building blocks in Minecraft. This summer, they’ll get the opportunity to manually assemble 480 physical pieces with LEGO Minecraft Micro World. The $34.99 toy set comes with four customizable vignettes of Minecraft-themed LEGO pieces and two adorable figures, game character Steve and a Creeper (this monster’s tendency to spontaneously explode remains limited to the computer game).

Danish toy company LEGO published new details and images of its collaboration with Swedish Minecraft developer Mojang. The project started in December 2011 with a pitch to LEGO CUUSOO, a community platform where fans submit ideas for new LEGO sets. Minecraft quickly gained the required 10,000 supporters and became the first CUUSOO submission to pass the review to become a LEGO product.

LEGO Minecraft Micro World can be pre-ordered at the Jinx online store. The idea owner of each realized LEGO CUUSOO project will receive 1% of the total net sales of the product. Mojang has already announced that it will donate its proceeds to charity.

Originally envisioned for the larger 2×2 LEGO brick scale, the final set will be using 1×1 plates with a tile on top for each Minecraft building block. The result is not a perfect cube like in the game, but “the best approximation at the chosen scale”, according to LEGO. Model designer Bjarne Panduro Tveskov added “[it] packs the most Minecraft DNA into the model per LEGO brick.” 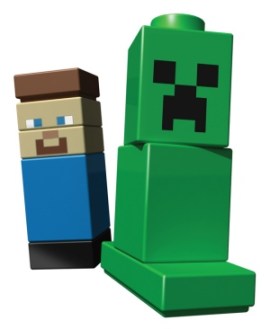 Real-world merchandise based on computer game IPs is nothing new and can generate substantial revenues. A whole series of action figures is based on Microsoft’s Halo franchise, and Angry Birds publisher Rovio has been particularly aggressive with marketing toys and related products based on its popular game. LEGO and Minecraft seem to be a particularly good fit, as they both have creation and building at their core.

LEGO’s own forays into the computer game market have seen mixed results. The company just shut down its massively multiplayer online (MMO) game LEGO Universe but has seen success with action-adventures based on other IPs. The LEGO group just extended its deal with Lucasfilm to produce LEGO Star Wars computer games for another 10 years.