In Minecraft, you’ll start with a single block of wood and eventually end with a fortress made out of diamonds and a portal that leads to the netherworld. Everything that happens in-between is the magic that makes Minecraft one of the biggest pop culture sensations in the world, and this review will strategically avoid ruining the secret sauce.

Minecraft: Xbox 360 Edition is an excellent opportunity for newcomers to the hit indie game and is already breaking sales records within its first day of release. The best-selling PC version is superior in several key ways, but for strictly console owners and those seeking a somewhat watered-down (and therefore less intimidating) introduction, this is exactly that.

The lightbulb moment(s)
Within the first few minutes of Minecraft, you’ll (likely) have a series of epiphanies as you begin to wrap your head around the core mechanics. Penny Arcade illustrated this perfectly in its comic. And those moments continue to happen indefinitely. Their frequency may drop off, but I felt like a kid exploring a Toys”R”Us for the first time more than in any other game, ever. There’s just so much stuff to pick up and play with and jam into something to see what happens….

Massive, massive worlds
Just when I thought I had seen the entire expanse of my randomly generated Minecraft world, I got lost for an hour and ended up several islands away from the safety of my home (and more importantly, my gathered items warehouse). After that, I felt like I had finally mapped out the overworld in my mind, only to soon discover another massive area with lava waterfalls and a gaping chasm leading into the middle of the earth.

This is all especially quite impressive (and, to be honest, overwhelming at times) considering that what you see on the surface is roughly just over a third of the actual explorable area. Then you start to dig, and soon you discover a cave. Then you run into a dead end in the darkness, and you dig some more, eventually discovering a seemingly endless series of underground chambers with underwater rivers and secret dungeons. 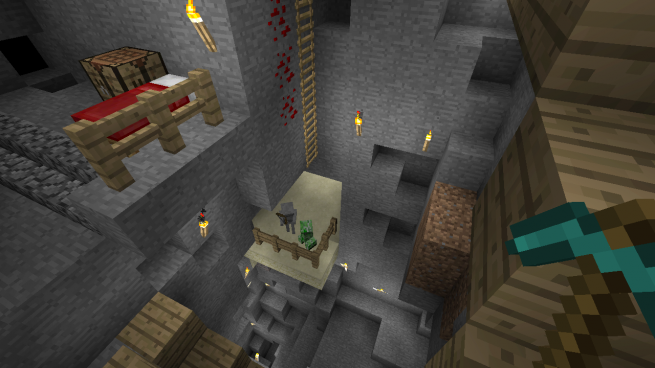 Compared to the near-infinite worlds in the PC version, the Xbox 360’s 1024×1024 grid probably doesn’t sound like much, but it’s more than enough to keep most gamers busy for the duration of their time with Minecraft. And if it’s not, you can always create a brand-new world at the press of a button.

Streamlined interface
In addition to an Xbox 360-exclusive tutorial mode, the inventory system has thankfully been simplified a bit. Whereas in the PC version you had to guess or know the crafting recipes, now the game tells you what you need and automatically creates the item for you once you provide the ingredients. A small touch, perhaps, but one that I think makes the game considerably more accessible.

Great multiplayer options
Unfortunately, lag, server issues, and other technical unpleasantness continue to plague the PC version of Minecraft. The Xbox 360 Edition doesn’t fall victim to such things and even adds some new ways to play with friends.

Within seconds, up to four players can hop into a local split-screen game, while up to eight can connect online. Or you can mix and match, so six players could play on three consoles over Xbox Live, for example. You know, that thing that Capcom said was impossible on the Xbox 360? Yeah, you can do that.

Multiplayer itself has lots of potential for cooperative and independent enjoyment in Minecraft. Exploration and discovery can be fun with others, but there are times where you’re digging for hours and just kind of zone out. Or at least I did. I didn’t want to eat or move or talk to anyone. I just wanted to keep digging. Though even if you decide to be a loner, just having friends to chat with is a nice touch.

Likewise, if you build a really impressive castle, it’s cool to show off to friends, but you also don’t want them setting it on fire or turning your master bedroom into a lava pool while you’re off gathering wood. Or maybe my friends are just assholes…. 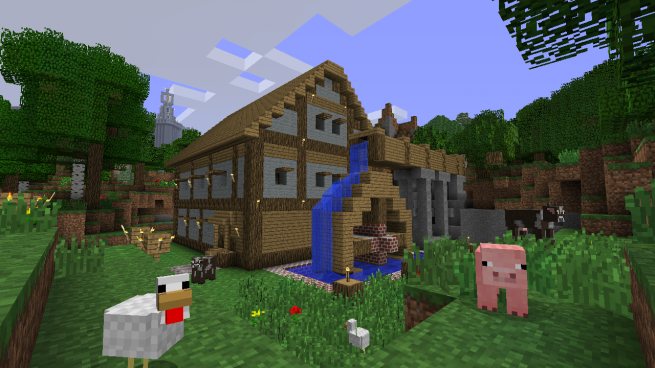 Combat
Minecraft comes with four different difficulties: Peaceful, Easy, Normal, and Hard. In Peaceful, you’re free to roam and craft and mine and do whatever without fear of being molested by the game’s obnoxious monsters. I’m not going to lie — this is my preferred mode. For me, the draw of Minecraft is discovering, collecting, and creating. I don’t want to have to worry about anything else, and I certainly don’t want to get killed by an enemy I can’t see or hit and drop everything I just spent hours mining for.

On the other three settings, however, the game introduces a set of enemies that typically come out at night: giant spiders, zombies, skeleton archers, etc. I’m not entirely against enemies in a game like this, but the combat is so poorly executed that it’s a constant frustration at worst and merely a constant chore at best.

The most hated of the bunch are creepers, which will quietly sneak up on you and then explode, damaging or killing you outright and leaving a giant crater in the terrain. Enemies are also quite plentiful, meaning you’ll often get ganged up on by zombies and spiders while a skeleton archer snipes you from afar, and then a creeper shows up at the end to finish you off.

It’s not “fun,” and I’d have quite a different opinion of this game if there weren’t an option to disable enemies altogether.

Limited items
Many hours after you’ve started Minecraft, there will still be an infinite amount of things to do and content to explore, but the type of items you can craft will be quickly depleted. Much of the craftable items seem arbitrary: You can create a suit of armor and sword…but no shield. You can bake a cake, cookies, and… mushroom soup? You can create a rowboat (that’s roughly the size of your leg) but not a tugboat or proper sailboat. The progression simply isn’t there — for every item you can make, there are a dozen perfectly plausible items that you can’t. Missing content
If you think the amalgamation of different item sets and enemies are already peculiar, then the missing content from the PC version would seem even stranger. Minecraft: Xbox 360 Edition is based on version 1.6.6 of the PC beta, which came out a year ago. Since then, a number of large updates have been released, including version 1.0 (non-beta) and the Adventure Update, which added a substantial amount of desirable content and features. In particular, the omission of strongholds, abandoned mine shafts, and ravines drastically reduce the variety when mining below the surface.

The famed Creative Mode is also MIA. In Creative Mode, there are no survival aspects or need to mine and collect materials — you simply create. Any time you see some ridiculously elaborate Minecraft masterpiece, it was probably built in Creative Mode.

These features and more are allegedly coming to the Xbox 360 “eventually” (along with Kinect functionality) via free updates, but they’re not here now, and it seems this version will always be several steps behind the original. On the other hand, some newer features like the hunger meter are more than welcome to never come at all.

No mods
This point won’t impact the review score, but fans of Minecraft will sorely miss the inclusion of user-made modifications. Cheats and hacks we can do without, but the various different skin and texture packs, as well as new locations and items greatly expand the Minecraft experience.

And for those who don’t know any better, just trust that you’re missing out on a lot of cool stuff….

The success of the PC version is a testament to the allure of Minecraft. Like its source material, Minecraft: Xbox 360 Edition has no shortage of flaws, but it also provides a wholly unique gaming experience that can last for untold hours, whether you’re mining alone into the deepest depths of your randomly generated world or crafting a giant Starship Enterprise replica with a crew of up to seven other players. At $20, Minecraft is one of the most expensive Xbox Live Arcade games ever released, but it’s also one of the most substantial and definitely one of the most enjoyable. Just remember your training as a child and don’t step on the lava….

Minecraft: Xbox 360 Edition was released for the Xbox 360 on May 9, 2012. The publisher provided GamesBeat with a download code for the purpose of this review.