MNectar came up with unique way to get players to view ads on mobile by creating playable segments of games that could be streamed directly to users. No downloads were necessary just to try out a game. Now mNectar is announcing Spectra, a cross-platform app-streaming network. 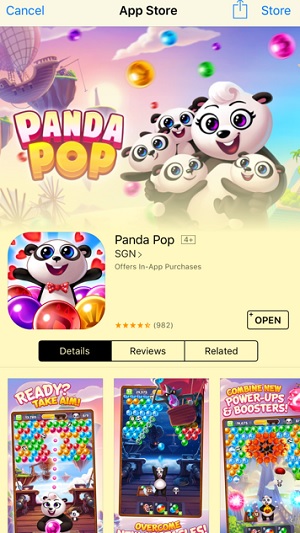 Above: mNectar has playable ads that promote Panda Pop.

In creating this network, mNectar has built a cloud-based content-delivery platform that can get games or apps into your hands without making you wait for them, and that’s important at a time when everyone has a nanosecond-long attention span.

In the playable ads, you tap on an ad and start playing the game or app that is being advertised.

“mNectar’s app streaming changes everything with how we interact with mobile,” said Wally Nguyen, the CEO of mNectar, in an exclusive interview with GamesBeat. “Downloads are dead. Consumers are getting less interested in downloading content, especially compared to how they stream on the web. They like clicking, but hate downloading.” 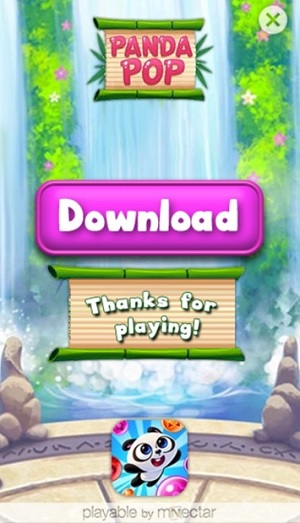 Above: Here’s what you see at the end of a playable ad from mNectar.

More than 200 mobile games currently use the Spectra platform, which has streamed millions of playable ads already. As of today, mNectar’s Spectra technology can stream the entire app library of the mobile ecosystem, including Google Play and Apple App Store, giving users the opportunity to sample far beyond their current portfolio. Because of the problems associated with downloads, users install around 10 apps a month but end up deleting 90 percent of them, Nguyen said.

Nobody really likes banner ads, and video ads have become extremely popular, but only because they tend to hold the user hostage in some way. Playable ads are opt-in, Nguyen said. Once you view a playable ad, you can resume the original game in the place where you left off.

“Consumers like the format more, as they never stop playing, and they’re more informed with this type of advertising,” he said. “They are not fooled by what they are getting by a static interstitial ad.”

Through Spectra, mNectar is able to transform any existing mobile app or game into a playable ad in a matter of minutes. Spectra virtualizes the mobile game on the backend and builds it as a playable ad. Unlike other app-streaming technologies, it requires no custom codes or modifications, Nguyen said.

The Spectra App Delivery Network streams the playable ad to any mobile device across any network connection, from Wi-Fi to LTE to Edge. Spectra can also drop a user anywhere inside a mobile game, allowing publishers to highlight a killer app moment that may otherwise exist behind a log-in or level, Nguyen said.

“This takes advantage of next-generation protocols we built in-house,” Nguyen said. “It took us about two years to do this. We are the only ones to have deployed this. We tried other services like Amazon Web Services, but we found we had to dig in deep and use our own.”

It took awhile to figure out how to build the back-end infrastructure and deal with the core issues to making streams work on even slow networks.

Nguyen said that playable ads have demonstrably greater engagement than interstitial or video ads, and that can drive increased revenue for publishers. User retention rates for playable ads are four times more effective than any other mobile ad format such as interstitials, and the retention rates are twice as good as mobile video ads, he said. People who instantly sample a game through a playable ad and choose to install tend to continue playing the game for a month or longer, making them highly valuable to game developers and advertisers.

MNectar has studied app reviews, and it found that apps get a higher rating after playable ads are integrated. It increases on average from 4.2 stars out of 5 to 4.6 stars out of 5, Nguyen said.

San Francisco-based mNectar has 25 team members and has funding from New Enterprise Associates.