The cost per install (CPI) for acquiring mobile users rose in July, showing that marketers are willing to pay more to get ads in front of the right audiences.

Fiksu, a mobile-marketing firm in Boston, reported that its data for July also showed that the cost to acquire loyal users (CPLU, or the cost for users that open an app at least three times) dropped 7 percent from the previous month to $2.98. But that amount was still 51 percent higher than a year ago, and that shows that it is costing more and more to get users for mobile apps and games.

The numbers continue to show that the cost of acquiring new users is becoming expensive, particularly as developers compete for attention among a few million apps in the iOS and Google Play app stores.

On iOS, the CPI increased to $1.43, a rise of 24 percent since June and an increase of 16 percent since last year. On Android, CPI rose to $2.73, up 29 percent since last month and up 115 percent year over year. Taken together, the decrease in CPLU and increase in CPI suggest that while marketers are spending more to target the right audiences, that targeting tactic is ultimately proving more effective in acquiring valuable long-term users.

“July’s results reveal the most important metric that marketers should be focusing on: the cost to acquire a loyal user. This month is indicative of what it looks like when marketers spend smarter,” said Micah Adler, the CEO of Fiksu, in a statement. “We can see month over month that marketers are still getting accustomed to this shift in audience targeting, but they are beginning to realize the power of putting the right messages in front of the right people at the right time.”

App downloads decreased by 10 percent over last month to 7.5 million daily downloads for the top 200 free iOS apps, according to the Fiksu App Store Competitive Index. Typical summer slowdowns have decreased supply, which is another contributing factor to the rise in CPI.

For September, Fiksu predicted that marketers should prepare to compete given the likely influx of in-app inventory. With the iOS 9 launch and new iPhones expected in the first few weeks of September, it will be a competitive time for advertisers who want to reach users as they are installing apps on their new devices. To prepare for the transition, this month will be a good time to initiate re-engagement with existing users to ensure your app is not removed or replaced, Fiksu said. 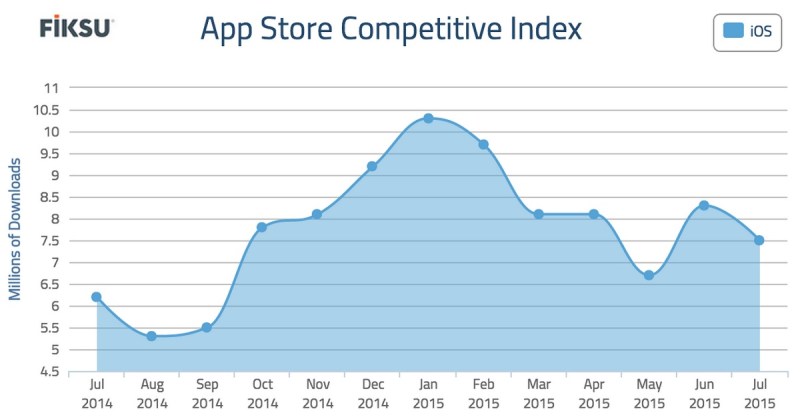