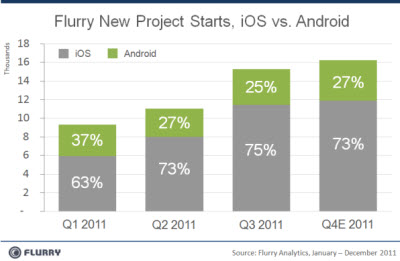 About 73 percent of apps created for the fourth quarter are based on iOS, compared with 27 percent for Android. Three quarters ago, the figures were 63 percent iOS and 37 percent Android.

Over 2011, developer support for Android has declined from a third of titles to a quarter of them.

That runs counter to the notion, recently declared by Google Chairman Eric Schmidt at the LeWeb conference in France, that Android is running ahead of the iPhone.

There is no doubt that Google has been gaining in the smartphone market. About 46.3 percent of U.S. smartphone subscribers use Android, compared to 28.1 percent for Apple in the three months ended in October, according to comScore.