AMSTERDAM — That supercomputer in your pocket will soon make Sony’s and Microsoft’s latest home gaming consoles look old and crusty.

ARM, the technology design company responsible for the chip architecture in mobile devices, is preparing for another big leap in computational power for smartphones and tablets. At the Casual Connect conference in Amsterdam this week, ARM ecosystem director Nizar Romdan explained that the chips that his company creates with partners like Nvidia, Samsung, and Texas Instruments will generate visuals on par with and then surpass what you get from the PlayStation 4 and Xbox One consoles by the end of 2017. That means we are about a year away from having smartphone and tablets that are capable of running the same games (at least graphically) that we previously bought dedicated gaming hardware for. This could bring more hardcore players into the $30 billion mobile gaming market, but it could also power the software for mobile virtual reality. Tech adviser Digi-Capital predicts VR and AR gaming on all platforms could generate $10 billion in revenue by 2020.

“Mobile hardware is already powerful,” said Romdan at Casual Connect Europe. “If you take today’s high-end smartphone or tablet, the performance is already better than Xbox 360 and PlayStation 3. It’s catching up quickly with Xbox One and PlayStation 4.” 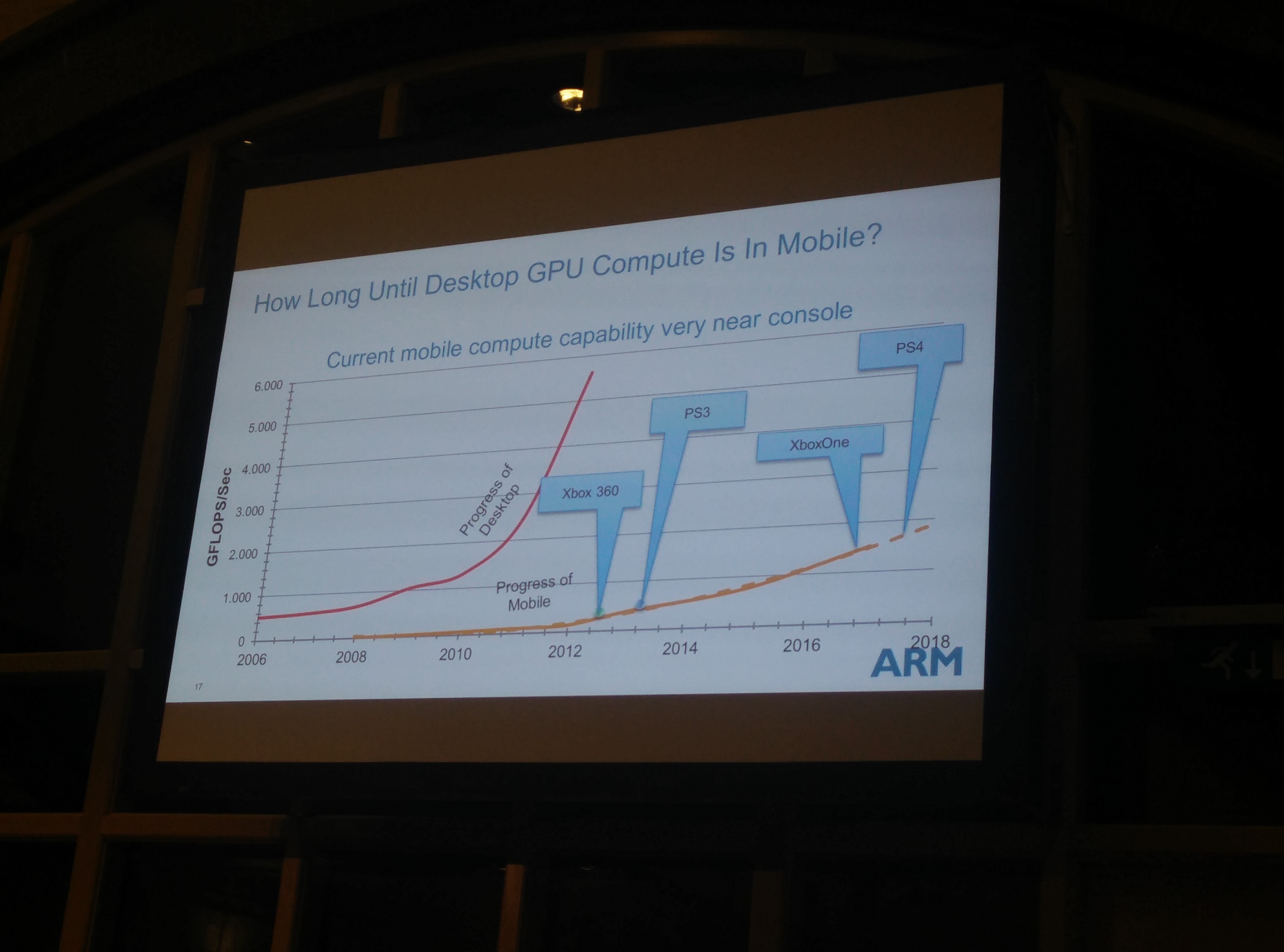 Above: A chart showing that ARM chips are coming for Xbox One and PlayStation 4.

To illustrate his point, Romdan included a chart that shows the relative power of consoles like Xbox 360, Xbox One, and PlayStation 4 in terms of their capability to calculate floating point operations per second (or FLOPS). PS4 can compute around 1.84 TFLOPS (tera FLOPS), and the chart shows smartphone chips approaching 2 TFLOPS by the last quarter of 2017.

Of course, this does not mean that publisher Ubisoft will start exclusively releasing new Assassin’s Creed games for smartphones. This is partially because the audience is different on mobile, but it is also because the form factor of a touchscreen-only device requires different kinds of human-software interactions.

Romdan points out that virtual reality eliminates that form factor difference. Wearing a headset on your face is the same if you’re tethered to a PC or using a Galaxy S6.

“Our view is that mobile VR is the use case that could unlock the potential of mobile for hardcore gamers,” he said. “For once, mobile devices are on par with PC and consoles in terms of experience [when it comes to the form factor of VR]. We won’t have the same processing. And battery life is a problem. But it is the same user experience. That could be a game changer for mobile gaming.”

Correction — Digi-Capital forecasts the entire market for gaming in VR and AR could be $10 billion, not just $15 billion for mobile VR.