Scopely, the publisher of mobile games like Yahtzee and The Walking Dead: Road to Survival, has raised $55 million in a new round of funding led by Greycroft Growth Fund. 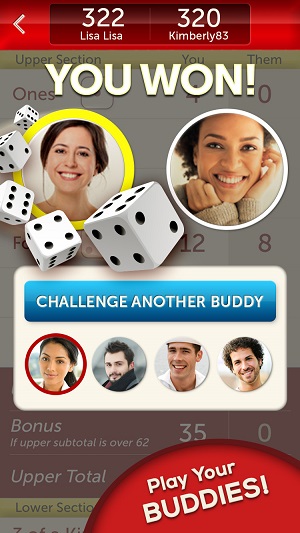 Above: Scopely’s Yahtzee with Buddies

The money will help the company expand aggressively in the $36 billion global mobile game market as the forces of consolidation make it tougher for smaller companies to survive. Over the past 18 months, Scopely has grown its revenues more than 550 percent, said Walter Driver, CEO and co-founder at Scopely, in an interview with GamesBeat.

“We’ve had six consecutive No. 1 top-downloaded games,” Driver said. “We have also had two of the top 10 grossing games launched in 2015. And we’ve got an exciting line-up of stuff to come.”

With the funding, Driver said, “We can be in a strong position to execute on the slate we have. We’re in the unique category of mobile game companies that are generating cash.”

The Walking Dead game, made with The Walking Dead creator Robert Kirkman and his company Skybound, has been downloaded more than 20 million times. Driver said the company is profitable.

Scopely is a mobile publisher with more than 200 employees. It commissions work from outside game developers who have another 300 employees. It has used this system to fund games such as Yahtzee with Buddies and the Walking Dead game.

“We have a differentiated, scalable model in the games industry that can create durable long-term revenue streams across multiple genres,” Driver said. “ Scopely’s growth has been driven by our focus on publishing and monetizing products which we can do systematically and sustainably. With Greycroft and our other world class investors, we have the capital and strategic guidance to take our model and leverage it across an even more diverse catalog and audience.”

“Scopely brings the technology, talent and monetization infrastructure necessary to launch products into massive global business that grow over time. Scopely is at the forefront of the consumer transition from a world of linear entertainment to a world of interactive entertainment,” said Terbeek, in a statement. “We’ve been tracking the company closely for years since our initial seed investment and have been incredibly impressed with the executive team’s ability to realize their vision and create more believers every step of the way.”

Scopely owns stakes in a number of the seven studios that it uses to make its games.

Above: Scopely’s The Walking Dead: Road to Survival

“We started by doing a publishing platform,” Driver said. “We add new studios, giving us the ability to work with cohesive teams with skill in a specific game design. We build a strategy around the best game studios. It is a more efficient structure. As a publisher, it is great to have diversity. As a developer, it’s good to have a focus.”

Driver said the company will add more studios to the fold, and it will work with intellectual property rights holders as well.

“We see the opportunity to take brands and characters and universes that people care about the most and create mobile experiences where they can spend time in those worlds every day,” he said.