Gaming is an international language, and a good reminder of that comes from the experimental gameplay and physics-based puzzles of Shapist.

Shapist is an interesting, logical block-sliding game that recently debuted as an exclusive on Apple iOS devices. I saw it on display at the indie showcase at the recent Casual Connect Europe conference in Amsterdam. Like Tetris, it’s an accessible experience that anybody can play, without instructions in any particular language. Such games are very hard to design, and they take a lot of thought, even if the mechanics are relatively simple.

“It’s a very pure experience,” said Ori Takemura, head of Qixen-P Design and the Shapist’s main designer, in an interview with GamesBeat. “There are no words. No messages. No numbers. I designed it as if it were a physical object. When you install it on an iPad, there is no menu.”  It takes about 30 seconds to grasp how to play, Takemura said. 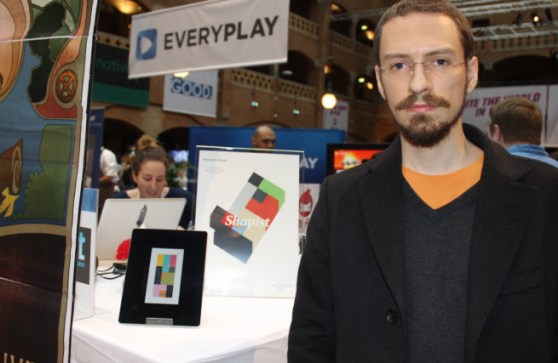 Shapist starts out with designs inspired by Singapore and makes its way to more Japanese-style patterns. After a while, the challenges become imbued with physics, which makes the puzzles tougher to solve. 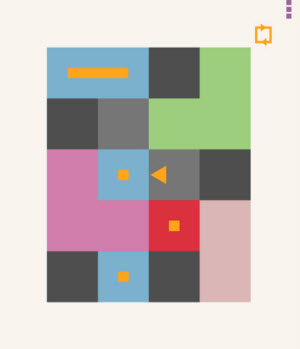 The game has international origins. It was created by Russian-born Takemura. He has a Japanese name and speaks Japanese fluently. He married a woman from Singapore, and they live there as a Singaporean citizens. He drew inspiration from classic tile-sliding puzzle games from Japan and China built from wooden blocks. For Shapist, Takemura had a Russian partner, Dmitry Kurilcenko, who helped make the game, even though the two have never met in person.

Takemura is a color-theory expert, and he used to design flower patterns on traditional Japanese kimonos (elaborate dresses). He tapped that expertise to create the patterns on Shapist. There are five schemes, starting with the most vibrant and then moving to “self-reflecting colors” like pastels.

But Takemura figured it would be more fun to reshape tiles — something you can do digitally but not in a physical wooden-block game. In Shapist, there are physical effects like magnetism. Some blocks will repel each other.

“I need to make special structures, so the magnets will push each other,” Takemura said. “The game gets more and more complex for the fans who like sliding-block puzzles.”

The $2.99 title has tested well with kids and women, and it received nominations at Casual Connect Europe for the “best mobile game” and “most promising game.”

Takemura has been making games for about 15 years, though that work was interrupted because he was creating kimono designs for a long time. Takemura made another game before with his wife, but it wasn’t successful in part because it was too complex.

“This is one that you can teach yourself to play,” Takemura said.