We’ve all read by now the news that mobile games had a big coming-out party during the Super Bowl,

According to data from iSpot.tv, four of the top five biggest TV ad spenders in the video game category for the first quarter of the year are mobile game companies, collectively spending over $130 million in 2015. King, Machine Zone, and Supercell (in that order) are the top spenders, representing 30 percent of the overall TV ad spend in the Video Games category. 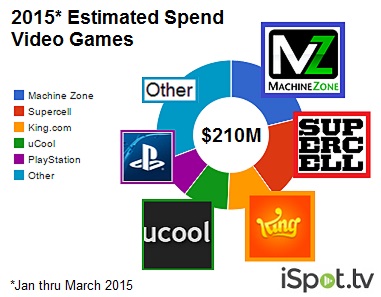 Part of this spike is due to certain video game industry realities. Last year, console manufacturers were the top spenders in the video game category because both Sony and Microsoft blitzed airwaves with details of their new generation devices (the PlayStation 4 and Xbox One, respectively). Together, they accounted 36 percent of the category. This year those two brands account for only 10 percent during the same period.

And the first quarter of the year is generally a quiet one for console game developers, who generally don’t start their ad blitz en masse until the fourth quarter, when their big-budget releases come out. 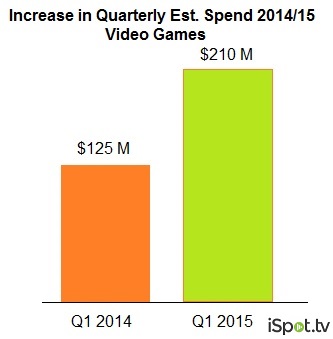 But these trends don’t take away from the fact that mobile game companies are spending more than ever before on TV advertising. Brands like Machine Zone—of Game of Ware: Fire Age and supermodel Kate Upton fame—represented only 6.7 percent of the TV ad spend in the first quarter of last year but now accounts for 21 percent during the same timeframe this year. Likewise, Supercell, developer of Clash of Clans, went from 10 percent to 22 percent during the same period. TV ad newcomers such as Ucool, which started running spots in December, represent 11 percent of all spending in video games this year so far.

What’s more, these ads are resonating. This year so far, Supercell’s TV ads not only gained more online views than its direct mobile gaming competitors, but they also went more viral than ads from video game giants such as Activision, Sony, Electronic Arts, and Ubisoft. Of the total digital buzz attributed to video game commercials from 27 advertisers and 90 commercials in 2015, 77 percent goes to Supercell. Its much-discussed spot featuring Irish actor Liam Neeson aired just once during the Super Bowl but earned 48 million online views.

Now these spending patterns may merely indicate that mobile games are taking advantage of the relative lull in major game console advertising. It will be worth watching how mobile game TV advertising continues as the year progresses, especially during the big Q4 holiday push (as well as during earlier big releases, as we’re starting to see a surge around the upcoming release of “Halo 5: Guardians”).

But so long as this TV ad push results in more app downloads, we may likely be seeing a new long-term competitor to the mix.

Sean Muller is the CEO of iSpot.tv, the company that tracks real-time paid TV media and related earned digital activity across social, search and video.