Mobile gaming is growing so fast that it’s expanding the traditional video game industry far beyond its old borders.

Tim Merel, the managing director of game investment bank Digi-Capital, issued a report today that predicts mobile games could drive the whole game software industry’s revenues to $100 billion by 2017, making it one of the most lucrative sectors for entertainment and software. He said the mobile and online game sectors could grow at a compound annual growth rate of 23.6 percent to $60 billion by 2017. 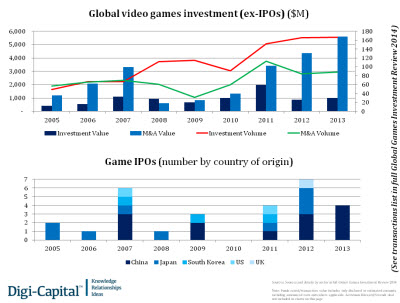 “Competition for growth is intensifying, as the new kids on the block harness the energy in the cycle to take them to the summit. However, this is an elite marathon not a sprint, so long-term engagement performance is just as important as short-term success,” Merel said in a statement.

Mobile games and Asian activity drove mergers and acquisitions to a record $5.6 billion in 2013 (and that’s excluding $2.3 billion from the management-led portion of the Activision Blizzard/Vivendi spinout), up 29 percent from 2012. The average deal grew 23 percent from 2012 to $63.8 million.

“While many deals were focused on growth, there was considerable consolidation for pivot and turnaround strategies,” Merel said.

He noted that Asia is becoming the biggest driver of economic value in mobile and online games, with the best companies’ revenue growth and profit margins becoming the envy of foreign competitors. Merel predicted that Asia and Europe combined could take more than 80 percent of the global revenue share for mobile and online games. Nine of the top 10 game M&A deals of 2013 had Asian buyers, compared to eight out of 10 in 2012. Thirteen out of 15 game initial public offerings from 2011 to 2013 were by Chinese, Japanese, or South Korean companies.

Merel said that game businesses are now operating in multiple regions around the globe. A lot of this fits in with our theme of Total World Domination at our upcoming GamesBeat 2014 conference in San Francisco on Sept. 15-Sept. 16. 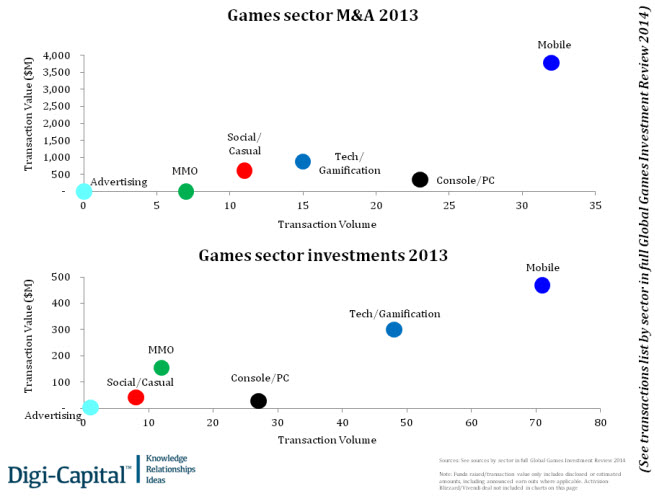 Above: Game mergers and investments by category.

Meanwhile, the launch of the new game consoles is beginning to address the console decline of recent years, but Merel said questions remain about how many new machines the vendors will sell.

“Where 2013 was a year of transition, we anticipate 2014 to be a year of both growth and disruption for the games market,” Merel concluded. 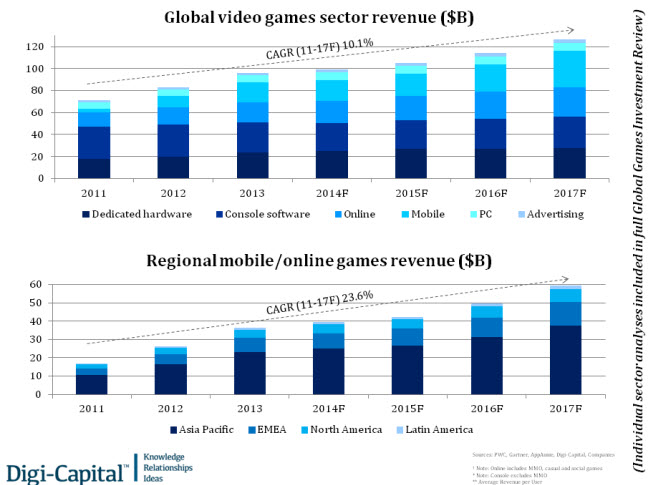 Above: Game sector and region revenue.