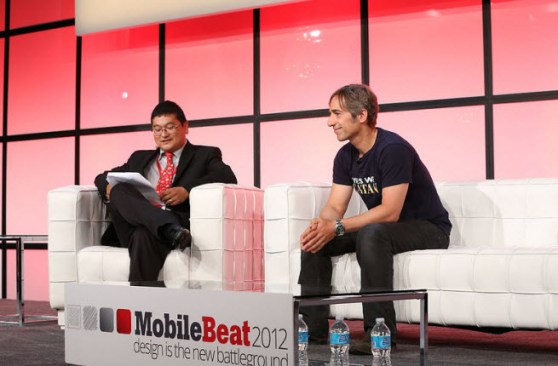 Zynga’s mobile gaming business is growing fast and now accounts for 20 percent of its bookings, according to company chief executive Mark Pincus (pictured above) while speaking on a conference call with analysts. Zynga’s stock is rising in after-hours trading thanks to a stock-buyback program and beating analysts’ reduced expectations for the third quarter.

That’s a much larger proportion than in the past, though it is down from the previous quarter because of the rapid decline of Draw Something, the Pictionary-style game that Zynga bought with the $180 million-plus purchase of OMGPOP in the spring. Zynga took a write-off of $95 million related to that acquisition, as the value of OMGPOP has declined to a level beyond what Zynga paid for it.

Despite the big disappointment with the OMGPOP acquisition, Pincus said the social-gaming giant’s fast-growing momentum on mobile is encouraging. Zynga now has the No. 4 mobile network of any apps in the U.S., and it has three of the top five mobile games. He said Zynga reaches 30 percent of mobile users, and its players play 10 billion minutes a month of mobile games. At the same time, mobile is a challenge for Zynga because it is a fragmented market and distribution is more limited than on the web.

Zynga expects to launch two web games a quarter and four mobile games a quarter for the foreseeable outlook. Pincus also said that FarmVille and ChefVille are doing well on the web and on Facebook. FarmVille 2 has 61 million monthly active users, including 500,000 who are buying goods in the game for real money. In a single day, players recently spent $950,000 in the game. FarmVille 2 grew to 17 million installations in its first 21 days.

“We had a major breakthrough with FarmVille 2,” he said. “We showed we could bring a major 3D game” to the market. CityVille 2 is also coming soon.

Pincus said the recent acquisition of A Bit Lucky will lead to the company’s entry into the mid-core gaming market — which is in between hardcore console games and casual games — early next year. This could help Zynga reach more traditional hardcore gamers, who spend more money than casual gamers.

Zynga has started bringing more third-party games such as Horn to its mobile network as well as other games to the web-based network. The idea is to reach more genres and more game types faster by leveraging the talent of third-party game developers. Pincus said in the next year that the company will “continue to turn the network conversion on mobile.

Zynga is testing out all of the available genres, as more of the genres are available.