Social casino games have become a multibillion-dollar worldwide market, and now mobile is becoming a bigger share of the revenues, according to a report on first-quarter revenues by market analyst firm Eilers Research.

Mobile now accounts for 46 percent of all social casino game revenues worldwide. In the first quarter, mobile grew 13.8 percent from the previous quarter, while Facebook desktop social casino game revenues were down 0.8 percent. Mobile is expected to become the majority in the next quarter or so. That marks a shift that’s consistent across the board with many digital game categories.

This bodes well for companies that have taken the leading mobile market share. Caesars Interactive Entertainment, publisher of Slotomania and Bingo Blitz, has top games on both Facebook and mobile. It widened its lead as the sector’s top company in the first quarter, growing its market share to 17.8 percent, up 15.7 percent from the previous quarter. Caesars acquired Pacific Interactive in mid-February, further boosting its share in the category.

IGT’s Double Down Casino is No. 2 with 11.2 percent market share, up 1.6 percent from the previous quarter. Zynga is No. 3 with 8.8 percent share, down 2.8 percent in the quarter. The one-time social-gaming king is about to launch its new version of Zynga Poker on mobile in a bid to regain lost share. GSN, which acquired Bash Gaming, is now No. 4 with 8 percent, and Big Fish Games is No. 5 with 5.1 percent share.

Eilers predicts that the social casino game market will grow 31 percent in 2014 to $2.6 billion. The research firm noticed a steady increase in revenues in Asia among companies like Tencent, Aruze, Sammy Networks, Asobsim, and Mobage. In the first quarter, total revenue was $590 million, up 5.5 percent from the previous quarter.

Zynga, which reports quarterly earnings on April 23, saw its share shrink as it saw a revenue decline on Facebook with its Texas Hold’Em Poker title, but it saw some gains from Hit it Rich! Casino Slots and Zynga Poker on mobile. 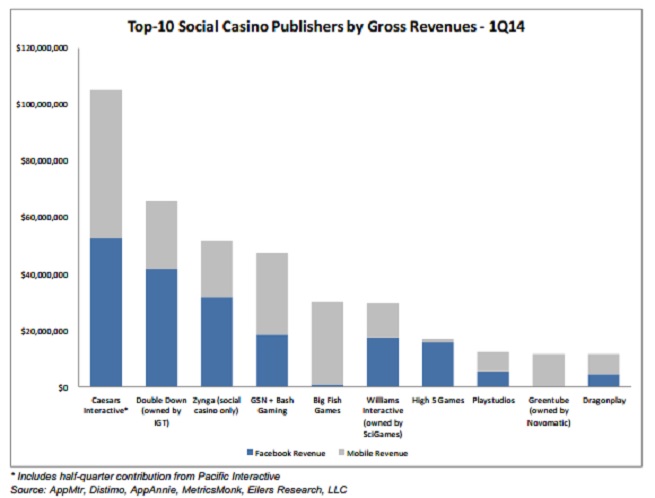