The goal is to help the mod community, where sophisticated users modify existing games with new enhancements (mods) that gamers can choose to adopt, for Torchlight. If the mods are popular, they can generate more players for an existing game.

“This is an excellent community and we’re really excited to have the staff at (RGF) join the ModDrop team,” said ModDrop CEO Skylar Kreisher in a statement. “The Torchlight modding scene remains very active and we hope to further energize the community by empowering mod developers with ModDrop’s robust publishing tools.”

RGF started hosting mods for Torchlight in 2009 and expanded to include Torchlight 2 mods in 2012. Today RGF is home to the complete collection of Torchlight mods on the internet. This brings a steady flow of new visitors to the site, which in turn encourages mod developers to continue producing great content.

But ModDrop said that the dramatic rise in the use of ad-blocker has made it difficult for small communities like RFS to stay afloat.

“Over the past several years I’ve seen a lot of game communities disappear and I didn’t want the same thing to happen to us,” said RGF founder Chase Webb. “I’m glad that ModDrop is stepping up and offering to save sites like RGF. To put it simply, if ModDrop hadn’t appeared, you almost certainly would have lost nearly every Torchlight mod remaining on the Internet.” 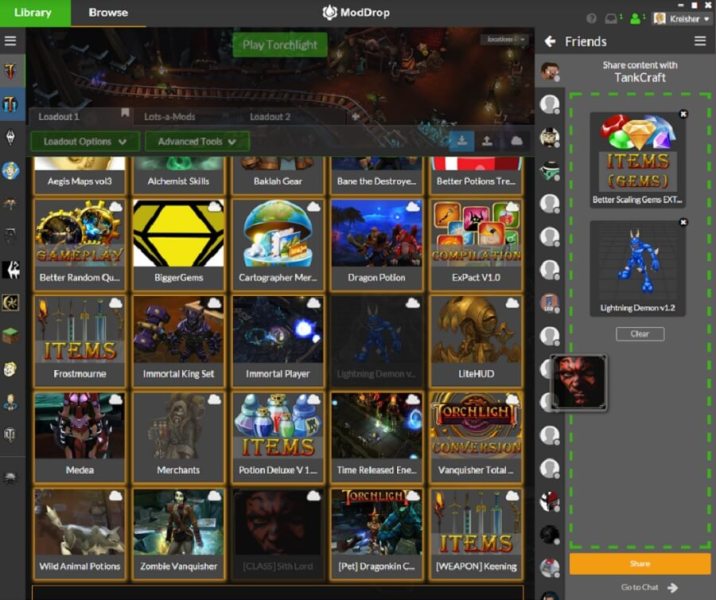 Developed by Runic Games, Torchlight and Torchlight 2 have received high praise among gamers, with “Very Positive” and “Overwhelmingly Positive” reviews by Steam users.

Built by former Blizzard employees as spiritual successors to the early Diablo games, the Torchlight games offered fans refined hack and slash gameplay in the action role-playing game drought between Diablo 2 in 2000 and Diablo 3 in 2012. Even today, as Diablo 3 reigns as king of the genre, Runic believes the Torchlight games offer a unique and compelling experience, thanks in no small part to the thousands of diverse mods that players can use to customize their games. Finding and installing these mods is now easier than ever with the help of the ModDrop platform.

“ModDrop is about making mods accessible to everyone,” said Kreisher. “We want gamers to experience the joy of playing and sharing mods, not the frustration of file management. We knew the user experience had to be as simple and intuitive as the technology was powerful if we wanted ModDrop to make an impact.”

Today, ModDrop supports over a dozen games, including popular titles like Minecraft, The Witcher 3, Fallout 4, and The Elder Scrolls V: Skyrim SE. Webb believes ModDrop will amplify community engagement by making it easier than ever to find and install mods. Seattle-based ModDrop, owned by Olympus Games, launched in 2015.

“It’s the kind of utility that fans have wanted for years, and we were simply unable to provide. Now with ModDrop, players can download and install mods from our (RGF) site with a single click,” Webb said.