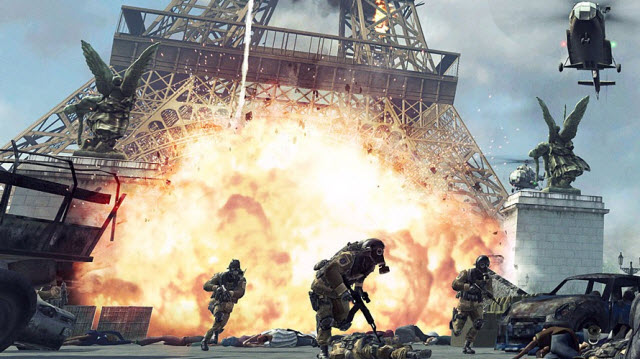 First-day sales of Activision Blizzard’s Call of Duty Modern Warfare 3 set a new all-time record, with the game selling more than 6.5 million and generating $400 million in revenues in its first 24 hours, the company said.

Those sales numbers apply to sales in the U.S. and the United Kingdom on Tuesday Nov. 8. The first-day sales beat those of last year’s first-person shooter game, Call of Duty Black Ops, which sold more than 5.6 million units for $360 million on its first day. By comparison, Electronic Arts sold 5 million copies of Battlefield 3, a rival game that debuted Oct. 25, in its first week.

The sales numbers are based on sell-through data from Charttrack and retail customer data. While some game publishers such as Sony count sell-in numbers, which are based on shipments to retailers, Activision Blizzard said its numbers are based on sales to consumers. Call of Duty has now shattered records for day-one sales of any form of entertainment for three years in a row.

Call of Duty Modern Warfare 3 has received critical praise, and we’ve given the single-player campaign and multiplayer game high review scores. But Activision is still trying to restore regular uptime for users of the Call of Duty Elite social network, a new online service that has been flooded with too many users since day one. Multiplayer play is functioning normally.

Two years ago, Call of Duty Modern Warfare 2 sold more than $310 million worth. This time, more than 13,000 stores opened at midnight around the world for the opening day of Modern Warfare 3 sales. Microsoft said the number of concurrent gamers playing multiplayer online set a new record after two days of play.

“We believe the launch of Call of Duty Modern Warfare 3 is the biggest entertainment launch of all time in any medium, and we achieved this record with sales from only two territories,” said Bobby Kotick, chief executive of Activision Blizzard.”

Activision announced that, on Veterans Day, it is donating $3 million to the Call of Duty Endowment, a nonprofit that helps place returning veterans in jobs.