In a sign of consolidation for the middlemen of the game business, mobile monetization firm PlayHaven is merging today with analytics firm Kontagent.

Analytics and mobile monetization have become crowded markets in the past year. So companies like PlayHaven and Kontagent are pulling together to get more scale and to become one-stop shops for their developers. Analytics alone has become a commodity, and companies like Flurry and Playnomics are moving into markets that take the analytics and do something with it.

PlayHaven has created a platform for game developers to manage their player acquisition, engagement, and monetization for apps and games at every point in the life cycle, from before installation, while players are in the app, and after they’ve left. Kontagent provides analytics so developers can gather data on player behavior and use it to tweak games and apps so that they produce better results. Together, the companies will build a one-stop shop for developers, and it will reach 400 million monthly users across 22,000 apps and 1 billion devices.

Andy Yang, the chief executive of PlayHaven, becomes CEO of the combined company, while Josh Williams, CEO of Kontagent, will become chief technology officer and chairman of the new firm.

“This is a massive game-changer — not only for PlayHaven and Kontagent but for our customers and the broader mobile industry,” Yang said. “Together, we are bridging the gap between insight and action in an unprecedented fashion.”

In an interview with GamesBeat, Yang said that the strategic visions of the companies were the same: to make the world’s data and make it actionable. He said the companies had common customers such as Glu, Electronic Arts, and Big Fish Games. Those customers were asking how to properly integrate PlayHaven and Kontagent, which were coming from the opposite ends of the business. Kontagent was built on analytics and data science, while PlayHaven enabled actions for monetizing apps, Williams said. But there wasn’t so much overlap that they shared all of the same customers; there will be an opportunity for cross sales now.

“It was a no-brainer for us to combine,” Yang said. “It was either get married or fight later. We decided to get married.”

The user-acquisition, analytics, and revenue-optimization field is crowded. Companies like Chartboost, Tapjoy, and Fiksu are constantly improving and offering new technologies to developers. PlayHaven definitely hit a large scale as it saw its platform being used by developers billions of times a month. Yang said he believes that the deal will make competitors think about doing similar deals.

“I see this as the first domino to fall,” Yang said. “It’s a very fragmented market in mobile. Mobile is growing extremely quickly, and you have to move fast. You need to get the data and take action as fast as possible. As a customer, you don’t want to deal with 20 different service providers to do that.” 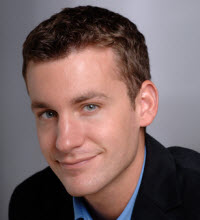 Above: Josh Williams of Kontagent.

Both PlayHaven and Kontagent have evolved with social and mobile gaming, and their own paths illustrate the constant readjustments that the surviving companies have had to make as the markets have changed.

PlayHaven last raised $8 million in November 2012, getting money from GGV Capital, E.ventures, and Tandem Entrepreneurs to fuel an international expansion.

PlayHaven has had an interesting journey. It started life as a gamer’s social network, and then it tried making communities for mobile games. Yang joined as CEO in the spring of 2011 and changed its business to something that worked in early 2012. It created an HTML5 overlay that can pop up inside a game. Developers use the overlay to create custom offers for their partners. The pop-ups are ads, and PlayHaven built a large ad network to serve ads into the pop-ups. Those ads are more welcome by the player because they relate to what people are doing in a game.

Kontagent began life in 2007 and it came to focus on providing analytics for social games. It provided a lot of the data on social games and helped fuel the enthusiasm for the rapid growth of social games. Albert Lai, the cofounder of Kontagent, was fixture at conferences where he provided data in the days when Facebook was a lot more forthcoming.

Then it raised $12 million in the fall of 2011 to take its social analytics to mobile. Investors included Battery Ventures, Maverick Capital, and Altos Ventures. Lai left the company and co-founder Jeffrey Tseng steered the company toward providing more services, like deep dives into big data, beyond standard analytics.

Williams said that no money changed hands in the transaction and all of the investors are excited about the merger of equals.