GamesBeat: That was something I had wondered about as well, but you really nailed the feeling of making these moves look awesome without dumbing-down the game. What did you do on the development side to find that balance between bringing in these great-looking new moves and having them fit in the Monster Hunter universe?

Tsujimoto: We spent a lot of time on getting that balance right. As we mentioned, if you get the impression that they’re just big and flashy and they’re not Monster Hunter—just to reassure people, this is absolutely Monster Hunter gameplay. You can’t just go up and hit a move and it’ll blow a monster away. It’s still a game of reading the monster reactions, finding the right timing, dodging at the right time. It isn’t just a hack-and-slash game. You feel really cool, but it’s still up to you to be skillful. The game isn’t doing it for you.

We want to bring out a new kind of accent, a new kind of approach, while keeping true to the series. Capcom has done that before with games like Street Fighter. That’s a very long-running series, and after a certain amount of time you want to bring the action to a different level. You want to add more cool visual effects, or even totally change the visual style like in Street Fighter Alpha. But we’re always careful to make sure that when we reinvent a series, we don’t reduce it. We always stay true to the series’ core. 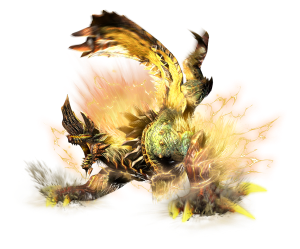 Above: The Thunderlord Zinogre, one of Generation’s new deviant monsters.

GamesBeat: What’s your favorite aspect of Generations? Is it something big or something small.

Tsujimoto: To give you a big thing and a small thing, the big one is the prowler mode. It was great to be able to include a totally new way of playing Monster Hunter. It’s an intriguing feature for veterans, something that lets them come to grips with a new way of playing Monster Hunter, and it’s a great entry point for new players to try a version of hunting that’s not quite as intimidating off the bat.

The small thing that led to that is when you’re a prowler, to gather items you can just hold the A button. You don’t need to keep pressing it. It’s a tiny change, but you really get spoiled by that once you try it. [You can do this in all modes, not just prowler –Ed.]

Kojima: I really enjoy seeing older NPC characters from previous games make a comeback appearance. If you recognize them, you’ll think, “Hey, I met that guy in the village back in that game years ago.” It’s a very nostalgic feeling for players who’ve been with the series a long time. And if you’re a newcomer, you’ll be meeting all these classic characters for the first time. I hope players can have a conversation about that. If you’re relatively new but your friend has been around, he can tell you, “Yeah, that guy did this in one of the old games.” It’s a talking point for players, regardless of their experience level with Monster Hunter.

GamesBeat: With Generations, we’ve seen two years in a row now that the U. S. has been lucky enough to get a Monster Hunter game. Is one of your goals going forward to make this an annual series?

Tsujimoto: Even in Japan, we’re not dogmatic about whether this is an annual franchise. We don’t have to release one every year. With the number of games that have come out in Japan, it may have wound up being annual, more or less, but it isn’t because we decided to make that a deadline. 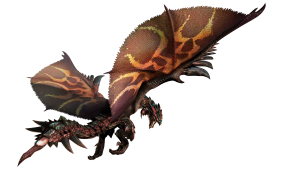 Above: The Dreadking Rathalos, another new Deviant monster in Generations.

Talking about the west, as you say, this is the first time we’ve had two years in a row with a new Monster Hunter game, which is great for our fans. We’ve seen a lot of feedback from players about the amount of time it takes us to bring a new game over from Japan. Localization has to be done. We’ve tried to refine that process and make it more efficient, so that we’ve been able to make that gap shorter and shorter. This is the shortest wait we’ve had so far. It’s still a matter of months, but in the past some titles have taken up to a year. We’re getting closer and closer to the Japanese release time frame.

In the future, I’d love to be able to reduce that wait even further and get Monster Hunter out simultaneously in the U. S. and Japan. We’ll keep doing our best to bring our games to western players as fast as possible. We appreciate everyone’s patience.

GamesBeat: With Generations, is there anything you’ve done specifically for new players to help them get acclimated? Monster Hunter 4 and Monster Hunter 4U had a lot of features that helped in that regard.

Tsujimoto: 4U and Generations both tried to make sure that new players could ease themselves into the world of Monster Hunter, whether it’s through quests that let you practice different weapons, or in Generations where we have quests for specific styles as well. First-time players can be a bit overwhelmed by the amount of things you can do in the game.

But it’s important to let them remember the set of actions that are available to them and know what tools they have at their disposal, and then let them put those to use in a series of increasingly difficult quests, so they feel the real satisfaction of learning. That’s one of the things Monster Hunter does so well. It’s a key part of the series as a whole, that sense of achievement you get from putting your knowledge to good use and finally slaying that monster.

With Generations in particular, the prowler mode is great for that. Every Monster Hunter game has been about having these weapons and tools at your disposal, but you have to watch the monster’s behavior and read their tells and understand their moves, so you’ll be able to dodge whenever they attack and use that opening to counterattack. It’s never been a game where you could just run up and hit the enemies.

To get to that point, though, you have to have a chance to observe the monsters. Some new players have had a hard time balancing watching the monsters and staying alive as a hunter. Prowler mode offers a great opportunity, because the prowlers can actually burrow underground and move around unseen. That lets them avoid most monster attacks for a while. It gives you a chance to hang back and take time to observe without feeling like you’ll get killed at any moment. That’ll help you come to grips with the game even quicker than before. I highly recommend that for newcomers.