I’m not the biggest Monster Hunter fan in the world … although, ironically, I did enjoy Monster Hunter World. Something about the boost in presentation and graphics made it more appealing to me. I was worried that a Switch version of Monster Hunter would be disappointing.

Much to my surprise, I like Monster Hunter Rise for Switch even more than World. This newest iteration in Capcom’s cooperative action-RPG series comes out March 26. The Switch does have a port of a 3DS Monster Hunter with Generations Ultimate, but Rise is the first game in this series made specifically with Nintendo’s hit console in mind.

Although the Switch is underpowered compared to Monster Hunter World’s platforms (PlayStation 4, Xbox One, and PC), Capcom has been able to make a game that still looks nice. It also has some gameplay enhancements that’s going to make it hard for me to go back to the series’ older games.

Out of all the new features, the Palamute is the best. In previous Monster Hunter games, you have cat companions named Palico that can join your hunts. The wolf-like Palamute helps further by attacking your targets, but you can also get on its back and ride it.

This makes getting around Rise’s large maps a lot more fun. The Palamute can even scale some walls and drift around tight corners. You can also use items while riding, so you can sharpen your sword or swig a potion while pursuing a fleeing monster. You can also attack while you’re on your Palamute if you’re looking to get some quick damage in.

The Palamute helps make playing Rise fun even if you’re aren’t with friends. Having both a Palamute and a Palico makes you feel like you have a full squad, even if you don’t have any other human players with you. And unlike the Palico, you can actually take your Palamute with you during co-op hunts. 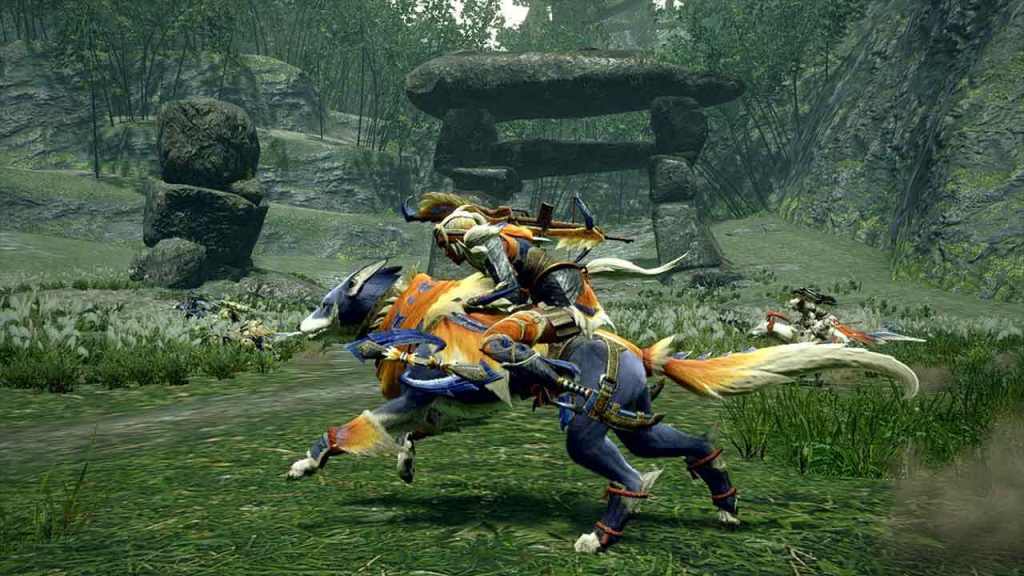 Above: Sadly, my real dog is much too small to ride.

The wirebug is the other big addition. This is essentially a grapple hook, and it’s a versatile tool.

It helps a lot with getting around, as you can use the wirebug to help you scale up cliffs. You can also use it on defense. It can fling you out of harm’s way if a monster is charging toward you. Offensively, the wirebug can help you launch yourself into the air to attack your target from above. It also unlocks a few special attacks for each weapon.

Movement in Monster Hunter games has always been slow and methodical. The wirebug speeds thing up just enough so that fights feel a bit more fair and less frustrating.

I love Monster Hunter World’s hub town, but it’s a bit too sprawling for its own good. Rise has a more condensed staging area, which makes it easier to do your shopping, upgrading, and eating before you hunts. It also looks lovely. While World has an age of exploration fantasy vibe, Rise takes its visual cues from Japanese history, with torii gates and shrines dotting the hub town of Kamura Village.

Although the levels you hunt monsters in are a bit less exciting to look at (they follow the typical themes of a forest stage, an ice stage, a fire stage, and so on), they still look good … for a Switch game. Yes, that sounds like an underhanded compliment. But you may be spoiled by World’s beautiful levels, with their fancy lighting effects and dense foliage. Rise’s hunting grounds get the job done, even if they aren’t as detailed. And if the levels themselves don’t wow, the monsters still look great thanks to some superb animations. 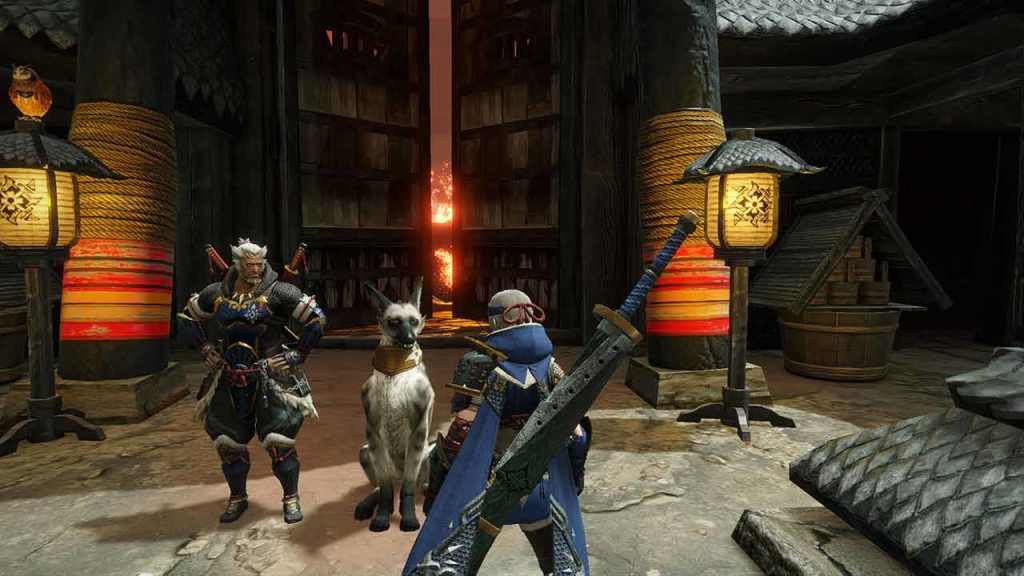 Above: Kamura Village is a pleasant place for prepping.

Rampage is an addition I’m not as enthused about. This is a kind of tower defense mode. Monsters try to break through walls and enter your town, and you have to set up turrets and other obstacles to slow them down. Or you can just go fight them directly.

It’s fine. Honestly, I’ve never been a big tower defense fan anyway. And for Monster Hunter, I’d rather just go fight monsters directly then set up traps or plant turrets. It’s not an bad game mode, but it’s one that doesn’t interest me.

A fast start to a wonderful adventure

You know what I do like about Rise? The pacing.

Monster Hunter World has such a slow start. It spends too much time setting up its story and easing you into game. Rise has a much faster start. It doesn’t have the same emphasis on narrative, which is just fine with me.

Instead, Rise is all about hunting monsters. Which, you know, seems appropriate for a franchise named Monster Hunter. Capcom has done a great job bringing this series to Switch, and new features like the Palamute and wirebug make this a more fast-paced experience.

Rise is great by yourself (with the help of your Palico and Palamute) or with online hunters. Capcom did have its servers active for a portion of the review period. Joining someone’s game was easy, and I was surprised by how smooth the online experience felt. When it comes to Switch, my expectations are always low when it comes to online capabilities, but Capcom seems to have it figured out. Of course, we’ll see just how stable things are once the game launches and many more players flood those servers.

Honestly, I’d be just fine playing Rise by myself. The core gameplay loop of hunting monsters so you can make stronger equipment in order to hunt more monsters is captivating, and Rise has put that formula into a package that works great on Switch.

Monster Hunter Rise comes out for Nintendo Switch on March 26. The publisher sent us a eShop code for this review.