Monster Hunter went big with this latest installment. The action role-playing series had found a comfortable place in the handheld world, but Monster Hunter: World brings the franchise to the PlayStation 4 and Xbox One when it launches on January 26 (I played it on my PlayStation 4). A PC version is following later this year.

I’ve dabbled with Monster Hunter in the past. I’ve enjoyed it, but I never became addicted. But Monster Hunter: World is impressive. This isn’t an updated version of some portable game. It’s beautiful in a way I’d never have expected from this series. The world is lush with life, the sunsets are stunning, and the monsters move with convincing animations and personalities that make them believable despite their outrageous designs. If you told me a game would have me fight a giant lightning lizard that’s part flying squirrel, I’d have assumed it would be comedic. But in Monster Hunter: World, this creature is majestic and frightening.

Monster Hunter: World has a ton of content, and it’s constantly rewarding you for delving deeper. 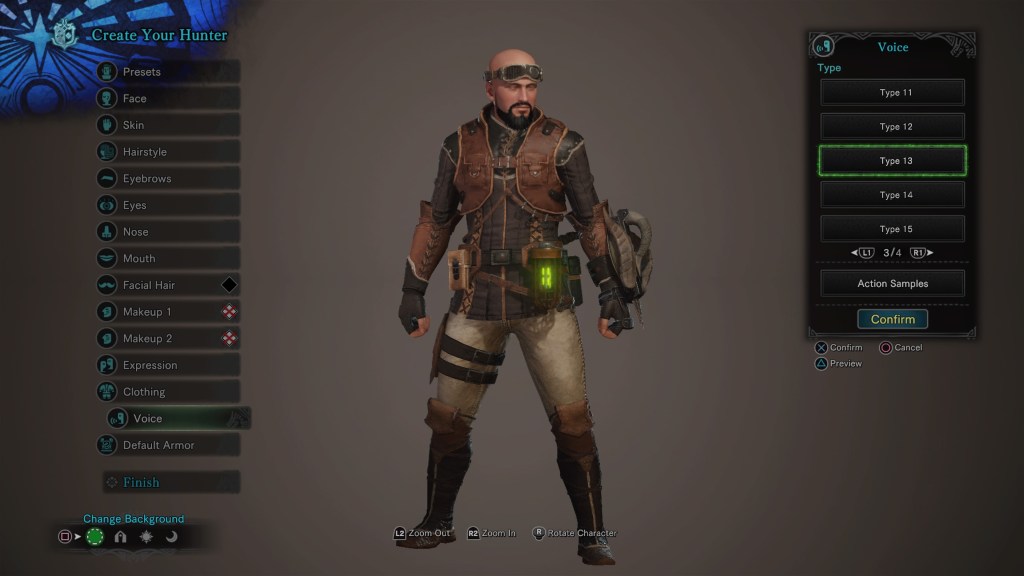 Above: My hunter is bald like me. That’s what character creation has come to in my life.

Most of Monster Hunter: World revolves around, well, hunting monsters. These encounters usually have two phases. At first, you’re tracking your prey. You explore and look for signs of the monster from things like footprints and claw marks. Find enough of these, and you can begin to track the beast via some fireflies (yeah, it’s another waypoint system, but it’s a pretty one).

When you find the monster, you have a lot of options. You can just run in and start swinging your weapon. You can lay traps. You can search for higher ground so you can jump on its back. These fights are long and difficult, so preparation is often necessary. Most beasts will try to run away from you after taking a beating, so you’ll have to give chase, track them again, or take the opportunity to collect yourself and heal up.

Basically, a lot is going on. These fights are interesting and dynamic, since you can approach them in so many different ways. Even the environment can have an impact. A monster can fall into a pit, or a bigger creature can appear and insert himself into the fight. You’re not just spamming an attack button and occasionally dodging or countering an attack. 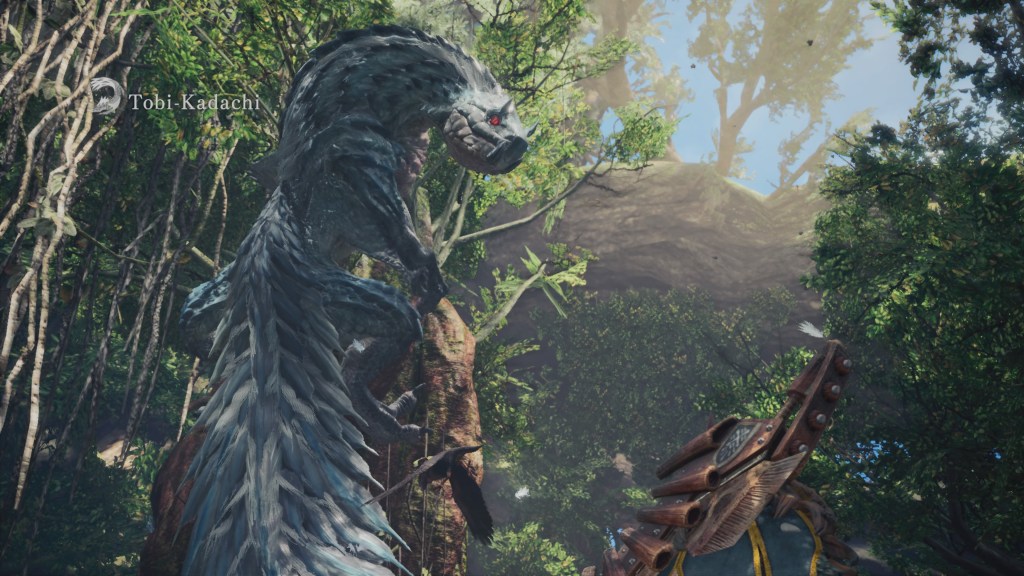 Above: It’s a monster’s world.

Weapons dictate your playstyle, and each one has a different feel. Some are straightforward, like giant swords or hammers that are slow to swing but deal a lot of damage. Others are much more complex. For example, a bagpipe/giant club can attack enemies while creating songs that buff players. You can try all these options and find a style that suits you. I know I thought the bagpipes were cool and all, but I went with a simpler giant sword.

Variety also comes via upgrades. When you’re wandering the world, you can collect plants, ore, bugs, and more. You also harvest parts from monsters. You can use these to craft items like potions, ammo, and — most importantly — armor and weapons. After almost every hunt, you’ll have parts to help you upgrade or create something new.

You can play Monster Hunter: World alone just fine, but the game makes it easy to quest with others. You can host your own session or join others from the game’s main hub town. Once connected, players go about their business until one starts a quest. At that point, others can opt in to join or stay behind at the town waiting for a different activity. You can also join players if they’re in the middle of a quest.

If you want even faster cooperative play, you can shoot a flare during missions that enables other players to join you immediately. You can also search for others who shot a flare at your base. It makes it easy to quickly ask for help or jump into another person’s session. 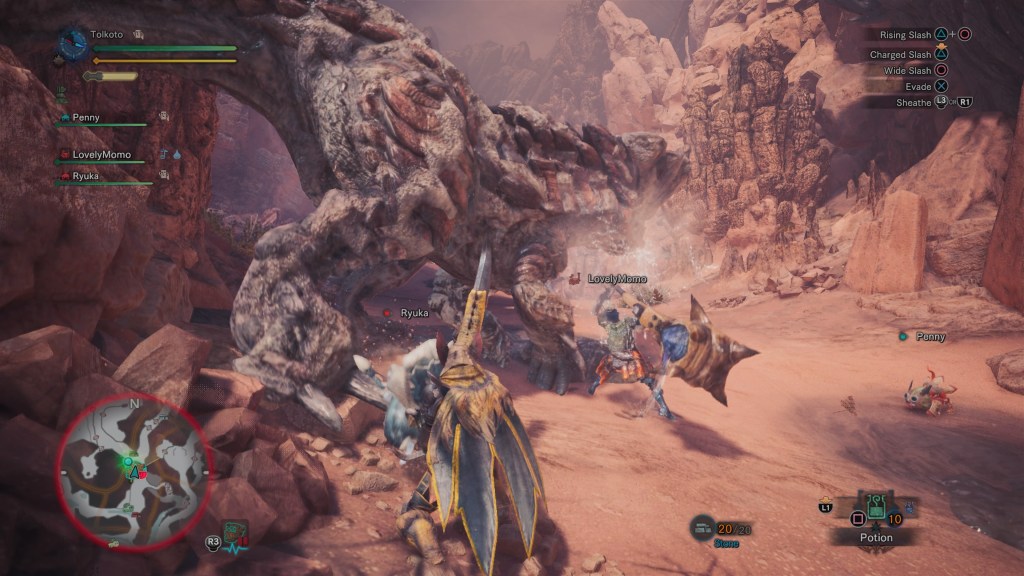 Monster Hunter: World is often stunning. The game’s hub, a multi-level base made of tents, ships, and giant bones, is one of the cooler video game locations I’ve seen in some time. I played Monster Hunter: World on a PlayStation 4 Pro, and the 4K and HDR settings made the colors and lighting effects stand out.

The game’s levels teem with life and magnificent vistas. Tracking down monsters is made much more enjoyable just because the world is so interesting to look at.

The world also has plenty of character. You can eat a meal before going out on a quest to get a buff to stats like attack power. But you don’t just navigate a menu. A funny and clever cutscene of cat creatures preparing your meal plays out. Moments like that add a lot of character to Monster Hunter: World. 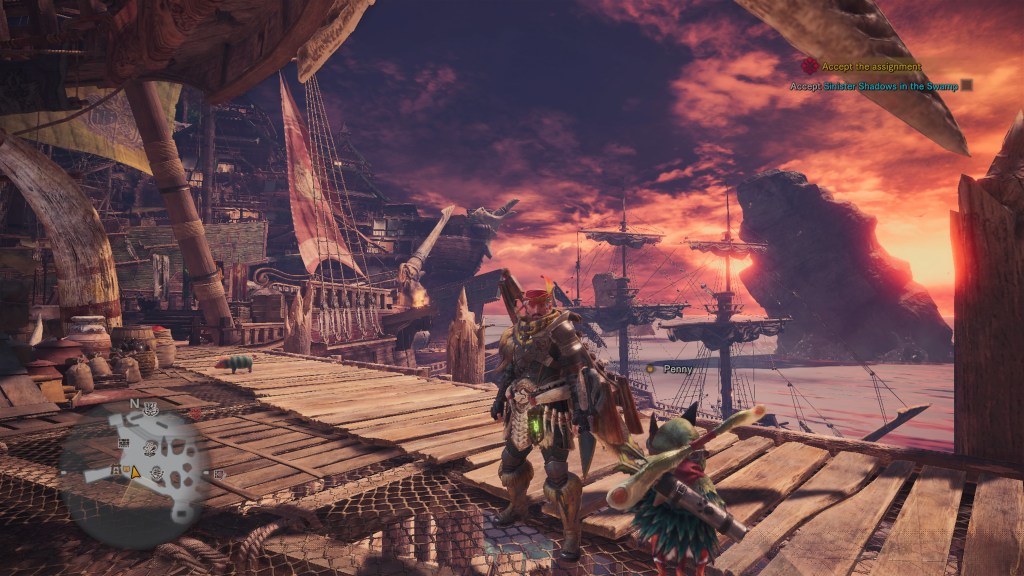 Hunting monsters is fun. But it does begin to feel familiar. Although the beasts have unique abilities, a lot of fights play out the same. You track them, you beat them up a bit, they flee, you chase, you beat them up some more.

Monster Hunter: World is one of the more rewarding action role-playing games I’ve played in recent years. The game is enjoyable either solo or with other players, and it manages to take advantage of modern hardware to envelop you in a beautiful world.

I never got into Monster Hunter before, but now I can’t wait for this game to officially be out, so I have more people to play with.

Monster Hunter: World is out on January 26 for PlayStation 4 and Xbox One. The publisher sent us a PS4 code for review.