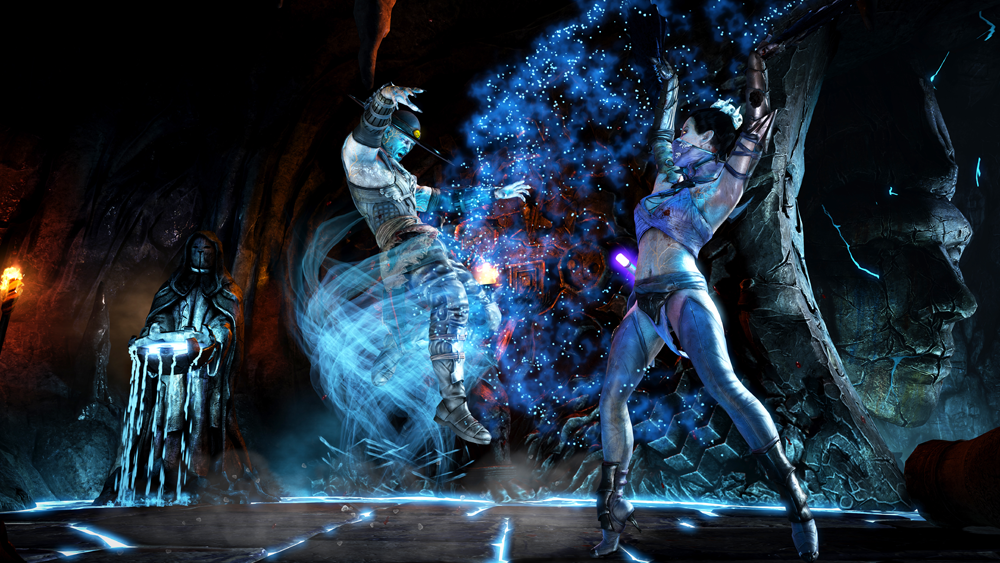 Above: Why do I keep getting mind gamed into this blue glitter hurricane combo?

I’m not feeling the footsies

If you’re heading straight to the comments section to flame me over my review score, here’s your money quote: What I want in my preferred fighting games does not seem to plug into what Mortal Kombat X, and perhaps all NetherRealm Studios’ games, offer.

One of my major incompatibilities revolves around the mind games in Mortal Kombat X, which in a nut shell, seem awkward and limited.

All fighting games rely on this basic principle of baiting and switching your opponent. Veterans of the genre call this “footsies”, a term derived from Street Fighter II where a player would float in and out of the maximum range of an opponent’s attacks, and start tossing short and medium low kicks. The player performing the kicks is trying to bait his opponent into reacting in a bad way, perhaps throwing out an unsafe move that won’t hit the kicks, so they are open for a counter.

That’s not the one and only form that mind games take place. Intelligently throwing fireballs at each other from across the room can be a form of this. Footsies show up in a lot of different forms in many different ways. Great 2D fighting games will allow a variety of these situations to flourish. The thing is, Mortal Kombat X makes some design decisions that seems to strengthen one style of mind game while weakening the others. 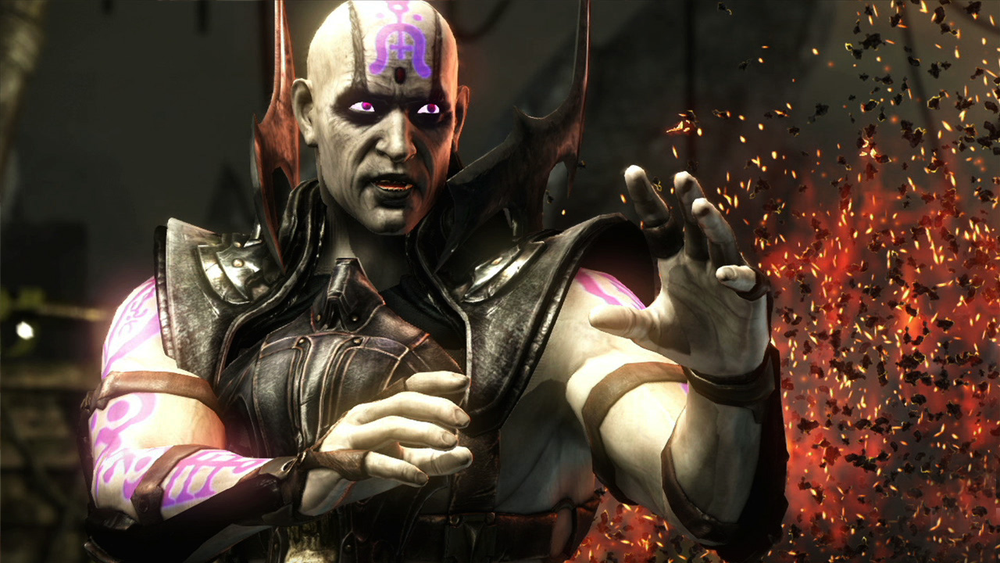 Above: I’m reading your mind. You will eat my mid-chain combo.

One thing I feel that is causing this is that a significant amount of characters had their bread-and-butter damage coming from chain combos that hit in the mid or high areas. A chain combo system enables me to use a predetermined attack string by simply “dialing” in the right button sequence without worrying too much about timing. As long as the first hit connects, the rest of it will come out as long as I am not completely mashing the pad.

Some characters in the roster either lack, or have incredibly weak, chain combos that start from a low move. Even fewer start a chain combo from a low move that requires pressing down, which is unintuitive. Since one of the rules in Mortal Kombat X’s combo system is that special moves (Scorpion’s spear) can’t combo off of non-chainable normal moves, that hurts you when attacking low even more.

What I am getting at is that mid/high chain combos seem to trump everything. If an opponent screws up and are open to punish, the optimal counter is almost always a parth to or from a non-low chain combo.

So my match experience in Mortal Kombat X seemed to always come down to only one form of footsies in the end: close range hit confirm. Who could put their chainable normal out quicker than the other and catch someone not blocking. If I put my attack out and it hit, I could dial in the rest of the combo into a juggle. If the initial attack is blocked, I can either go back to block and hope my opponent can’t hit the move while it pulls back, or dial in the combo hoping the opponent will open up.

It’s not that the other forms of mind games aren’t there. For example, I can get into a situation where we’re tossing projectiles at each other across the room while jockying for an advantageous distance. I’ve also been in scenarios where I’m trying to get the opponent to block high so I can hit them low. Low isn’t terrible in this game, it’s just not as good as mid/high for a good chunk of characters.

The thing is, although these situations are present, Mortal Kombat X seems to favor the close hit confirm game over all of these other options. There are too many other fighting games out there vying for my attention that offer the same hit confirm situation, and much more, in terms of the mind game. 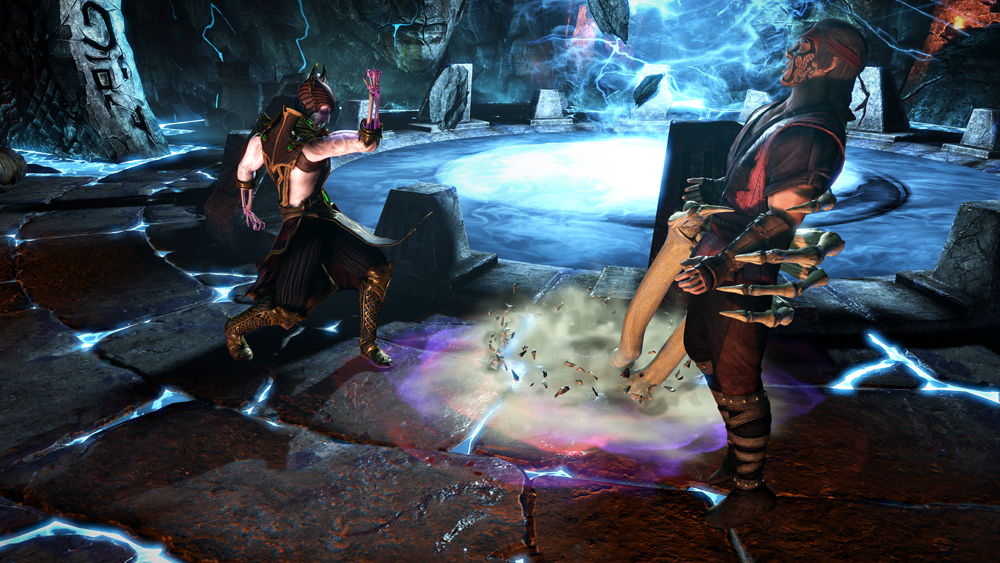 Above: Gawd-darn it! I was trying to forward dash, block, so I could bait your stupid skeleton hand. But I sprinted into it like a danged scrub instead!

Speaking of squashing other forms of footsies, let’s talk about running. I don’t mind the concept. Running in Mortal Kombat X is essentially extending the forward dash, which can be useful for offense. It’s even tied to a meter, so I can’t just run around the entire match. That’s good! What’s bad, then? I have to activate the run by double-dashing and pressing block.

I really hate this control scheme. It murders a really basic tactic, doing a dash into a block. I have several reasons to block after dash. In one case, it can close the gap on an opponent trying to stay away from me. If they’re mixing up their projectile game, I can dash during an opening and immediately block another projectile.

Where I use it the most is to try to fake an offense. I try to dash within range of an opponent’s counter and then block to see if they do it. If they do, tada! I have my opportunity to punish.

Instead, I’m sprinting right into my opponent’s arms. It’s aggravating that this simple, universal, tactic is shut down. Put the damned run option onto another button! Above: You thought my ice ball move’s animation was too long to wind up combo’ing off of my punch chain combo? That was just an elaborate illusion! Huzzah!

Earlier I praised the art department, but now I have to ding them, because I am convinced they weren’t listening to those working on Mortal Kombat X’s frame data. The visual animation of some moves does not match what’s happening underneath the hood.

As I mentioned, NetherRealm Studios has put a huge emphasis on chain combos. So much so that they’ve adopted a rule where special moves (like Scorpion’s spear) can only combo off of chainable normal moves. Technically, trying to two-in-one a non-chainable normal into a special won’t work. It’s a weird decision, but the problem I have here is visual.

Mortal Kombat X has many instances where a combo that isn’t supposed to work under this system looks like it should work — often more so than the combo that actually works. Some non-chainable normals can be canceled, visually, quicker than their chainable counter parts! Yet they won’t combo?

Adding to this illusion are the overly long reel-back animations. When a character is hit, they go into a hurt … or reel back … pose. This visually tells me how much time I have to try to connect another move onto my opponent, creating a combo. In Mortal Kombat X, these animations take forever. These slight visual missteps give off the impression that the fighting engine, and the combo system, is arbitrary and broken. Above: I swear that I hit block. Who the hell is streaming Netflix while I am trying to play Mortal Kombat X?

I don’t expect my online fighting games to be perfect representations of offline play. Too many roadblocks are involved to make that possible in 2015. Still, I do what I can to make my online experience as good as possible. I use wired controllers and a wired connection to my router, and I make sure no one is on the network when I play.

Mortal Kombat X’s online experience was still disappointing. I live right next to a lot of press organizations and developers, who I know had the game at the same time I did, and yet I couldn’t get one good connection going.

The in-game lag itself was a constant frustrating barrage of dropped inputs. Blocking something like Raiden’s Superman move on reaction, which is a very quick move offline, felt impossible.

This sort of laggy fighting game experience is just horrible. When I lose, it’s frustrating. When I win, I feel like a complete fraud. Hopefully this will improve, on my end, as more west coast players purchase the game.

Just … get the hell out of here with that.

Besides it just being an odd thing to monetize (please don’t sell an “easier move input” DLC), the whole point of Fatalities (besides being secret) is that they require a modicum of execution skill to pull off, and to that point, it’s like taking a victory lap all over your opponent’s battered body. This is like making a touchdown then paying someone to do the in zone victory dance for you.

In some ways, Mortal Kombat X surprised the hell out of me. The art direction is superb, the fanfare is lovingly crafted, and so much interesting single-player content’s going on that I’ll never have to deal with playing online. The Faction War, in particular, is just the right addictive factor to keep me considering logging in daily, if only for a quick session, just to help my group out.

In other ways, I really can’t find an enjoyable groove in the fighting system itself, which is the most important part of the experience. I’ll admit that it’s partially my fault. I like my mind games to have certain things going on, which maybe isn’t compatible with Mortal Kombat X. But part of the blame is definitely on NetherRealm Studios, with strange system decisions and move animations that are implemented poorly.

I want to go back to Mortal Kombat X after this review to unlock everything, but I also don’t see this game becoming one of my main fighting game staples, either.

Like I said, my relationship with this game…it’s komplicated.

Mortal Kombat X is out now for PlayStation 4, Xbox One, PlayStation 3, Xbox 360, and PC. NetherRealm Studios provided GamesBeat with a PlayStation 4 retail version of the game. Stephen is currently tagging BART trains with ‘Brotherhood of Shadow FOR LIFE!”