Most of us that were around for the first fighting game explosion of the early ’90s tend to split off into two camps when it comes to the Mortal Kombat series. Those of us that dropped out of love for the games after Mortal Kombat II and those that stuck it out to become lifelong fans.

I’m in the group that broke up with Mortal Kombat after II.

Regardless, I appreciate NetherRealm Studio’s 2011 reboot of the series and I’m glad fans can enjoy a modern update of Ed Boon’s goresploitation baby. But, like my feelings towards the franchise in late 1994, I walked into the demo for Mortal Kombat X (PlayStation 4, Xbox One, PlayStation 3, Xbox 360) questioning where the concept could possibly go from here.

I had my own theories for sure, but I wasn’t expecting this. 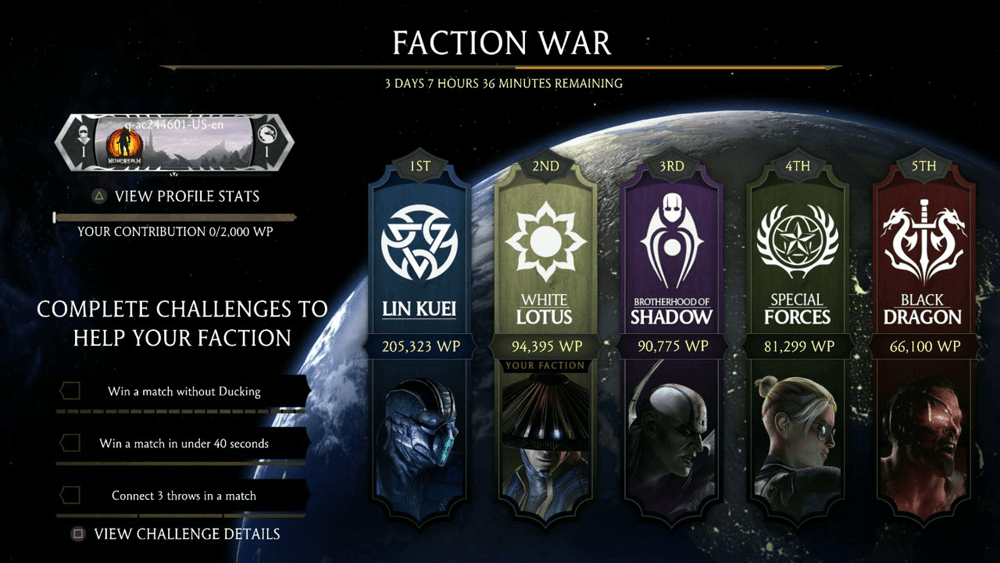 Above: Welcome to Mortal Kombat. Since chances are extremely good that you’re going to wind up horribly mauled, why not die for a cause?

The realm of Mortal Kombat is at war. Although we’re talking about a world where people can split torsos in half with their bare hands for fun. So I have my doubts the place experiences peacetime very much.

Before Mortal Kombat X lets you do anything, it forces you to choose one of five factions: The Lin Kuei, White Lotus, Brotherhood of Shadow, Special Forces, and Black Dragon.

Once players pledge their allegiance, every game mode that they participate in will earn them faction points, which are used to both level up their individual accounts (through a Warner Brothers ID account) as well as help with their group’s war effort. At the end of the week, the army with the most points wins the war, with members of the winning faction reaping the spoils via special rewards. 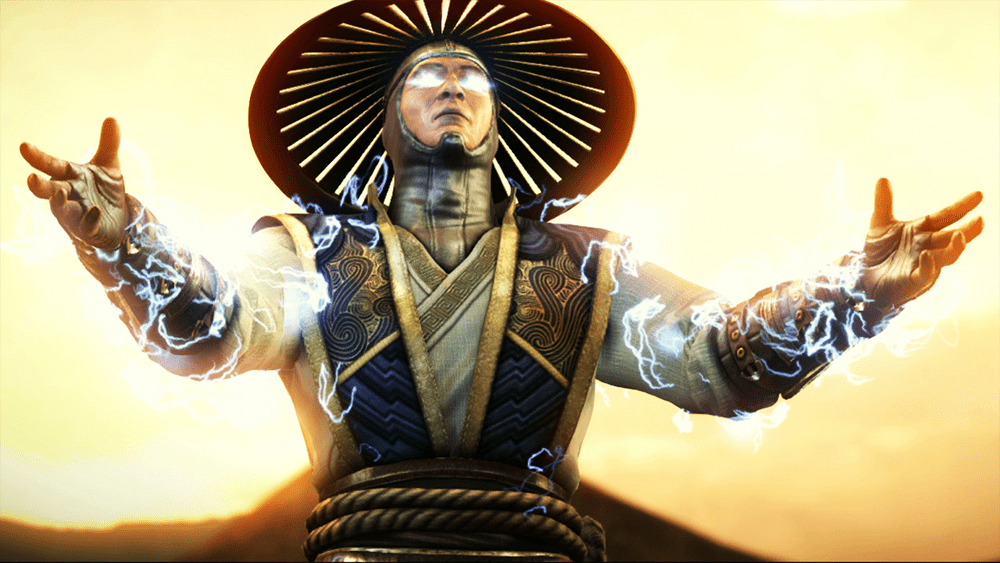 Above: Wait! Please don’t close the door! I just want to discuss the life benefits of joining the White Lotus. Hold on! At least take some literature! I’ll slide the pamphlet under your doormat!

Factions also feature their own specific, player-level unlocks that are gained by ranking up within the group. Leveling up within the faction also does not reset when the weekly war is over. So even though the battle restarts with all group totals at 0, the player’s stats can progress.

Being disloyal and leaving one faction for another, however, carries consequences. All points and perks earned in the previous group are reset and do not carry over. Rejoining the same army later on does not bring those points back, either. So players need to be absolutely sure that they join up with the gang that they want to run with for the entire game. 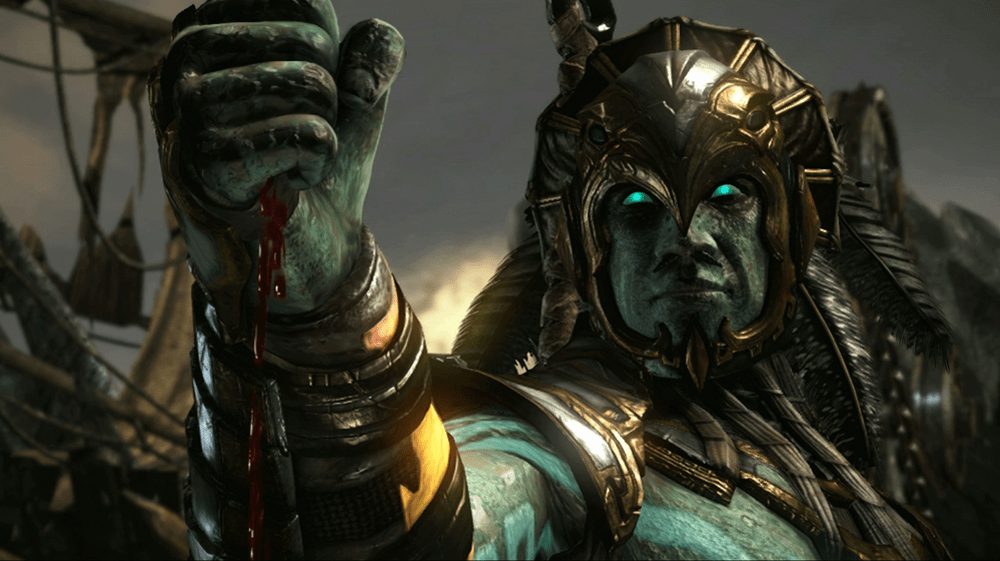 Above: Hold on. You want me to climb THAT Tower?!? Are you mad?

The obstacle based mode from Mortal Kombat 2011, Challenge Tower, makes a return in Mortal Kombat X, but this time as a much more organic experience. NetherRealm Studios is splitting the concept into three timed challenge stacks: Quick Tower, Daily Tower, and Premiere Tower.

Quick Tower will feature a stack of moderate challenges, which NetherRealm estimates will take an average skilled player 20-30 minutes to complete. The Quick Tower is set to refresh with a new set of challenges every two to three hours.

Daily Tower is similar to Quick Tower but contains a much more involved set of obstacles that reset every 24 hours. Premiere Tower is a much more brutal, week-long set of challenges that will be themed around special events, holidays, and promotions. 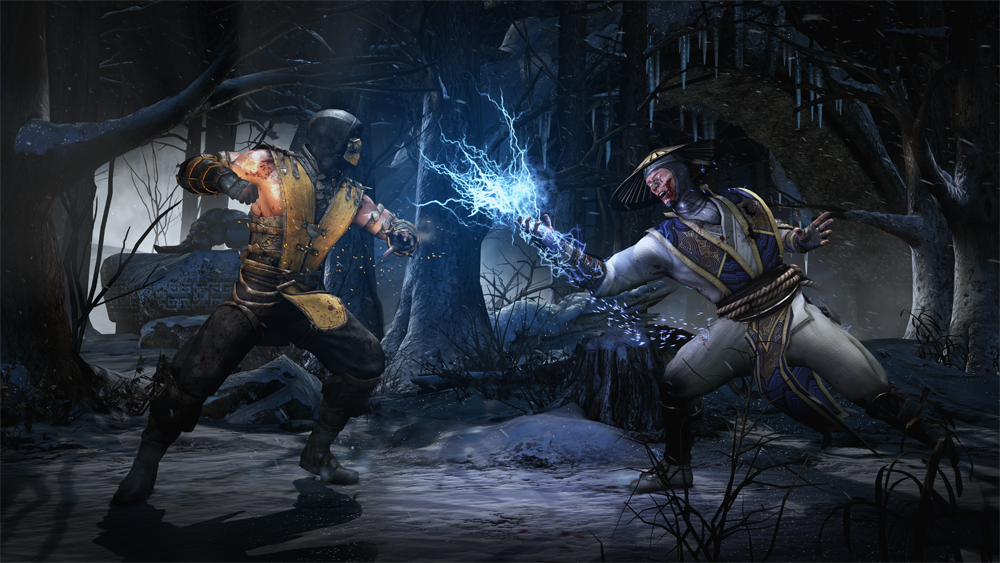 Above: Pull it…I dare you!

Another slight tweak from 2011’s Challenge Tower concept is that challenges are not character specific. Players can use whoever they want to clear any of the obstacles presented in this mode.

Technically, it can be claimed that both Factions and Living Towers constitute online experiences. NetherRealm Studios was using language to suggest as much, but in the design’s current state they are only “online” in that an Internet connection is needed to feed information to the Factions system or have the Living Towers update its challenges. Someone could technically never play a single head-to-head match against another human being, yet still have participated in these two online modes.

NetherRealm Studios is concerned about players that strictly want to play Mortal Kombat X alone, which may be a larger demographic for the series than I am aware of. These two modes are meant to give this portion of the audience a sense of progressive online content, without having to actually interact with anyone, as opposed to the usual single player campaign that is more of a “one-n-done” playthrough experience. 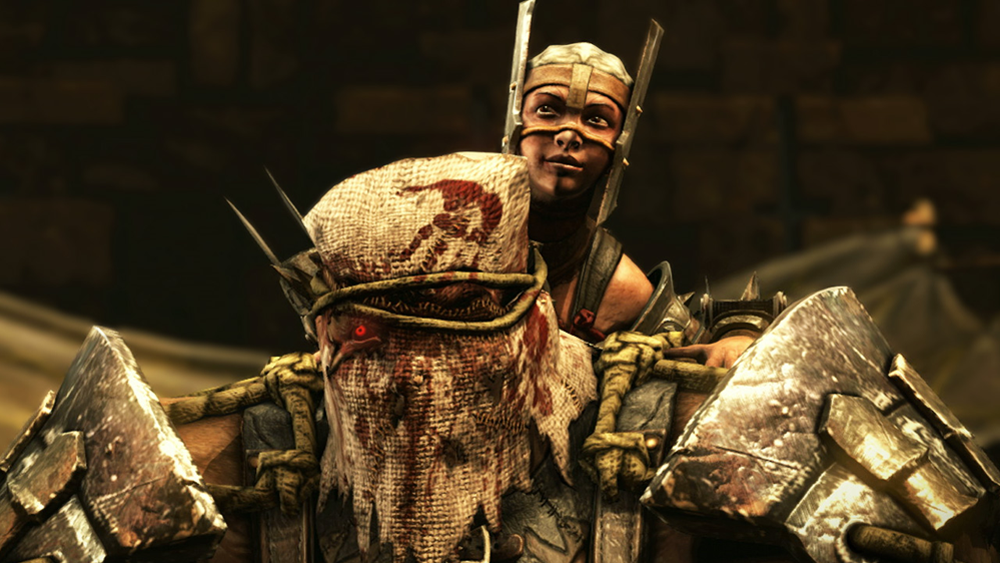 Above: I’m getting really tired of the, “Who runs Barter Town” jokes…

One aspect of the Mortal Kombat X demo that generated a lot of question and exclamation marks above my head was the character select’s style system.

Each playable character comes in three different flavors, each with their own buffs and quirks. Although certain characteristics from each fighter will remain the same, such as Scorpion’s spear special being in all three versions, there will be additional elements added to each style.

At first it sounds very similar to Capcom’s character design philosophy at the turn of the century. For example, Street Fighter Alpha 3 used the “ism” select system, which dictated both a character’s move set and what rules that fighter played under (X-ism played like Super Street Fighter II Turbo, A-ism played like Alpha 1 and 2, and V-ism featured a custom combo system).

Unlike Street Fighter Alpha 3’s take on the concept, Mortal Kombat X’s approach is to keep its hands off the base system. So choosing one style of, say, Sub-Zero, does not change how he handles blocking, dashing, or how the X-Ray/Break/EX super meter works. 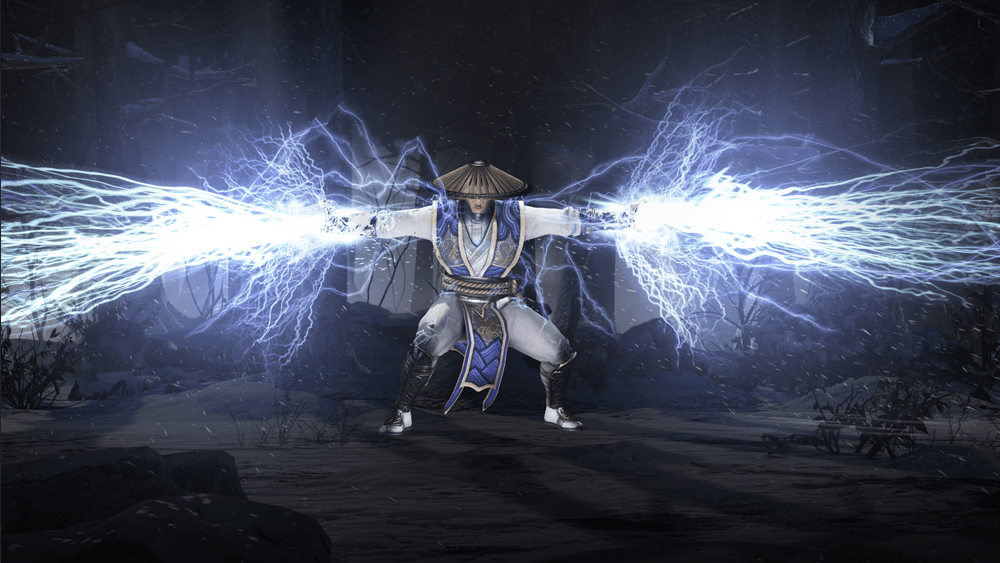 Above: Sure. Electric hands sound cool at first, until you try to hold silverware. Or use the shower. You can’t hug your newborn child with 1.21 gigawatts…

For example, while roaming around the character select screen I noticed three variations of Scorpion. Ninjutsu Scorpion gains a pair of swords that affect the nature of his normal attacks. Inferno Scorpion trades his swords for a summoner demon, which will act like an assist character. Hellfire Scorpion is given a flame projectile and the ability to self immolate.

On paper, fighting game fans can make an educated guess on what is likely going on here. I can see Ninjutsu Scorpion may perhaps ve a version of his 2011 incarnation with improved normal moves, perhaps giving him a stronger footsie game (the genre’s meta-game of using well spaced attacks to feint an opponent into doing something, then punishing them for it). Where Inferno Scorpion sounds like a potentially Marvel vs. Capcom like design. Where he could call in his demon assist to occupy one section of the stage, while Scorpion uses his own moves to toss some hitboxes into a different portion. Hellfire Scorpion is very likely meant to deal with any projectile game shortcoming the other two versions present.

While shoving the cursor around the select screen, I notice some overlapping themes amongst the various styles. Enhanced normals, screen real estate lock downs, and projectile/armor generation being the three recurring design concepts. I’d need a lot more play time with the demo, however, to confirm any of this. Above: So it says here your parents raised you to become a pit fighter where combatants tear each other apart like Kentucky Fried Chicken. And during this entire time, no one called CPS?

As I entered the herd of humanity flowing up and down the San Francisco streets, making my way back home, more questions than answers filled my thought bubble. Although I’m sure a chunk of the Mortal Kombat fan club will love the faction war concept and the enhanced towers mode, NetherRealm Studios was vague about the nature of the rewards from these modes and how/if they affect gameplay. They also seemed to focus heavily on the lone player that doesn’t necessarily want to compete directly in head-to-head.

The most major element nagging my brain, however, is the variation system added to the character select. At first glance the concept may seem simple, but NetherRealm Studios is traversing a balancing path where many others have failed (see V-ism’s domination of Street Fighter Alpha 3 for just one example). It isn’t just multiplying the balancing work by three (which is daunting enough), but it is also modifying the design genetics of characters with very specific gameplay identities.

This version select is a ballsy move, for sure. NeverRealm Studios is walking an incredibly thin line, where one side yields something beautifully complex, and the other side contains a convoluted mess. We’ll see where they land.