Moss plunks you into a fairy-tale world. Instead of cutscenes, you flip through the gilded pages of a book as a kindly narrator unravels the story for you. You play as the Reader in this enchanting virtual reality game, a being who sits on the outside of the story but can still interact with the characters within.

I’d been looking forward to Moss ever since it debuted at last year’s Electronic Entertainment Expo. I was impressed with its intuitive controls, the way the fantasy world unfolded before me like a diorama, and its adorable mouse heroine, Quill. It doesn’t disappoint. It’s developer Polyarc’s first game, and it’s a PlayStation VR exclusive that’s out today. 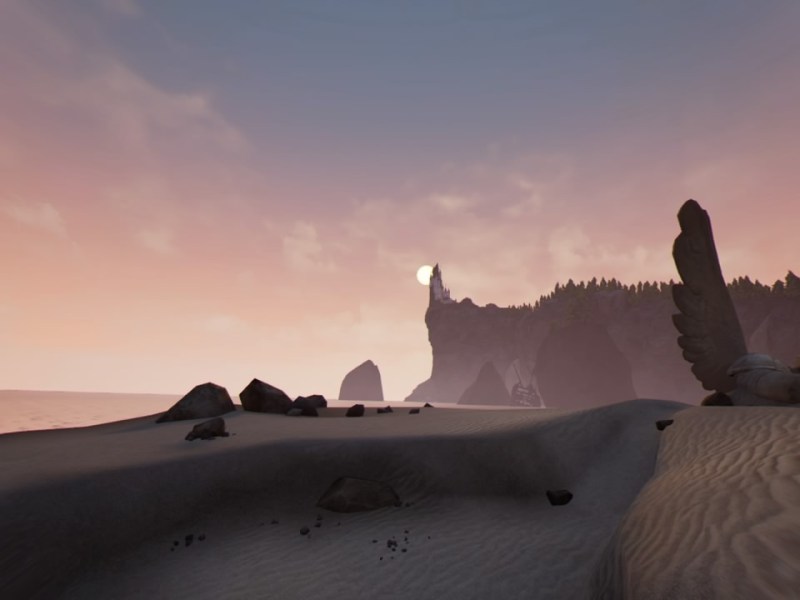 As a kid, I was obsessed with Brian Jacques’ Redwall books, so I was excited to dive into another fantasy tale starring heroic mice. Moss’s story is straightforward: The kingdom has fallen to a sinister Sarffog, a fire-breathing snake, who wants to sink its fangs into powerful glass relics under the woodland creatures’ protection. Cast out from her homeland with the rest of the animals, Quill discovers a glass relic one day and bonds with the Reader. When her uncle is captured, she must journey back to the castle and defeat Sarffog.

Moss’s world is filled with medieval and fantasy accoutrements — epic castles rising in the distance, miniature pubs for tiny creatures, magical sprites, dark dungeons with failed adventurers. The enemies, on the other hand, seem to be fused with some kind of futuristic technology, their ranks filled with robot creatures and giant laser-shooting sentries. You can also find occasional evidence of humans in the world — enormous swords stuck in the swampy Mire, broken shields, and shattered statues.

In VR, especially, it’s spectacular to behold. The looming forest impresses upon you just how small Quill is. Conversely, being inside a tiny mouse church makes you feel like you’ve shrunk down inside a dollhouse. It feels like a fully realized world with a lot of depth. In one level, you’re solving puzzles in the foreground of a temple. As you wind your way to the next level, Quill passes through the background of the previous area, making it feel like she’s actually inside a real building. 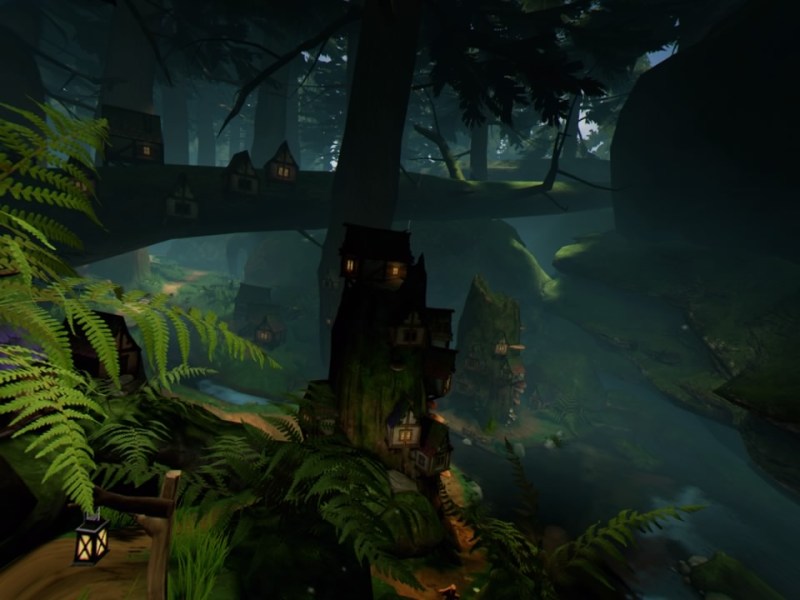 Most of the gameplay involves solving simple environmental puzzles and fighting little robot beetles. The Reader can interact with certain objects, which glow blue, and you can move them around to create platforms for Quill to jump on. Sometimes you’ll have to take control of enemies, highlighting them with your cursor and moving them places or using their abilities. When you’re not doing that, you’re moving Quill through the world, hacking at enemies and dodging out of their way.

When it gets really fun is when you have to control Quill as well as manipulate the environment at the same time. In a few instances, this is both hectic and delightful — you might be moving Quill around and jumping from ledge to ledge while maneuvering an enemy away from her so that it can explode a safe distance away, for instance.

The final boss sequence with Sarffog is also pulse-poundingly terrific. This is in part because it’s awful seeing Quill get hurt. You’re the Reader, after all, and you have to take care of your tiny woodland hero so she can see her story through.

Some may wince at shelling out $30 for a game that lasts four maybe five hours. I didn’t mind Moss’s price. It’s unique, and its cost is comparable to, say, two movie tickets for a total of three to four hours of entertainment. To me, that justifies the price, but I can understand how others may find it too steep.

One thing to consider as well is that Moss doesn’t offer a lot of replay value. I could see going back and finding all the collectibles I missed, but it’s a linear game. It’s also possibly one of many in a series. Polyarc has teased that this is only Book 1 in Quill’s adventure, and if the studio is planning additional chapters, it hasn’t said whether or not players will have to pay for them separately.

Moss is my favorite VR experience so far. This is partly due to the fact that it’s extremely gentle. Because it doesn’t task you with moving through the environment, it’s an accessible VR game for people who are prone to getting motion sick. The world’s beauty is also a draw.

Moss’s vistas often wowed me, especially when I found myself in a small space like Quill’s home or a cave. Everything has a painterly aesthetic to it, lit up by shafts of sunlight and glowing magical firelight. I also loved the clever storybook framework. Even when you’re reading the book about Moss, the game transports you to a grandiose chapel-like structure that feels out of this world.

And of course, this VR fairy tale’s focus is on Quill and your relationship with her. I enjoyed interacting with her, and loved the way she communicated with gestures and sign language. She’s fleet-footed, brave, and so very tiny — which made it all the more satisfying to accompany her on her adventure to defeat evils so much larger than her.

Moss launches on February 27 for PlayStation VR. The publisher sent us a digital code for the purposes of this review.