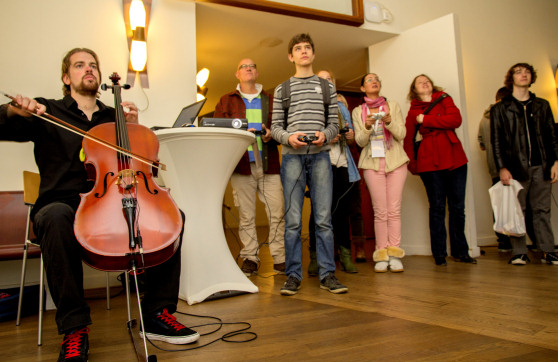 Imagine a video game where you’re fighting in tanks to destroy as many cannons as possible. Now figure in a talented cello player as the cannon master, and you might just lose to the awesome power of classical music.

Developer Joost van Dongen is introducing a new game called Cello Fortress, a twin-stick shooter where four players challenge one musician in a battle of “instruments”: four regular Xbox controllers versus one cello. It’s currently in beta, with rough prototype graphics tossed in, and van Dongen has been touring his creation at live events in the Netherlands.

You’re not going to see this for sale anytime soon — Cello Fortress requires an experienced cellist and a real instrument, not the plastic guitars you bought for other music games like Guitar Hero. And Cello Fortress isn’t as much about hitting the right notes as it is controlling the cannons and other artillery through improvisation. Playing fast notes fires the guns, or low notes activate mines and so on.

It’s an experimental concept, but that’s not anything new to van Dongen. In 2011, he created the indie racer Proun, which has appeared on display in European museums alongside traditional works of art, like those of Pablo Picasso.

“Cello Fortress is a really weird and unique game,” van Dongen in a statement today. “But for me, it makes a lot of sense: playing cello has been a hobby of mine for ages, and I am a professional game developer. I like to make weird, unique things. How could these ingredients not combine into a game?”

Van Dongen has been a hobby cellist for 20 years. His is also the lead programmer and cofounder of Ronimo Games, the Dutch developer that most recently made the 2D multiplayer online battle arena (MOBA) game Awesomenauts.

You can watch Cello Fortress in action below.