A gaming laptop didn’t make a lot of sense around this time last year. But thanks to some major breakthroughs from graphics chip maker Nvidia, they are a lot more reasonable.

The MSI GS43VR Phantom Pro gaming laptop is a compact powerhouse that is light enough to use as a daily driver and capable enough to push the polygons in a VR headset. It’s out now for $1,500, which also makes it competitively priced alongside other workstations. But what’s most incredible here is that this 14-inch, 4-pound notebook runs games as well as the 17-inch, 8-pound MSI GT72S portable desktop that sold for twice as much in 2015. That’s a tectonic shift in performance.

Squeezing those graphical chops into a smaller package is possible because of Nvidia’s Pascal architecture. MSI is upgrading its entire lineup of gaming laptops to incorporate the latest graphics cards running on that 14nm chip process, and the results clearly show that it’s time to give gaming laptops another look.

We’ve reached an interesting point when it comes to computer graphics. Video cards are at a level where nearly any mid-range chip can handle nearly any new release at 1080p and 60 frames per second without sacrifices. What’s incredible is that now we have in a laptop.

MSI’s GS43VR is nowhere near its top-of-the-line rig. And yet, you can throw just about any game at it and come away with the rock-solid performance that you want. If you’re looking a PC that can do all of your work, fit in your bag, and still blow away a PlayStation 4, this is it.

Now, it’s not always locked at 60 FPS in all situations. You may need to tune down the shadows in The Witcher 3, and The Division has its rough spots as well. But in my tests to see if MSI GS43VR is a capable 1080p60 laptop, I came away impressed.

Check out the results of my benchmarking below. All of these games were running on Ultra and 1080p: 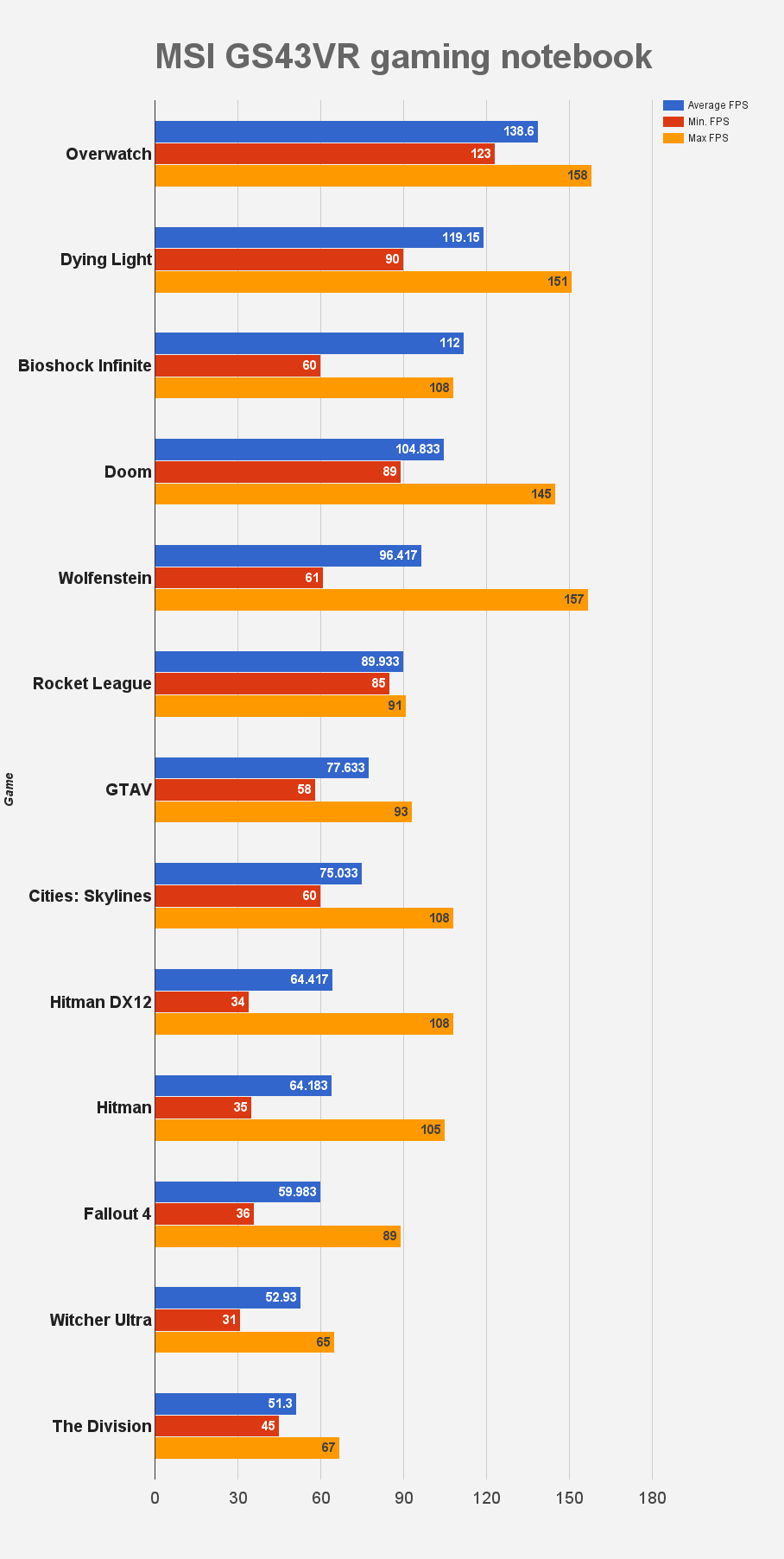 In addition to the power, the MSI GS43VR is tiny for a gaming laptop. It’s less than an inch thick. It weighs only 4 pounds. It is easy to manipulate with one hand. I’m just so amazed that this tiny notebook packs so enough processing muscle to take my entire gaming library.

On top of the size, it has a confident style that would look at home in an office or at a LAN party. The chassis uses aluminum that MSI cut into clean shapes. Nothing is bulky. Instead, the GS43VR looks more like a sports car. The red accents of the keyboard backlighting and around the trim of the power button and trackpad still give it a flash feel as does its sharp-angled tapering along the backside of the display. 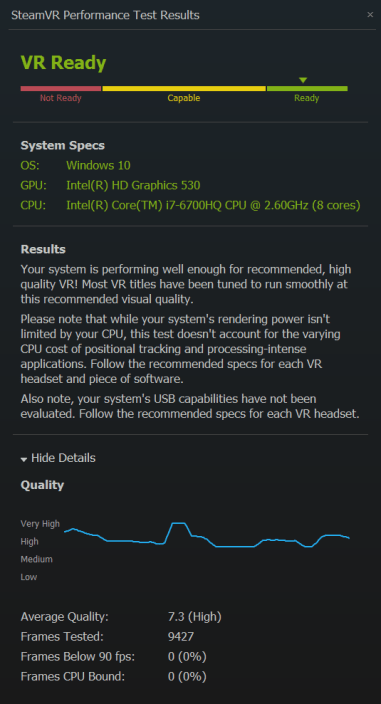 This sleek, powerful rig isn’t just for playing games on its 14-inch screen. The 1060 at its core is powerful enough to power the HTC Vive or Oculus Rift VR headsets.

I ran the system through a serious of VR games, and it was able to handle every one without an issue. I played online multiplayer in Rec Room and built furniture in Home Improvisation on the Vive. On the Oculus Rift, I dug into Gang Beasts and Minecraft: Windows 10 Edition. Everything ran well. For VR, that means a steady 90 frames per second with no hitching or dropped frames.

I ran Steam’s VR Performance tool, which you can find on the right. Note that the test misidentified the card as an integrated Intel chip, but the rest of the results are accurate.

In addition to the performance, the GS43VR works fine as a VR machine thanks to its design. One HDMI port sits next to a USB 3.0 input on its right side. On the left, it has another USB port. This is enough for the Vive. You may, however, encounter troubles if you want to also plug in a controller to use with the Oculus Rift. You’ll either need a Bluetooth-enabled gamepad or a USB-splitter.

Like other MSI laptops, this one comes with an integrated SteelSeries gaming keyboard. It’s solid with plenty of travel thanks to concave design that enables the keys to sit up higher than a lot of other notebooks of this size. The touchpad is also nice. Unlike a lot of other Windows machines, it didn’t struggle with multitouch gestures, and I didn’t have to fiddle with the settings or divers to get it working. I consider that something of a miracle.

And then the GS43VR works great for communications. It has a decent Bison camera built-in and a clear-sounding microphone that works for meetings, multiplayer gaming, and personal calls. A lot of companies cut corners with these components, but that’s not the case here.

Hot and loud under load

Because of the MSI’s compact dsign and intense graphics capabilities, I was expecting it to get hot enough to burn off my fingerprints and loud enough to scare my cat. Turns out I’m clairvoyant, because it does both. Now, it only really gets scalding above the keyboard well, and it remains comfortable in all the areas where you typically rest your wrist meat and fingers. So the heat isn’t a major issue, but it’s one that you’ll have to keep in mind.

The sound, however, can get pretty intense when the fans are maxed out for virtual reality or a graphically intense game like Witcher 3. You have a lot of control over the fans thanks to MSI’s built-in software, and that means you can set it to only get noisy when it’s necessary. In typical use outside of gaming, it often doesn’t make a peep. 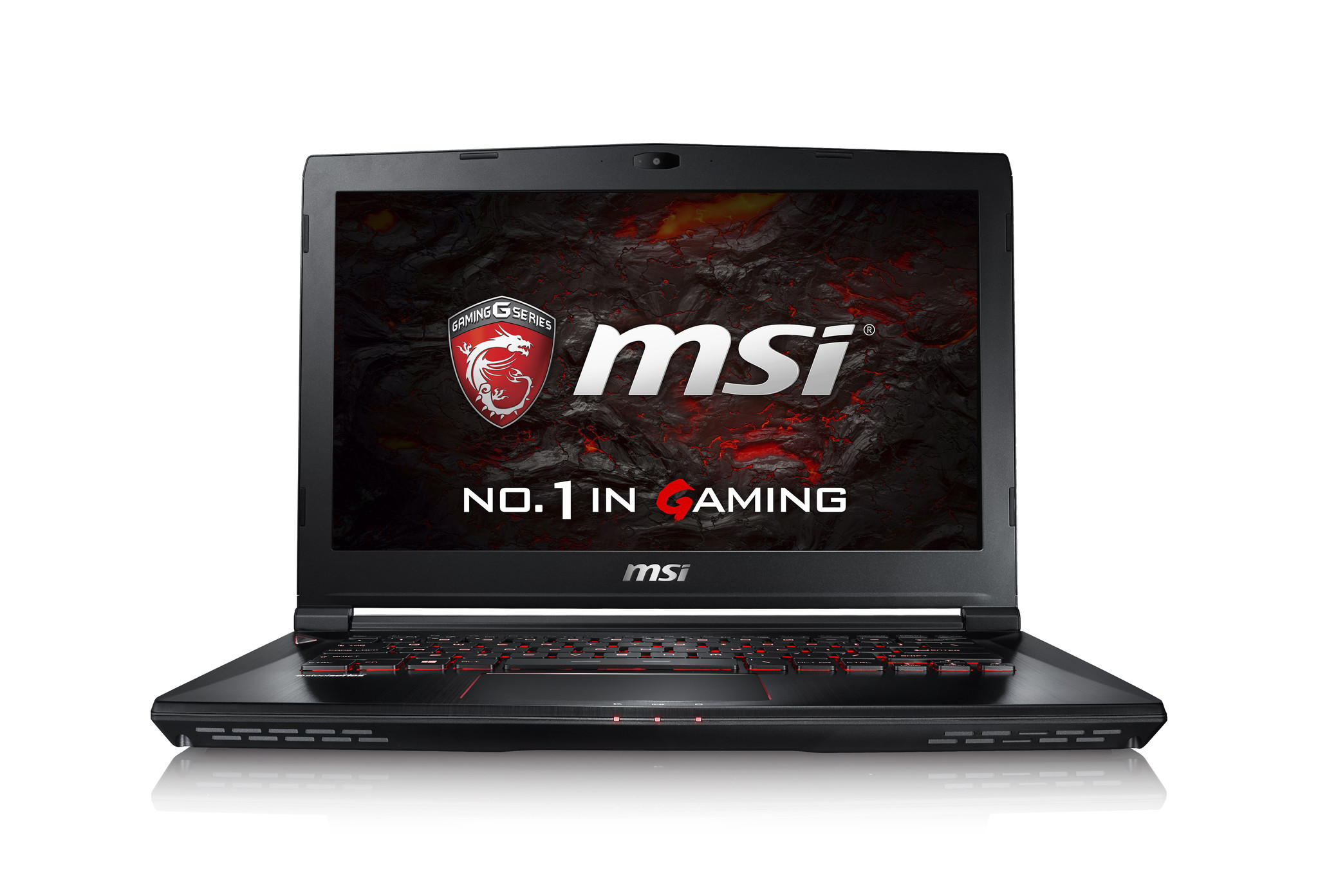 Nvidia was talking up its shift to a 14nm process in its Pascal chip architecture for a while, and since it’s difficult to tell marketing hype apart from actual leaps forward, I didn’t really let myself get excited. But the MSI GS43VR is proof that we are living through an incredible time for mobility in computing. This machine is lightweight, packed with features, and capable of running almost any game on max settings along with the major VR headsets on the market. Comparing this to its power-equivalent 8-pound, 17-inch, $2,500 cousin from 2015 is jaw-dropping.

MSI also deserves credit for nailing this opportunity to build a smaller, sleeker machine that looks incredible and uses high-quality components while also coming in at the competitive price point. Last year, I don’t think I would’ve recommended a gaming laptop to anyone, but this product has made me reconsider that position. I now think the MSI is a viable option for anyone looking to spend around $1,500 on a new computer.

MSI loaned the GS43VR to GamesBeat for the purposes of this review. The notebook is out now for $1,500.