Gamers have had a lot to complain about when it comes to the scaled-down graphics processors companies like AMD and Nvidia cram into laptops. That’s why MSI and Nvidia teamed up to fit a full desktop GPU into an oversized notebook — and the result is a spectacular gaming rig.

MSI’s GT72S Dominator Pro G Dragon is a honking 17-inch on-the-go desktop that features the GeForce GTX 980 desktop video card and an Intel Core i7 CPU. It also comes with a 32GB of DDR4 memory, a SteelSeries keyboard, and the option of a G-Sync monitor. That’s a ton of power, and it only weighs 8.4 lbs.

Now, I’m late to reviewing this machine, but I’ve had a lot of time to consider what it can do and who it is for. And as MSI likely begins prepping a new generation of ultra-powerful laptops, I’ve found myself more and more attracted to this rig and what it can do — especially for virtual reality.

One of the reasons I was so interested in trying out the Dragon is because I wanted to see a laptop with a desktop GPU could do with the Oculus Rift and HTC Vive. What I didn’t expect was that this would turn into my primary VR workhorse.

The thing about VR — especially the room-scale motion tracking that the HTC Vive does — is that it’s a pain to set up. I have the sensors for the Vive screwed into my walls in my living room, but my Windows gaming station is in my office upstairs. Having the Dragon around means that I don’t need to lug all the components and cables for my desktop out of the office if I want to hop into VR. Instead, I can just boot up the MSI laptop and get right into the action.

At the same time, it’s easier to throw my Vive and the Dragon laptop into my car and drive it over to a friend’s place than if my desktop were the only option.

Unbelieveable desktop performance for a laptop

MSI really did pack in everything into the Dominator Pro G Dragon, and that means you have the power of a near top-of-the-line gaming desktop in a case design that — while no MacBook Air — will fit in a bag.

The 980 is a well-regarded beast, and you are getting a configuration here that has 8GB of video memory. On top of that, the Skylake CPU is ready for overclocking for those of you who want to tinker. When I started throwing games at it, I was seeing results that’s far beyond what any other laptop is capable of. 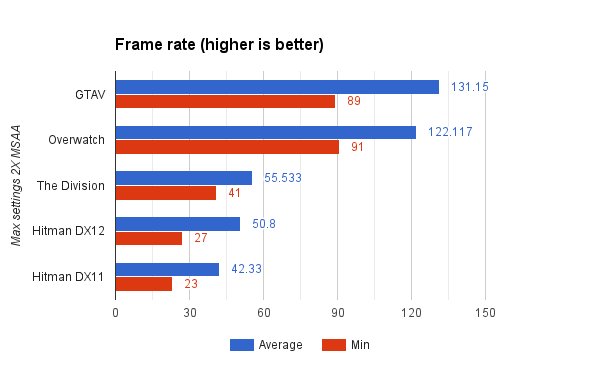 Above: MSI handles most games with no problems. I was able to get The Division and other games running over 60 by lowering shadow quality and a few other tweaks.

What’s nice is that despite all this performance, the system runs relatively cool and quiet. I wouldn’t call the design sleek, but it pushes a ton of air through the system to keep everything running without issue. When you do start to put extra load on the GPU, a button on the left instantly enables you to power up the fans to 100 percent.

Its keyboard is great

The SteelSeries keyboard is a nice addition to the Dragon. It’s not mechanical, but it is still a responsive and sturdy gaming keyboard. The buttons feel great, and small touches like the nipple on the W key — to help gamers easily find their WASD center — is really appreciated.

I also enjoy the SteelSeries lighting effects, even if these aren’t as impressive as Razer or some other hardware manufacturers.

G-Sync is an Nvidia display technology that uses a number of tricks to give you a smooth framerate in games even when your computer can’t keep up with rendering frames. The Dominator Dragon comes with one of these panels.

While most games will always run at 60 frames per second on the notebook, G-Sync will step in to maintain that consistency if the system ever does falter. And having the option to play games at 75 frames per second is a nice bonus.

When it comes to audio, MSI’s speakers sound rich and full. They have no trouble re-creating high notes while also delivering something that approaches a rumbling bass.

The Dragon is a beast, and taming a monster like this requires more than $3,000. That’s a big number. You can build an equivalent desktop with keyboard, monitor, speakers, and a mouse for several hundred dollars less.

When I first started using the Dragon, I hated it because of the trackpad. But after fiddling with the settings and drivers, I was able to turn it into something that works well for me. When I update Windows, it sometimes resets the trackpad to its factory defaults, and this makes me want to set my head on fire.

It’s a fine trackpad, but I hate that I have to babysit it.

The power port on the back of the Dragon does not hold cable that well. Jostling the laptop or using it on your lap can often lead to the power cord coming loose. This is especially annoying when you’re in the middle of an online match and see your PC start to wig out and drop from 75 frames per second to 15 because the GPU underclocks itself to save battery power.

Despite the price, I think that the Dragon justifies gaming laptops. Portable PC-based VR is amazing, and having desktop power in a smaller, self-contained package is crucial. Now, that’s not going to matter to you if you do all of your gaming at home and don’t care about VR, but everyone else should keep an open mind about this laptop in particular.

The MSI GT72s Dominator Pro-G Dragon-004 is available now for $3,100. MSI loaned GamesBeat the laptop for the purposes of this review.