Wearable computers is a technology category that’s supposed to take off because of smartwatches and digital visors, but I want something more than a visor.

Hardware manufacturer MSI has my back … pack. 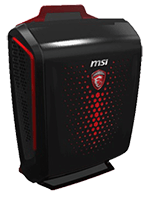 Above: The Backpack PC from MSI can work as a desktop, but the company built it for you to wear.

The Backpack PC is one of the newest products for virtual reality that MSI, which specializes in gaming desktops and laptops, plans to show off at the Computex trade show in Taiwan next week. Today, if you want to use a high-end head-mounted VR display like the Oculus Rift or HTC Vive, you need to have a cord running from desktop PC. With MSI’s Backpack, you can power the displays by strapping a desktop to your body. Your feet will no longer end up tangled in cords you can’t see. SuperData Research predicts VR could generate $40 billion in spending by 2020, but that doesn’t include the hardware people will purchase to ensure they can use their Rifts and Vives.

MSI hasn’t shared the price of the Backpack PC yet, but it did reveal that some of the specs. When you enter the Metaverse using the company’s wearable desktop, you’ll do so with an Intel Core i7 and an Nvidia GTX 980 graphics processor.

In a press release, MSI notes that this backpack is to give VR voyagers more freedom of movement without having to worry about unplugging a cord. Now, all of this doesn’t mean you can go to a park and walk around a giant virtual space the size of a football field. The Rift still only has a small tracking space in front of its camera. The maximum room size for the HTC Vive, which has two tracking towers, is about a 15-by-15-foot space.

MSI also isn’t the first company to introduce a backpack solution for VR. Aorus, a laptop manufacturer, introduced a holster for its X7 DT gaming laptop that enables players to strap it to their back. The difference for MSI is that its PC isn’t a laptop. The company designed the Backpack specifically as something you wear.