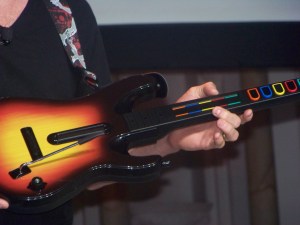 Music has overtaken sports as the No. 2 category for video games and has led to the highest adoption of video game consoles in years.

The results from market researcher Odyssey offer proof that the video game industry is expanding its audience and that game consoles are reaching a greater part of U.S. households.

Music simulations such as Guitar Hero and Rock Band have driven an explosion of growth in the category, said Nick Donatiello, president and chief executive of Odyssey in San Francisco. His firm has been tracking the ownership and usage of home media products on a quarterly basis since 1994.

The research puts into context the trends that we’ve all noticed in games (see our story on the triumph of music games at the E3 trade show in July). Rock Band 2, where you can jam at home with multiple instruments, debuted at No. 3 on the list of top U.S. games in September, according to market researcher NPD Group. Odyssey said that 58 percent of players played music games, second only to 65 percent who played action games. About 50 percent played sports games, down from 55 percent in 2007 and 62 percent in 2005. (That’s not good news for Electronic Arts, which dominates the sports game market with its EA Sports titles. Then again, EA publishes Rock Band and Rock Band 2).

I can see the trend in my own home, where we were playing Wii Music for the Nintendo Wii console over the weekend. My three kids, including our five-year old, were playing the game for a couple of hours over the weekend. In contrast to Rock Band and Guitar Hero, Wii Music doesn’t have any faux instruments. You just use the Wii remote control (and its accessory Nunchuk device) to act as if you’re playing instruments such as the saxophone. The game is forgiving, allowing the kids to play without concern that their music will be judged. They were playing “Do Re Mi” with guitars and I tried “Daydream Believer” with a saxophone. As you play, you can hear the results coming from your TV and see your “Mii” avatar characters act out your motions on screen. After you finish playing, you can make a video out of your performance and then create an album cover.

The game isn’t intimidating and is fun for first-time gamers. (Downside: The song selection is limited, and so is the multiplayer play, at first). And yet it’s also tough to make music that sounds good. And there are more than 60 different instruments to experiment with, including instruments that make silly dog and cat noises. Disney also has a music game, “Ultimate Band,” for the fall, as well as upcoming “High School Musical 3” games.

It’s games like these that are expanding the audience for video games. The majority of music game players are female. Odyssey noted that about 40 percent of households now have a video game console, the highest number since 2002. The company began tracking the category in 1995. Since that time, console ownership has fluctuated between 32 and 40 percent. The company surveys more than 1,500 consumers.