Editor’s note: The relationship between religion and gaming is a difficult topic…but it’s an important one. I’m an atheist, and that belief is more than significant to me — and this is why I chose this post. Mike is a Christian, and I have the utmost respect for his even-handed approach to such a touchy subject, his bravery for talking about it, and his faith. I don’t think I would have ever had the courage to write such an article. And at the end of the day, some video games can challenge anyone’s sensibilities — even an atheist’s. – James

Gamers and religious organizations are frequently at odds with one another. Members of the latter group are often some of the most dogged critics of the content of video games and other entertainment media. And since the United States is predominantly Christian, it follows that Christians are generally the most vocal about their concerns.

A recent post by Game Politics reported on a protest by a group from Maine on Call of Duty: Modern Warfare 2’s “No Russian” sequence. A year ago, Christian watchdog outfit The Timothy Plan published an audit of ’07 and ’08’s major releases for sexual content, gay and lesbian content, violence, and criminal vice. The balance between religion and gaming remains tense elsewhere. In 2007, BBC News reported that The Church of England had threatened to sue Sony for their inclusion of the Manchester Cathedral in Resistance: Fall of Man.

As a gamer, I find myself defending my hobby pretty often. People question how I spend my disposable income and argue with me about video games’ station as art. It’s strange to think that I might have to uphold myself religiously, too.

I’ve been reticent to write about religion in my articles, but with all the negativity surrounding the issue these days, I feel the topic is something worth discussing. For those who haven’t read my previous posts, in my write-ups, I always try to pose a question. So, I ask, can you be religious and be a gamer at the same time? 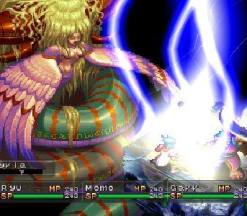 You could easily answer yes to this question. But the more I think on it, the more difficult the question becomes. From a Judeo-Christian standpoint, gamers are breaking the Ten Commandments in games all of the time. When I was younger, I remember my father’s slight discomfort when I told him that the point of Breath of Fire 3 is to meet a goddess (God) named Myria and confront her (Him) about her (His) transgressions against the world. The game even lets you decide whether or not to destroy the being.

My argument is that games, like any art, are a means of authorial expression and participant reaction. In a game, a person can safely dabble in behavior or thoughts that they may not necessarily agree with.

Take Grand Theft Auto 4: I frequently hear gamers discuss how they do not empathize with the main character, Nico, because he has few redeeming qualities. They don’t agree with his choices in the game, but as they play, they glean an understanding outside of their moral code, whether or not they realize it. Their revulsion is indicative of this.

As a gamer and a religious person, I believe that virtual worlds with unfixed consequences are a safe way to learn about your own beliefs and values. I remain unconvinced that playing a video game where you can wrestle with your own personal sense of right and wrong is a bad thing. In addition, the ESRB monitors and gives content guidelines for games with objectionable content, much like the Motion Picture Association of America does for cinema.

So, which is it? Is gaming a hobby that people of all faiths can enjoy? Or is it something that the faithful should stay away from?

I would be especially interested to see how members of other religions view controversial gaming content and whether or not other faiths seek to limit such material so actively. 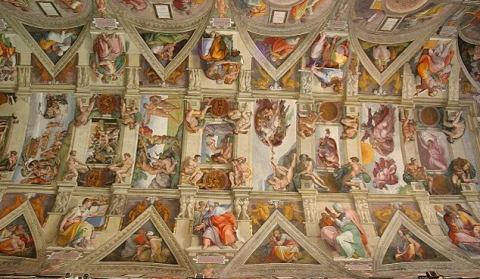 In the end, keep in mind one thing: Pope Julius II’s visionary demonstration of artistic patronage, The Sistine Chapel, was controversial when Michelangelo completed it because of its depictions of nude saints.

As a side note, please, be aware that my intention with this article is to neither demean or attack anybody for their personal values or religious beliefs nor to inveigh against any specific religious institution itself. I feel comfortable posting this on Bitmob in an effort to provoke a discussion where we can share our thoughts and avoid the invectives present on most other sites and message boards.