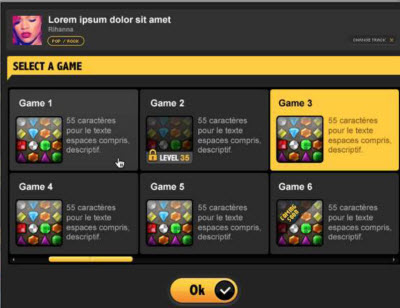 About half of Facebook’s top fan pages are related to music. And games are huge on the social network. So it was only a matter of time before someone attacked the opportunity for social music games on Facebook.

That’s what Paris-based MXP4 is doing with the beta launch today of Bopler Games, a new music hub on Facebook with multiple apps. The app allows users to create an original social music gaming experience by picking the songs that play in their favorite arcade-like games on Facebook. Music games are a treacherous market these days, but this genre is one of the few that big rivals such as Zynga haven’t nailed yet. If it succeeds, then MXP4 may establish a new genre of gaming on Facebook.

MXP4 hopes to succeed by providing artists with a way to make money by more closely engaging with fans. It hopes to improve the viral distribution of music and encourage song sales. The means to do that is via a free-to-play game experience, where users can start playing for free but can pay real money for a better experience.

Bopler Games lets players combine a game of their choice and a favorite song from a large catalog of licensed music. The company has negotiated agreements with four of eight major music publishers and labels. Players can challenge friends in matches and send music gaming gifts to their friends on Facebook. 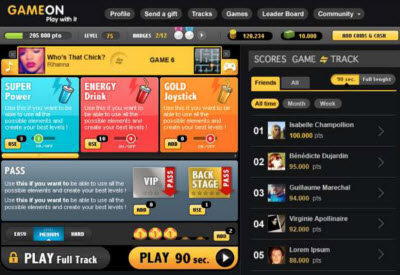 The hub is launching with four music games. The company previously launched its Pump It! music game in March and now has more than 1.3 million monthly active users, making it the No. 1 music game on Facebook. Pump It! was created for the labels under a business-to-business strategy. But MXP4 is going direct to consumers with its Bopler Games hub.

The app is now embedded on artist fan pages with more than 65 million followers on Facebook. Bopler is also launching Space it!, Match it! and Snake it! Each of those apps is accessible via the Bopler hub.

The core music game uses a patent-pending technology dubbed Automated Level Design. Albin Serviant, a former Vivendi Mobile executive and chief executive of MXP4, said in an interview that the technology automatically analyzes a song and extracts data based on its rhythm, melody and song structure. It then enables the song to be played within any Bopler game and makes it easy for others to build games around the songs. Six additional games are currently in production for Bopler Games. By June, Serviant expects Bopler Games to have 12 games available. 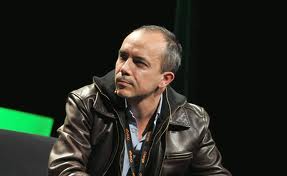 Fans can play 60-second clips of songs within Bopler up to three times per day for free. To play a full track and enhance the game experience, fans can purchase a “music pass” as well as game boosters using “music cash,” an in-game currency that can be purchased with Facebook Credits (the social network’s virtual currency, which can be purchased with real money). Fans can also earn “music coins,” which are redeemable for passes. The fans earn the coins by playing and sharing games. Each time users purchase a music pass, artists, writers and labels receive royalties.

“We’re uniting two of the most popular categories on Facebook – games and music,” said Serviant (pictured). 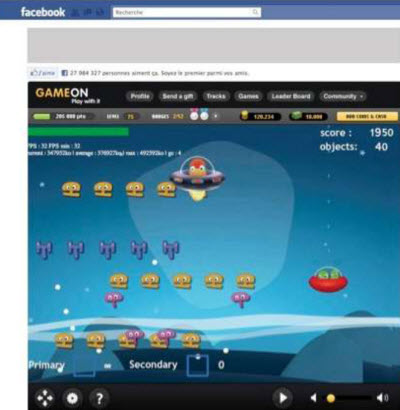 The strategy might work because music pages have been some of the most-visited and “liked” by Facebook users. But they have not shown nearly the same monetization potential as games on the site. Bopler Games could help change that, Serviant said.

The company says that the artists using Pump It! on their sites have seen a 30 percent sharing rate and 12 minutes of time spent per session of game play.

The company has raised more than $13 million to date. Backers include Orkos Capital, Sofinnova Partners and Ventech. MXP4 was founded in 2007 and has 15 employees. Rivals include Disney’s Tapulous on mobile phones.