I finally finished Guerrilla Games’ big hit Horizon Zero Dawn on the Sony PlayStation 4. But “finished” is a relative term. While I completed the main campaign of the single-player game, I am only 32 percent done with the content, according to the game’s stats.

It’s a vast game, where you play as female warrior Aloy, trying to unearth the mysteries about why mechanical dinosaurs are roaming the planet and humans are almost extinct. Much of the time, Aloy has to slink about and run from giant beasts. But my favorite battle was one where I didn’t have to run.

It takes place near the end of the campaign (spoiler alert), where the city of Meridian is under siege. The mechanical monsters are marching on the majestic city, and a small human force with a handful of guns opposes them. Aloy gets her hands on one of these, and it’s like a handheld artillery weapon. You squeeze the trigger and it loads six shots, and then you let it go and let the shots arc into the targets. It can take out the smaller machines with one shot, but the bigger ones require multiple hits.

I enjoyed it because I didn’t have to slink around so much and try to avoid head-on fighting with the larger machines. The hand-to-hand combat is quite satisfying in Horizon Zero Dawn, but it wore me down. With the artillery gun in my hands, I was able dominate the dinosaurs. They came running at me, but I was able to take them down with the gun. They came on relentlessly, though I got one respite where I could run around and collect healing plants. 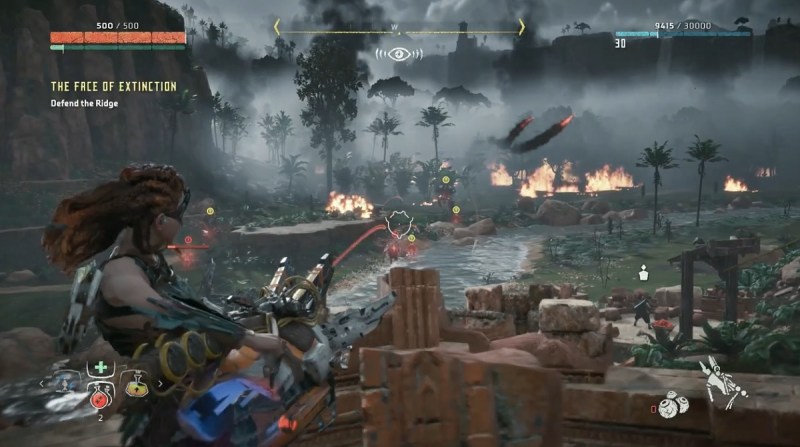 Above: Aloy is almost done fending off the besieging machines in Horizon Zero Dawn.

The video below captures the second part of the battle, all the way up to the point where a giant bird comes at me. This boss is almost indestructible, and it is hard to hit because it flies directly over your head.

Having just finished the full campaign, I have to say this is one of my favorite games of the year. It is right up there with Nintendo’s The Legend of Zelda: Breath of the Wild, which I will eventually get back to playing. Horizon Zero Dawn has a huge open world, and I wouldn’t mind going back to finish the full world some day when I have more time.

Check out the video below, where I unsuccessfully tried to defend the city. I eventually beat it later.