Gamers spend a lot their time online and communicate often with friends. That’s why everybody wants to rope them into a social network. But gamers have proven to be an elusive and fragmented bunch of tribes. Whoever succeeds at creating a universal social network for gamers will have it made. 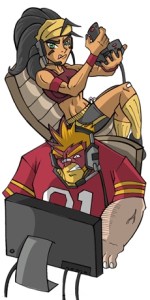 MyGameMug of New York is the latest to try. It joins the likes of Xfire, Raptr, GamerDNA, UGame, WePlayThis, and GameStrata. Microsoft has its Xbox Live online game service for the Xbox 360. Sony runs the PlayStation Network. Nintendo has its Miis. Even Disney has Dgamer. Sean Fanning recently sold Rupture to Electronic Arts for $15 million. MyGameMug has some catching-up to do, but at least it’s going at the problem from the perspective of gamers.

The tribes of gamers are very scattered. While Windows Live members can communicate with Xbox Live members, very few cross-platform games have been launched. MyGameMug seeks to solve what it calls a “broken system” of online gaming experiences by matching gamers with compatible partners. (It says surveys show 75 percent of gamers are dissatisfied with the multiplayer gaming experience today.) And the company is trying to unify gamers across all of the platforms. It has community management tools to coordinate events and schedules.

When I signed up for the service, I answered a bunch of questions about my own personal gaming tastes. Based on how I answered the questions, it classified me into one of 16 gamer types. To my surprise, it categorized me as a “cyberathlete” who would not hesitate to play games professionally.

That’s actually pretty far off the mark. I’m not quite skillful enough for pro gaming. But Ray Lau, cofounder of MyGameMug, said that the accuracy will improve as I add more data, such as my favorite games, to my profile. He said that the gamer types will become more sophisticated over time and the company will eventually let gamers create their own custom questions. 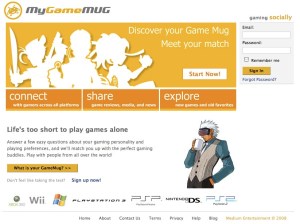 It left out some critical questions, in my opinion, such as what sort of games I like to play. It also could have asked me for my top 10 games of all time. It didn’t. That makes its results highly suspicious. We’ve all seen how good a job services such as Netflix or Amazon.com do at algorithmically making recommendations that are personalized to our tastes.

MyGameMug is the brainchild of a couple of young college grads. Lau and his college buddy Erik Yao. The two men, now 25, were both fans of games such as “Warcraft III,” but they hated playing against immature gamers on the web. They say that existing matchmaking services on both the PC and consoles only match gamers together based on skills. As you play other players, you develop a reputation and can offer reviews of others, including comments on level of maturity. (i.e., do they trash talk?).

“We feel online gaming is not just about ‘skills vs. skills’ anymore, but also about personal connection, so we are set out to complete the other half of the equation,” Lau said.

Lau said that the mistake most other gamer networks make is that they try to build something like Facebook for gamers. He said gamers don’t want that. They just want the ability to play with compatible players who are interested in the same games and have similar skills.

MyGameMug contends there are 10 important personality traits that online gamers look for. The company launched its beta site a week ago, and it now has more than 12,000 unique visitors. The company plans to license its technology to game developers who want to create game matchmaking services. It will also use the gamer data it has collected to steer targeted in-game ads to the gamers.

Seed funding came from LaunchBox Digital. MyGameMug will officially launch at the LaunchBox event today in Reston, Virg. It has plans to expand from a single web site to widgets and also start doing events and reward programs for gamers. Here’s a link to a video that describes the company.

The company has just two employees now. It plans to raise money in the future and add more features over time, such as the ability to put gamers into a match the way that services such as Xfire already do. Lau acknowledged that Microsoft needs MyGameMug to prove itself — not to mention explicit permission from gamers — before it shares any gamer achievement data.