The alliance is a combination of powerhouses that says a lot about how mobile gaming is changing. Mobile game fans, just like console and PC gamers, are gravitating to well-known game brands, and you can find plenty of evidence of that in the top ranks of the $36 billion mobile game industry. Branded titles such as Pokémon Go, Marvel Contest of Champions, and Madden NFL Mobile have been doing well in the charts. Nintendo’s Super Mario Run will debut soon, and in such an environment, it’s tough for original games to stand out. Yet free-to-play games such as MZ’s titles have held their own.

Meanwhile, Square Enix hasn’t really had a big international hit when it comes to mobile Final Fantasy games. That’s likely one reason that Square Enix is partnering with MZ, which has had a consistent top-five grossing game in Game of War: Fire Age for the past three years and another huge hit with Mobile Strike. Right now, Mobile Strike is No. 2 on iOS in the U.S. while Game of War is No. 4. Meanwhile, Final Fantasy Brave Exvius is No. 46, according to market researcher App Annie.

That’s why the alliance isn’t surprising, as both companies can benefit from working together. Palo Alto, Calif.-based MZ has grown to more than 900 employees, thanks to the success of Game of War and Mobile Strike. The company is also growing its real-time communications infrastructure technology, RTplatform, which is being used to run New Zealand’s transportation system. The launch date and title of the mobile Final Fantasy MMO aren’t being revealed yet, but the title will surely benefit from the excitement around Final Fantasy XV, the action role-playing game debuting on November 29 for PlayStation 4 and the Xbox One. 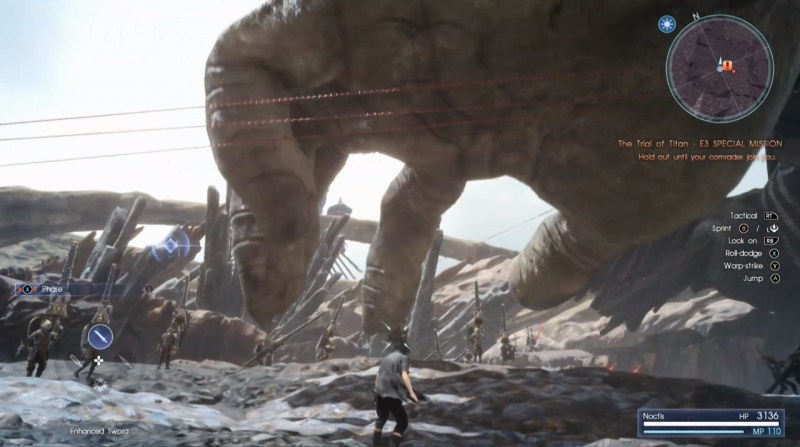 “It is an honor to work on a franchise I have loved since I was a kid. Final Fantasy is an iconic franchise in gaming,” said MZ founder and CEO Gabe Leydon, in a statement. “Bringing Final Fantasy XV to the mobile MMO gaming world is a significant opportunity for our players and we are proud to partner with Square Enix.”

The new game, which will be developed by a new MZ game studio, will combine the characters, storyline and soundtrack from Final Fantasy XV with Machine Zone’s technology, which allows millions of people around the world to play together in a single universe in real time. The game will follow the successful MZ MMO titles Game of War – Fire Age and Mobile Strike, both of which have been top ranked in the iOS and Android app stores.

Part of the reason that MZ’s titles have been so successful is that they are built on the real-time infrastructure, which can handle millions of communications per second. MZ’s titles are also built to run on just about any smartphone around the globe, and a translation engine makes it possible for players in different regions to play in the same virtual space.

“Machine Zone has a stellar track record in the mobile gaming space and we are putting Final Fantasy XV in trustworthy hands,” said Yosuke Matsuda, Square Enix president and representative director, in a statement. “We are very excited to work with the MZ team to bring together two leaders in the gaming world and look forward to Final Fantasy XV on MZ’s amazing gaming platform. We’ll work together to create MZ’s next great global mobile MMO game.”