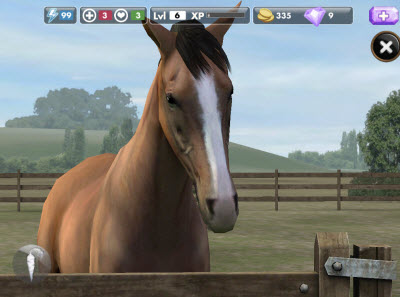 Game developer NaturalMotion is launching a realistic horse simulation game called My Horse in the next day or so on Apple’s App Store. The game looks like one of the most sophisticated to date in terms of the quality of its graphics for the iPhone, iPad, and iPod Touch.

The title, which was developed by external developer MunkyFun in San Francisco, will be a test as to whether it’s a good idea to create console-quality graphics for an iPhone audience, which may or may not appreciate the beautifully animated, realistic-looking horses with physically accurate and non-repetitive movements. In the game, you take care of a unique horse, groom it, ride it, and enter it into competitions.

NaturalMotion is betting that gamers will go for it in a big way. Torsten Reil, chief executive of the Oxford, England-based company, said that some gamers in the limited beta test were willing to spend $150 to $300 on virtual goods such as decorations for the animal. That’s a pretty astounding number, and it’s very likely that only a small percentage of users will pay such money. But it’s definitely positive feedback that shows how users can become engaged with the game. The game is a free-to-play title, where users play for free and can pay real money for virtual goods.

The goal, Reil said, is to “create a believable horse. We want you to feel it’s real.”

If the game works, then NaturalMotion’s new strategy will show it has learned from past mistakes when it created games that were exceedingly hard to produce yet didn’t resonate with audiences.

In the game, you can pet, wash, feed and train your horse. That much is standard in horse-training games. But the graphics stands out and the game play looks like it is pretty accessible, since it uses the more intuitive touchscreen controls. One of the cool things is that the horse moves and acts independently, so no two horses will move or act in exactly the same way. Every horse also looks different, and you can tell the horse’s mood by looking at its ear movements.

NaturalMotion was founded in 2001 and initially created game development tools such as Euphoria and Morpheme to enable game developers to build realistic characters that look and move like real people. The tools have built-in physics so that motions look accurate and interaction with the characters seemed flawless. Many game makers have licensed the technology.

But NaturalMotion made a mistake when it tried to take on the giant of the sports game business, Electronic Arts, and its flagship title Madden NFL Football. NaturalMotion made a console game called Backbreaker Football, which featured brutally realistic football tackles. The concept was good. But when it debuted, the game was full of bugs and was panned by critics during the summer of 2010. NaturalMotion released a bug fix that cleared up many of the problems, but the game never recovered.

Reil told us last fall that the company has since pivoted into the iPhone and iPad game business to get its second life in digital games. Using an outside developer, the company released a 99 cent version of its Backbreaker game on the iPhone earlier this year and got millions of downloads. It then created a new studio, NaturalMotion Games, to develop iPhone games and launched games on the App Store such as Backbreaker 2: Vengeance, a sequel to the football title; and Jenga, based on the board game. Both feature cool physics simulations for the first time on a handheld device.

Reil said that the company has five iOS games on the market and that the new games are getting a five-fold return on investment. Each has made it onto the top 10 paid apps chart. To date, the games have been downloaded more than 8 million times and Reil said the company is profitable. Though the games have been successful, NaturalMotion is now switching to free-to-play titles, with a focus on high-end mobile social games. Six more free-to-play games are in the works.

Rivals include other mobile game makers such as Ngmoco, Gameloft, Epic Games’ Chair Entertainment, EA Mobile (a division of Electronic Arts), and Glu Mobile. Investors in the parent company include Balderton Capital. Licensees for the physics technology include Ubisoft, Take-Two Interactive, THQ, Activision Blizzard, Disney, BioWare and CCP. Money from the licensees has made NaturalMotion profitable.