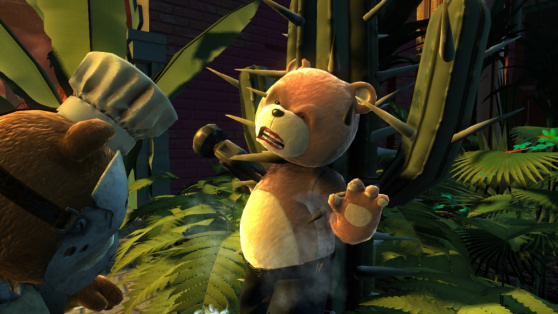 Taking the blood out of a game does not make it less violent. Naughty Bear: Panic in Paradise might fool you into thinking otherwise, but make no mistake: Underneath all that fluff is a sadistic brown bear with severe mental problems and an enthusiastic narrator who’s even more psychotic than Naughty is. You won’t be splashing blood all over the screen, but Panic in Paradise (for Xbox 360 and PlayStation Network) is still all about the killing … and killing … and killing. And parties.

Lots of ways to die
Developer Behaviour Interactive (formerly Artificial Mind and Movement, which created the original Naughty Bear in 2010) has peppered Paradise Island with loads of ordinary objects turned torture devices. Naughty can grab an enemy bear and impale him on cacti, burn him in a campfire, or throw him in a dumpster. Each level challenges players to kill in a new way. These deaths are much more gruesome and include murdering a veteran cop with his own Magnum, pressing the local cook into an edible confection, and even giving Chubby the bear the last liposuction treatment he’ll ever need.

Since you’re constantly killing, you’ll be on the lookout for even more ways to make your enemies pay. And of course, the sweetest revenge of all is to drive them insane … and make them kill themselves.

The life of the party
The bears in Panic in Paradise love to party, and you have to admire their spirit: They act like true party animals, peeing in secluded spots and puking behind dumpsters. When they’re not wandering around, they’re flipping burgers on a grill, chatting with the other bears, and boogieing on the dance floor. These bears have a lot of personality — it’s a shame Naughty wants to tear them to shreds. 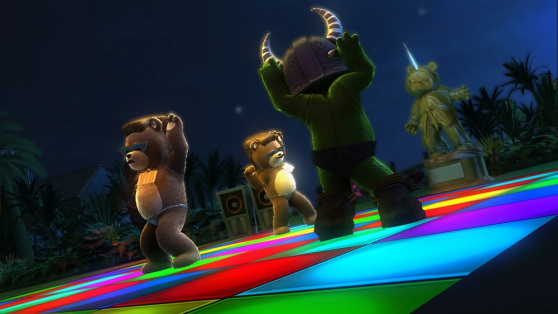 They wear tons of great costumes, too, giving you a good excuse to take them into the woods and steal their clothing, hairdo or mustache, and accessories. Grab someone recognizable and you can mingle with the crowds without scaring them (hearts appear above the heads of those who think you’re their friend) … at least until you start massacring everyone. The game gets creative with how you can use these disguises, too, often requiring you to take out a target while masquerading as someone else — including wearing their face as a mask.

Things to break, people to kill
For a downloadable action-adventure game, Panic in Paradise packs in a good amount to do (expect around 15 hours or more, depending on how much of a completionist you are). You can finish side challenges for extra points, master different equipment (for your head, face, body, arms, and legs) to gain more experience, unlock timed doors with a secret key, and mug bears for new outfits and weapons.

Dead on arrival
Panic in Paradise is troubled from the start. It not only rushes the opening scene (just saying “Not again!” is not enough of an exposition), but it also bombards players with wordy tutorials before they even have a chance to really play. I sat through explanations about enemy punishment, mission objectives, item-based experience, the in-game shop (which actually sells you the content you’ve unlocked), stat and progress screens, and a recap of Naughty’s trip to the island and his first target — all before I could beat the first level. And every time I died, I had to listen to those introductions all over again until I got a few levels in.

You’ve been here before. …
It doesn’t take long for the game to establish itself as a repetitive exercise: As cool as the areas are — with their garden gnomes and a cantina blasting Star Wars music (complete with bearified versions of Han Solo, Chewbacca, and Greedo) — you’ll be playing the same five or six the entire time, only with different challenges and themes. And sometimes those aren’t even different. I fed two botanists to their giant, demonic plants, for instance, and turned friends on each other more than once.

The game tries to pass off these levels as new by giving them different names, but they’re the same handful.

Teddy tedium
At its best, Panic in Paradise is mindless killing of living, feeling stuffed animals. At its worst, it’s an exercise in frustration. The game is set up much like Hitman: You assassinate these bears in a certain way, and it doesn’t take much for enemies (especially those with guns or in a group) to eliminate you as a threat.

That makes for a laborious process. You spend much of your time keeping to the woods and sneaking around, taking out bears one by one, finding a disguise, or creating mass chaos. You think it would be easy to complete an objective, considering you’re invisible to enemies when you’re hiding in any of the forest patches scattered around a level — even if they saw you seconds before. Regardless of how clever and calculating you are, botching your objective is a common occurrence. From there, you can either continue your murder spree and collect as many coins as possible — and risk taking a few too many blows — before exiting and banking your goods, or you can restart the level. The first option makes more sense, since you need as much money as you can get your paws on, but it’s also what causes missions to last so long.

The obscurity of some objectives only makes things worse. Sometimes you won’t have a clue how to progress, and other times, the game makes it unnecessarily difficult. On the levels where you have to kill a bear with his own weapon, you’ll need to unlock it first. That means you have to kill the bear, steal his weapon, kill at least one other enemy with it, leave the area to save your earnings, buy the weapon in the shop (for a price you might not be able to afford right away), and then return with it equipped so you can kill the target properly.

Other times, you’ll enter a level thinking you’re prepared to meet its specifications, only to find out that you should be naked or you need to wear a certain item. These are easily avoidable problems, but instead the game force players to handle them in a roundabout way. 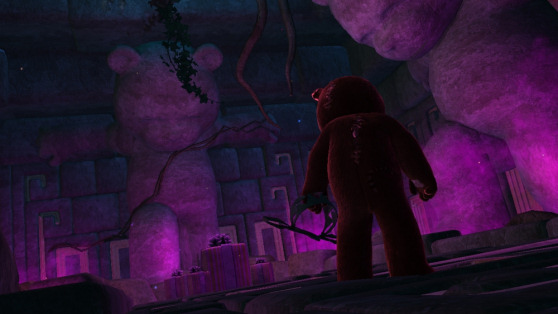 Glitchy the Bear
I also encountered a number of glitches during my playthrough: loading screen freezes (at least three times), A.I. that talked to no one, bodies that wouldn’t vanish from the fire (rendering it unusable for destroying party invitations), a radar map that went haywire, and more.

Naughty Bear: Panic in Paradise is a weak attempt to make its homicidal bear more interesting after the fairly negative reception of the first game. It’s hard to feel compelled to kill bears for sport when the narrator is a little too convinced that murder and violence is the answer and that the other bears deserve what’s coming. It’s not like Assassin’s Creed or any other game where combat is your chief concern — this is just mindless brutality with nothing else at its core.

To top it off, the game pastes the same levels together, gives them a new name and objective, and calls it “content.” But all you’re doing is killing, breaking stuff for money, and dressing in fancy clothes.

Sorry, the other bears are so much cooler than you are.

Naughty Bear: Panic in Paradise was released for the PlayStation Network on October 9 and Xbox Live Arcade on October 10. The publisher provided GamesBeat with an XBLA code of the game for the purpose of this review.