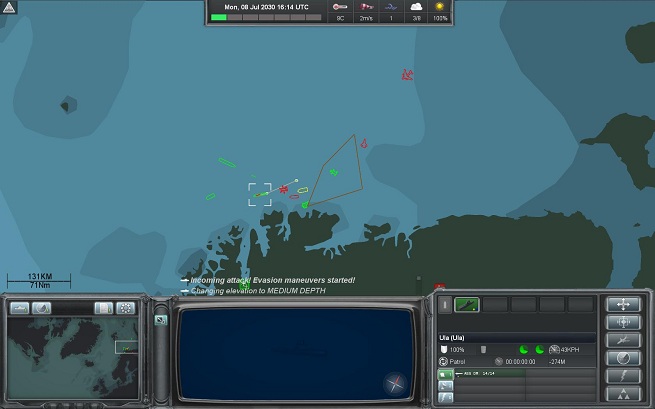 Naval War: Arctic Circle, a real-time strategy title from Turbo Tape Games for PC, opens with a static, dull-grey warship riding atop a dull-blue ocean underneath a dull-grey, overcast sky. Sometimes the audio skips every three or four seconds for minutes on end, driving an irritating wedge between my ears. I should have realized this was a clear warning sign foreshadowing what laid ahead.

Boredom permeates so much of Naval War that I had trouble keeping my eyes open while playing. What should seem like simple commands to issue are in reality unnecessarily obscured and complicated to execute. Despite a wide array of depth in how you can order your units around, too much detracts from the overall experience.

Detailed control options
Naval War offers an incredible amount of commands for you to explore. Within the movement planner, you can set depth, altitude, and speed, and you can toggle aircraft range indicators and currently issued waypoint designations. In the battle planner, you can select individual armaments to fire, units’ engagement strength level, and orders for when to attack enemy vessels.

From the flight deck, you can organize aircraft into squadrons. You can choose launch speed and elevation. You can set the mission (air superiority or naval strike, for example), which affects what the installed weapons will be. You can turn on or off sensors, sonar, and radar for everything in your fleet. You can issue special orders to some units, such as where to deploy mines or sonobuoys or when to use jamming devices. Finally, you can create group formations using a Battleship-like grid layout planner.

All of this detail grounds the game in an experience that feels realistic and brimming with tactical possibility. Unfortunately, the Naval War suffers from several issues that left me with a sunken fleet. 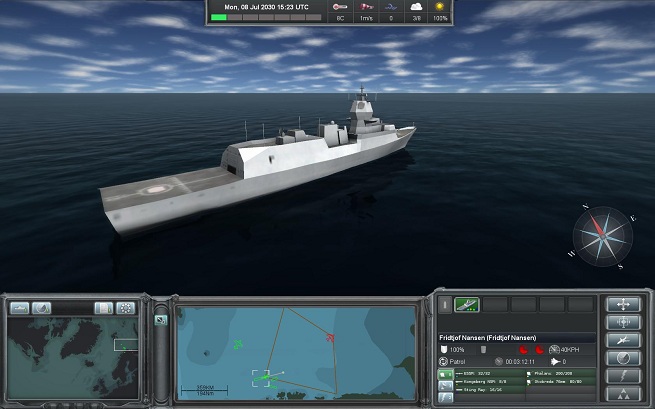 Real-time-with-pause breaks pacing
Great strategy games like X-Com: UFO Defense and Starcraft play to a deliberate pace. In the former, the turn-based nature of the tactical combat portion forces you to watch every command issued and the results of actions carried out. In the latter, the real-time engine nudges you to quickly respond to events unfolding around the map without a moment to spare.

Naval War uses a system that allows you to manipulate the speed of time progression. At the fastest setting, warships and aircraft act with near immediacy, and at the slowest, the game is practically paused.

But Naval War constantly halts the action by default whenever something significant occurs, like a bogey popping up on your six or a torpedo jetting toward one of your subs. When this happens with frequency and in quick succession, the relentless interruptions become a nuisance to implementing your overall strategy.

While you can adjust to what degree that these slow the game down, this sort of hybrid compromise still eliminates the deliberateness of a turn-based system and becomes a crutch that the designers can fall back on to avoid crafting an intuitive interface for controlling units. You’ll find yourself either trapped in elongated periods of planning with no action or in short bursts of fast-paced skirmishes where you’re unable to respond quickly and decisively.

Obtuse user interface (UI)
I’ve tangled with complex UIs before. The Men of War series’ is notoriously intricate, and the aforementioned X-Com uses a large grid of buttons that take up a good bit of the screen. But Naval War goes further by hiding key functionality behind a series of menu buttons and window pop-ups.

As a result, many of those detailed control options that are likely to tickle your command-orientated mind require lots of clicking and navigating through the interface. Launching aircraft from a carrier, for instance, requires six steps: clicking on the carrier, clicking on the flight deck, selecting from the available jets or helicopters, clicking to place them in the launch queue, selecting a mission, and finally drawing a rectangle by holding the right mouse button over the area of the map where you want to send them. Whew.

I’m just scratching the surface here. Turbo Tape has decided to bury so much minute control in a labyrinth of menus and windows that you’ll feel overwhelmed and lost, and you’ll likely overlook critical features for commanding your fleet. 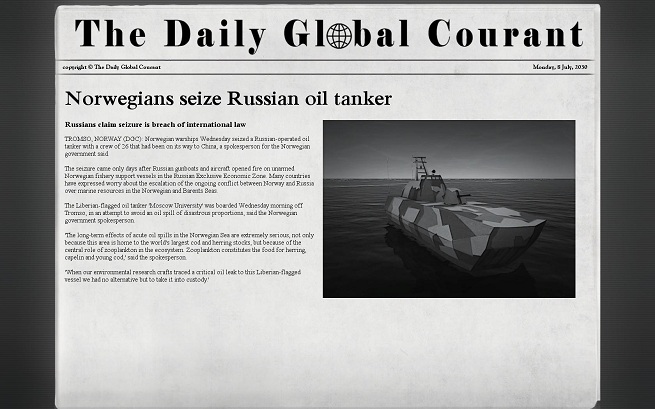 Weak narrative devices
Before every mission, the front page of The Daily Global Courant will spin toward the screen. Its single article summing up current events in the Arctic Circle only takes up a small portion of the paper; a large photo and a generous amount of white space fill in the rest. Hell, Turbo Tape, if you’re trying to lend an air of seriousness to this story, you could at least make up a complete-looking paper. Regardless, this is about as exciting as reading Associated Press wire stories in The New York Times’ International News section.

After this, you’ll sit through dialogue passively told through text boxes next to motionless talking heads. With such (completely unedited by me) witty lines as “[t]he bad news are [sic], we seem to be at war with Russia,” you’re sure to be on the edge of your seat! My favorite back-and-forth: “I’d have thought you’d at least be rear admiral by now.” “Well you know what they say about rear admirals.” Ha! Oh, do tell!

To be perfectly honest, I didn’t get too far. The NATO campaign begins with a series of military exercises in the Arctic Circle that serve as your tutorial, but after that turns into full-on war with Russia, my brain just checked out. Turbo Tape’s shoehorning in a skeleton plot and bland officers’ banter doesn’t do much to motivate me to play further.

Naval War falls flat — and not just because of the drab color palette (if you’ve ever attended a U.S. Navy event aboard a ship, you’d notice that it’s all blues and grays, anyway).  As much as I enjoy some of the oddball strategy games available, I can’t bring myself to recommend this to even the most ardent grognards.

Naval War: Arctic Circle released on April 10, 2012 for PC. Publisher Paradox Interactive provided GamesBeat with a Steam download code for the purpose of this review.