When video game publisher Bethesda Softworks handed the Wolfenstein license over to Machine Games, staffed by the founders of Starbreeze Studios (The Darkness, The Chronicles of Riddick: Escape from Butcher Bay), it fell to creative director Jens Matthies to figure out what to actually do with it. Enter the white board.

“We were writing down different ideas, 1940s Wolfenstein, World War II style, this and that,” says Matthies. “And then all of us were like, ‘We really want to do one where the Nazis have won.’ We were thinking, ‘Are we really going to write this down? Because if [Bethesda] doesn’t like it, they’re going to think we’re all stupid.’”

They did write it down. Nobody thought they were stupid. Almost three years later, Wolfenstein: The New Order has defrosted series hero B.J. Blazkowicz to kill Nazis and their Nazi robots in 1960s occupied Europe, and Matthies is eager to tell me all about it. Within reason.

GamesBeat: OK, no screwing around. When does Mecha Hitler show up?

Jens Matthies: There is a plan for this, but I can’t divulge anything.

GamesBeat: We started with this very menacing, almost Tarantino-esque scene where [top Nazi commander] Frau Engel toys with B.J. on a train, not knowing who he is. Later on, he’s growling hyper-cheesy lines like, “Fuck you, moon.” What kind of vibe are you going for?

Matthies: I think Tarantino is a very good reference. We’ve certainly used it internally to align our heads around the project. What’s really awesome about Inglourious Basterds is that they’re walking this tightrope between scenes that are incredibly dramatic and full of tension, and then they’re shooting Hitler in the face. It’s completely disrespectful of history, but it has that catharsis. It’s very much that same tightrope that we’re trying to walk.

GamesBeat: B.J.’s definitely a big slab of man. And he actually has that nice Midwestern just-off-the-cattle-ranch look to him. 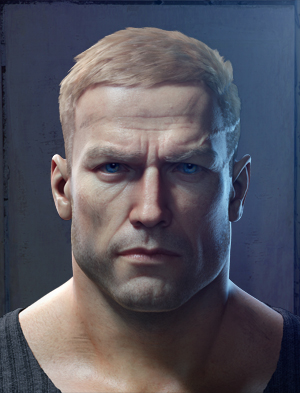 Matthies: Yeah. He has this little bit of Texan twang to his voice. He’s very much inspired by the action heroes of the day, like the Stallones and the Schwarzeneggers.

GamesBeat: He’s very monosyllabic, isn’t he? There’s this scene with him and [resistance fighter ] Anya where she’s asking simple, personal questions, and he’s giving her, “Yeah,” or “No.” He’s not even being a tough guy. These are the answers he can come up with.

Matthies: Yeah, exactly. He has a very specialized skill set, and that is kicking Nazi ass. It’s very common for your protagonist to be the sort of alpha person all around. They have to be the smartest, the best-looking, the strongest, all of these things. I don’t think that’s necessary.

GamesBeat: It seem very much like just talking to Anya was not his element. But when we saw him in the Nazi base — he was finding information, relaying that back to base, taking the initiative – he was much more energetic and dynamic.

Matthies: I like that you picked that up. There’s a lot of power in letting B.J. be B.J.

GamesBeat: So how do you design the futuristic Nazi 1960s? I noticed something that looked like a Luger machine pistol.

Matthies: We just take everything, and we dial it up to 11. It’s very important for us to start with a world where, if we want to do a Nazi fucking robot, that’s something we can do.

GamesBeat: And why wouldn’t you?

Matthies: Exactly. Why wouldn’t we?

GamesBeat: Is there going to be any sort of multiplayer or New Game Plus?

Matthies: No. We’re passionate about the single-player. We work with a publisher that cares about quality first and foremost, so we’ll be doing what we do best.

GamesBeat: Is there going to be anything to extend the game beyond the campaign?

Matthies: There’s a lot of depth to the gameplay and secrets to uncover. There’s also a point at which something, depending on the choices that you make, might create a fork. You can think of it like an alternate ending, but it’s really early in the game, so it affects the whole game. There’s a good reason to go back and make the other choice.

GamesBeat: What are you adding to the Wolfenstein franchise with this game?

Matthies: We respect the legacy, but we’re also taking such a drastic step. We are taking the soul of the original Wolfenstein 3D and realizing it with what’s possible today. That’s very much how I like to look at it. Back then it was possible to publish a brochure, so to speak. Now we can write a novel. This is the novel version. But the only thing that matters is that you have to kick a lot of Nazi ass with serious weaponry.