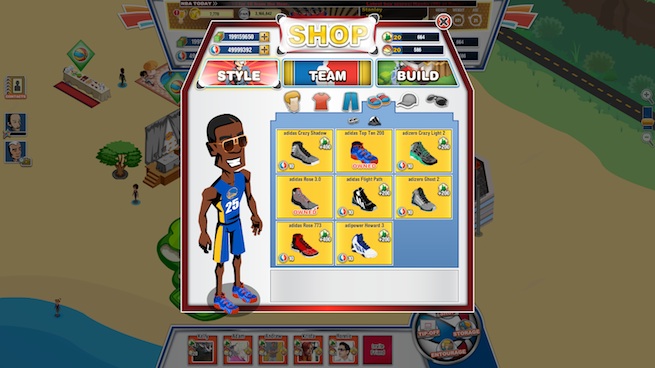 So you just picked up NBA 2K13. And, as usual, you can’t stop playing or thinking about it, especially when you’re away from your console because of work or (even worse) social obligations.

Publisher 2K Sports understands your pain. With its NBA 2K Everywhere initiative, it’s making sure you always carry a piece of the game with you thanks to a pair of apps that tie back into the Xbox 360 and PlayStation 3 versions of NBA 2K13. MyNBA2K for iOS, Android, and Kindle Fire devices is a free companion app that lets you “warm up” before the big game on your console with a variety of minigames and rewards. NBA 2K: MyLIFE is a social game on Facebook that also sends bonuses back to your NBA 2K13 career as you manage your player’s life off the court.

Both of them will be available soon with MyLIFE debuting next Tuesday, October 9, while MyNBA2K comes out this Friday, October 5. Here’s a look at what you can expect when both apps are live.

Signing autographs until your fingers bleed

As a star NBA player in NBA 2K13’s MyCareer mode, you’ll need to keep your fans happy, and a good way to do that is through signing autographs in MyNBA2K. Once you set up the style of your signature, you have 60 seconds to sign as many posters of yourself as you can, and fans will either praise or insult you depending on how accurate your signature is to the original. As a reward, you can choose to increase your overall number of fans or you can accept virtual currency (VC) — used throughout NBA 2K13 to buy anything from NBA players to shoes — instead. Both fans and VC are immediately sent to your console game. 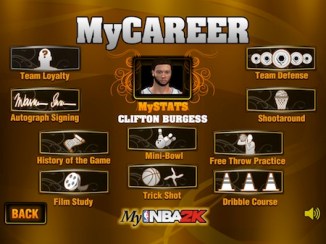 These rewards are only possible if you log into MyNBA2K with your MyPlayer account, giving you access to Autograph Signing as well as nine other minigames (pictured right) created by developer Visual Concepts. Each game has a VC reward option (you can earn up to 1,000 VC every 24 hours) along with specific bonuses, like earning a temporary free-throw shooting boost from playing Free Throw Practice. The boosts only last until your next match in NBA 2K13, though you can keep coming back to the app to earn more afterward. The app also features MyTeam, a top-down, turn-based version of basketball (pictured in the gallery below) that uses players you unlocked from the same mode in NBA 2K13.

If you don’t own a copy of the console title, however, both MyTeam and the minigame Team Loyalty — which quizzes you on your teammates’ performance from MyCareer mode in NBA 2K13 — are inaccessible, due to the fact that they don’t have any console data to draw from.

“If you can cram in 15 minutes here, 10 minutes here, 30 seconds here on the bus … you can get 50 more VC in the game, stat bonuses, or whatever floats your boat,” said Rob Nelson, senior producer at 2K Games, in an interview with GamesBeat. “So that’s [MyNBA2K]: 10 [minigames] developed by Visual Concepts, nine if you don’t have an account at all, just for free.”

Why make (virtual) friends when you can buy them?

The other way of earning VC, fans, and even exclusive dunks (from leveling up) is through Facebook with NBA 2K: MyLIFE. Ditching NBA 2K13’s realism for a cartoonish look (where you can sync your player’s appearance from the console game), MyLIFE is all about establishing strong social connections with your fans and other NBA stars.

One of the keys to succeeding in MyLIFE is hosting parties in your home. At these parties, computer-controlled guests and real-life friends can interact with your objects, like basketball courts or swimming pools, to generate Excitement points and Rep. The more Rep you have, the more buildings and types of guests (like VIPs) you unlock. Accumulate enough Excitement points during the event and you’ll receive endorsement offers, which gives you cash to expand your little plot of land. 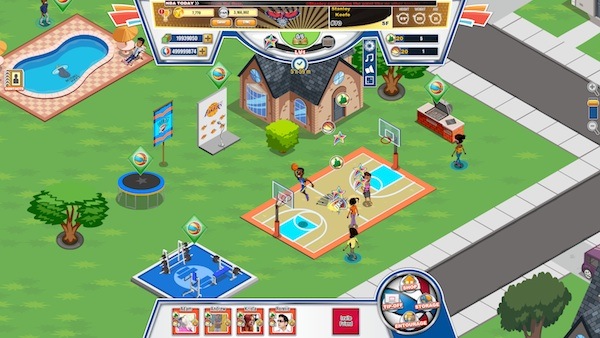 In the demo shown to GamesBeat, Washington Wizards player John Wall (the only VIP at the party) challenged the player to a Dunk Contest. As one of the minigames in MyLIFE, the Dunk Contest requires you to hit the right spot on a flashing, colored meter to nail a slam. The fancier the dunks you choose to execute, the faster the meter moves. After Kelly Wilson, social games associate producer at Visual Concepts, finished the match, she earned 50 fans for her MyPlayer account.

And since she played a game with Wall, she was able to interact with him and generate Relationship points. This number increases each time you hang out with the VIP, and eventually, that individual will become one of your best friends. While this usually takes a lot of virtual footwork, Wilson sped it up by using MyLIFE’s premium currency (bought with real-world cash). You can then add your best friends to your entourage, which will follow you around everywhere you go and boost the amount of points you normally receive.

The other minigame, Tip-Off, simulates the outcome of a basketball match based on your current stats. Win or lose, you’ll get rewards in the form of VC and fans for the console experience, as well as other bonuses for use in Facebook. You can also unlock NBA pros in NBA 2K13’s street-basketball mode, Blacktop, if those same players visit your estate and become your friends in MyLIFE. Otherwise, you’d have to spend VC in the console game to play with them.