Although legal troubles caused Electronic Arts to cancel NCAA Football 2015, a determined community on the Operation Sports forums are keeping the dream of an updated college football title — barely.

And you have other options, too, than just playing a modded version of NCAA Football.

The end result isn’t pretty. NCAA 2014 still uses 2013 graphics on last-gen consoles. It will fight to shatter your imagination by using stale commentary and refusing to acknowledge your updated players.

This is probably the best option for hardcore college football fans, though. With a little work and some imagination, players can survive the dated visual experience and cement a new college football legacy in 2014.

The most impressive accomplishment of the Operation Sports community is the development of a playoff system. It’s tricky to implement if you don’t know what you’re doing, but Operation Sports member PocketScout gives step-by-step instructions in a comprehensive thread here. Basically, you need to download a few programs and follow the steps listed in the thread.

Here is the video tutorial for setting up the playoff system, complete with weird Eyes Wide Shut-like theme music:

It’s obvious that this effort required quite a bit of modding experience to achieve, so we tracked down the project’s architect.

“I have never been content when I found problems in the games I loved,” said Tristan “PocketScout” Simons, who has modded the NCAA Football franchise since 2010 and even created a companion app that helps with scouting new recruits in the series. “Instead of just posting something in a wish-list thread, I try to fix the problem as best as I can.”

And that’s just what Simons did with his four-team playoff structure, which mirrors the actual NCAA football playoff system set to begin this season. Simons used an existing program, Xanathol’s Generic Editor, as the framework for his playoff setup. Another user, Yengator, helped perfect the system, which Simons said illustrates the sense of community required to pull off this type of update.

Simons’ programs appear to be taking hold in the sports game world. He estimated 1,800 total downloads over the last few years.

“As a community, we have come together to make the most of what we have,” Simons said. “The roster guys will cover their end, and the modding side has figured out the major obstacles. I feel like this game is good enough to make it three or four more years for the diehards out there.”

Those “roster guys” work diligently to make accurate and up-to-date teams and players for NCAA Football 14.

Sports websites like Bleacher Report have thrown their support behind two community-driven roster files: a PS3 version from PSN user KW1KC (a continuation of the file created by no1geemoney) and an Xbox 360 edition from Xbox Live user Call Me LSU. Players can find these users through NCAA Football 14 on Xbox Live or PlayStation Network and download their rosters.

The Operation Sports indicated that both KW1KC’s and Call Me LSU’s roster files were actually the work of a small team. These teams spent hours poring over scouting reports and input from fans to determine the player ratings for the 2014 NCAA football season.

No one is paid for any of this work. It is a labor of love from a few diehard individuals. The resulting rosters are about as accurate as the first batch of official EA rosters, which normally end up being horribly off by the end of the season, anyway. 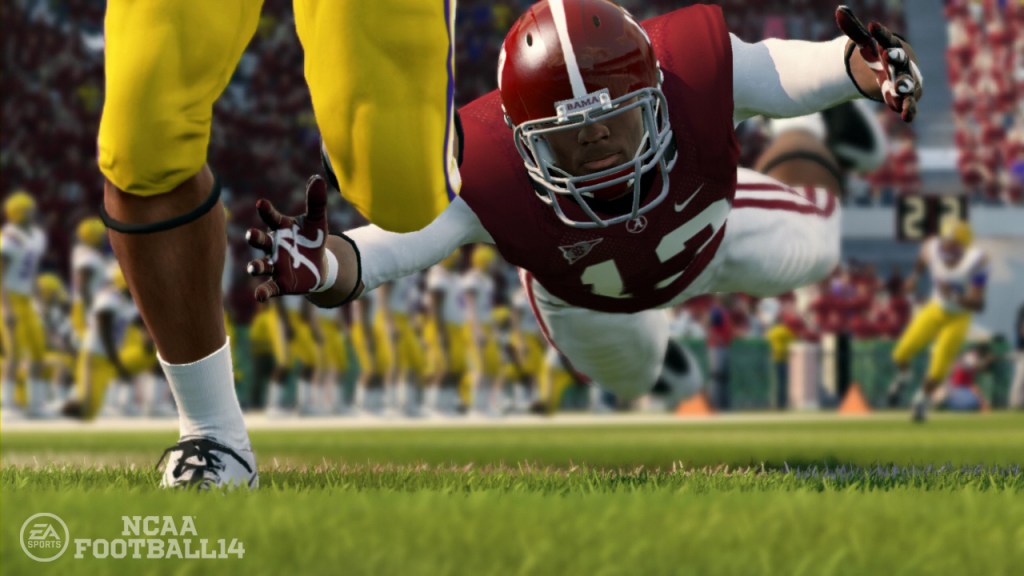 Above: New rosters won’t include graduated players like Alabama’s Deion Belue (Above).

If you download one of these rosters and disagree with some of the ratings, you can customize them on your own. Many Operation Sports members did exactly that and shared their new squads with the community, which in turn integrated some or all of the changes into the master roster file. This can taint the lineups just as easily as it improves them, but the teams seem to know how to sort the good suggestions from the bad.

This is an ongoing process, and the PS3 and Xbox 360 teams have both pledged to keep updating through the fall.

So why go through all of this trouble just for a college football title? Why not just wait for Madden 15?

“I have bought every NCAA Football game since it was first released on PC in 1997,” Simons said. “The only Madden game I ever bought was 2004, and I traded it back within a month. I have no desire to spend my gaming time playing any NFL game. I just love college football too much, and I think many people within our community and beyond agree with me.”