Ndreams, which last week announced its virtual-reality arcade shooter Gunner for the Samsung Gear VR, has raised $2.75 million in a new round of funding.

Virtual reality is a hot new platform that showed more momentum at the recent 2015 International CES, the big tech trade show in Las Vegas. Samsung showed off its Gear VR device, which combines a Samsung Galaxy Note 4 smartphone with an Oculus VR-based headset. And Ndreams is one of the companies that wants to be one of the pioneering game developers at the start of the VR market.

Ndreams is making titles for multiple VR platforms, including Oculus Rift, Gear VR Innovator Edition, and Sony’s Project Morpheus. The studio is based in the city of Farnborough, in the Hampshire region of England. The Gunner demo is available as a free download for now. But once the Oculus storefront goes live, Ndreams and Oculus will publish the full game. In this case, Oculus VR is acting as the co-publisher of the title. The funding comes from Mercia Technologies, a tech-focused investment company.

Patrick O’Luanaigh, chief executive of Ndreams, said in an interview with GamesBeat that the firm has been working on virtual-reality software since 2013.

“When we saw the Rift for the first time, we fell in love with it,” he said.

Ndreams will use the money to fund its continued expansion and explore new publishing and acquisition deals related to other VR titles. It has already created Gunner, as well as a soothing vacation VR experience dubbed Perfect Beach, where you lie on a tropical beach in a virtual-reality reverie.

Ndreams is also working on The Assembly, a title for both the Oculus Rift and Sony’s Project Morpheus, a VR platform for the PlayStation 4 game console. The Assembly is a dramatic two–character adventure where players need to make tough moral choices and unravel the mysteries within a top-secret underground bunker.

The company has been around since 2006. Ndreams previously created games for Sony’s PlayStation Home virtual world, which debuted on the PlayStation 3 platform. That experience went out of fashion, and as a result, it is shutting down soon. But Ndreams sold more than 1.8 million virtual items, and it had 18 million visits to its free-to-play Aurora space.

“PlayStation Home provided steady revenue for a few years,” O’Luanaigh said. “But now, all of our focus is on VR, and that is why we are getting the investment. We think that 2015 is the year when you will see a lot of exciting headsets launch.”

Ndreams currently has five VR projects in development and has been carrying out research in new unexplored areas of virtual reality, O’Luanaigh said. Ndreams recently teamed up with U.K. VR entertainment firm, Virtual View Productions, to explore the crossover between filmed and game content in VR. O’Luanaigh said that the VR experiments are teaching the team a lot of things, like how fast-action titles don’t really work that well in VR.

“I wouldn’t recommend a Call of Duty game in VR,” he said. “Slow movement works well. One of the things about VR is that you will not see traditional games succeed.” 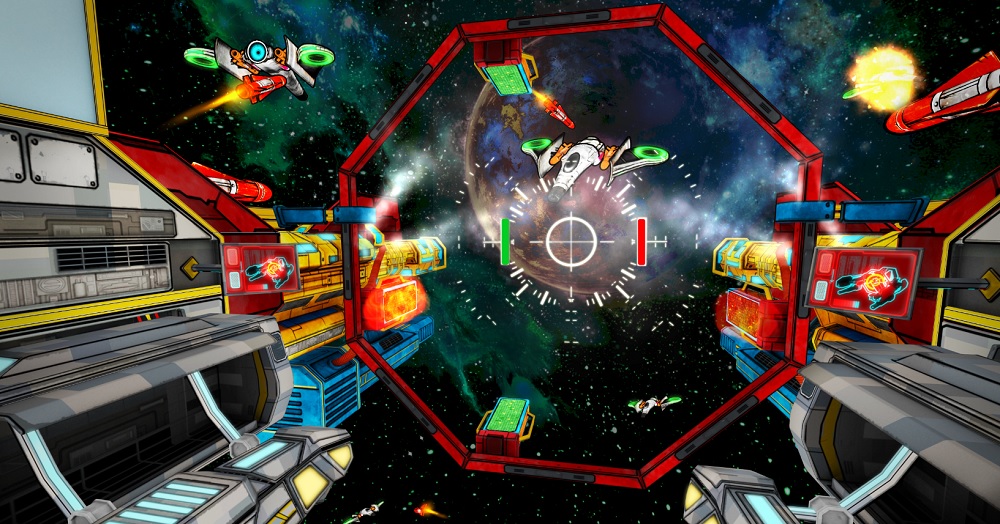 Above: More action from Gunner.