Neon has raised $10.5 million to build a blockchain-based first-person shooter game dubbed Shrapnel that the company says will be a triple-A production.

Seattle-based Neon is an independent video game studio and publisher headed by Mark Long, a longtime gaming leader who spun the company out of HBO. It’s another example of game developers answering the siren call of blockchain and nonfungible tokens (NFTs), which are as hot as can be right now.

Griffin Gaming Partners led the round and other investors include Polychain Capital and Forte. Forte will also provide technical support to the project.

Long talked to more than 60 venture capital firms in crypto and gaming. Long said in an interview with GamesBeat that he chose to work with the smartest VCs because he believes they can help the game succeed.

“I couldn’t be happier to be working with them,” he said.

Designed to reward and empower players and creators, Shrapnel’s full details will be revealed next year.

Long said the company did market research and saw that players really want to own their own digital items. And he plans to tap Griffing Gaming Partners’ expertise and the technical chops of Polychain and Forte to bring to life a game and mod platform that Long has dreamed about making for years.

Above: Neon spun out of HBO

Spun-out from HBO Interactive, the Neon team has years of professional experience in transmedia, virtual production, and gaming-as-a service. Comprised of BAFTA and Emmy award-winning video game industry veterans hailing from some of the world’s leading video game companies including Xbox, Electronic Arts, HBO, Irrational, and Zombie Studios amongst others, Neon’s vision is to create the most immersive gaming experience ever seen in the crypto space.

“Griffin is thrilled to be working closely with Mark and the Neon team as well as an awesome group of strategic partners,” said Pierre Planche, partner at Griffin Gaming Partners, in a statement. “It is exciting to see a triple-A games team of this caliber contribute to moving the blockchain gaming ecosystem forward with a focus on quality gameplay and long-term value.”

He added, “Neon is authentically leveraging some of the most exciting pillars of utility that blockchain has to offer gaming — its core game design innovates on competitive game modes, and its digital economy will directly reward and empower the community. As a long-time FPS player and prior esports competitor in the genre, I know Shrapnel is exactly the experience my peers and I can’t wait to get our hands on.”

Ben Perszyk, Partner at Polychain, said in a statement, “Polychain has long held that crypto will enable novel, unforeseen behaviors, businesses, and use cases, and we are seeing another example of that now with Shrapnel. We believe crypto assets and incentive structures will fundamentally change the way users play games, and we’re extremely excited to see the experienced team at Neon push the envelope forward on what’s possible in the crypto gaming industry by integrating crypto into a deep, immersive, triple-A-style FPS experience.”

And Josh Williams, CEO of Forte, said in a statement, “Experienced game developers like the Neon team know that core gameplay and engagement mechanics are crucial for staying power. They are committed to creating sustainable blockchain ecosystems by putting game design and user experience first and we are honored they’ve chosen Forte to help them bring their vision to life.”

Long made a familiar argument about why NFTs are good for players.

“Players never really own what they buy,” he said. “It’s all locked inside the company. But there are surveys from Newzoo that indicate that players would really love to own what they’re buying.”

Long didn’t always feel that way, as he “came slowly to blockchain.” He started looking into cryptocurrency in 2017, which was relatively early for a lot of game executives. He was dismissive about the initial coin offerings (ICOs) that faced regulator crackdowns from U.S. regulators.

“My thesis is that this generation of gamers has grown up learning to visually program Minecraft and then aging into Roblox, which is kind of the Legos of game creation,” he said. “We have Fortnite with its build mode and we know they’re going to spend a billion dollars to turn it into a user-generated game platform.”

Long knows that he doesn’t want to create a game with a pyramid of users, which some of the blockchain games are doing as they embrace “play-to-earn” strategies where players can earn rewards, own their own digital items, and sell them to players who join later. But he sees a lot of opportunities that so far have been unexplored in blockchain games.

One of the reasons that Long chose to take money from Forte is that they’re immersed in the blockchain infrastructure. Companies like Forte are trying to offload the difficult chores so that players don’t have to worry about issues like compliance or figuring out how to create crypto wallets, Long said.

Long acknowledged that the legalities of blockchain, crypto, and NFTs are very complex and navigating them isn’t easy. The company has had to hire economists to make sure the economy of the game works properly with NFTs. The company has 10 people now and Long hopes to scale it up to around 70 people.

Making a free-to-play first-person shooter would be “folly,” Long said.

“But because it’s blockchain, you’re in a blue ocean of opportunity,” he said. “More importantly, what we’re really thinking is an extraction game that players can modify to their heart’s content. I look back to the 1990s, and I loved modding Quake and America’s Army and there is something about that joy that I want to return to with this title.” 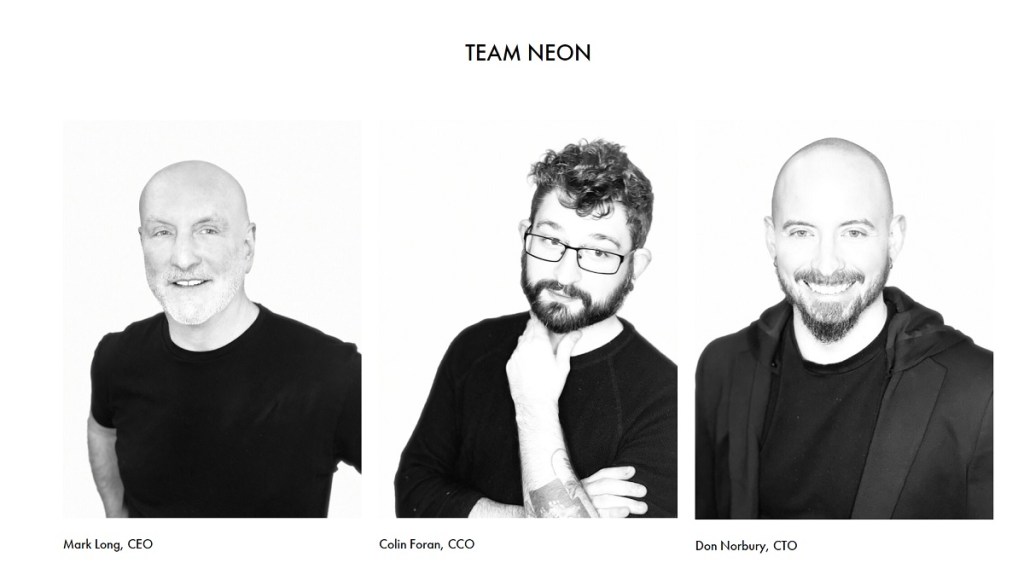 Long said the company will make an “extraction-style game.” Long believes that a lot of games have low density when it comes to packing players into a first-person shooter map. Those maps suddenly flip to deathmatch, high-density maps when you call for an extraction.

Long plans to create a platform that allows players to build mods that can create different versions of the game.

To support this vision, a range of blockchain and deep tech experts will support the architectural and design needs of the game.

Neon is currently hiring for its Seattle-based team. Game developers looking to join a best-in-class team at the vanguard of a new era in gaming can reach out to jobs@shrapnel.com.

Advisers include Mike Wilson of Devolver, and Derek Kolstad, who was the creator of the John Wick series. I met Long years ago when he was creating the Hawken mech combat game at Meteor Entertainment.