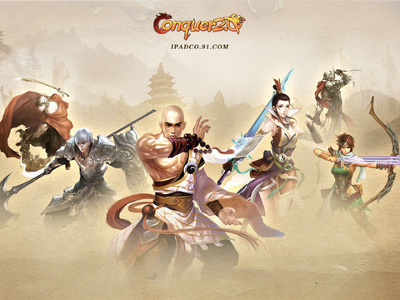 Conquer Online, one of the oldest free-to-play online games in existence, has migrated to the iPad as of today. It might not be the first massively multiplayer game to make its way to the App Store, but it is certainly one of the most recognizable, having been online since 2003. With over 10 million registered accounts, the game has a big following.

Unlike most of the more recent F2P MMO offerings, Conquer Online is a 2.5D MMORPG, meaning the perspective is more akin to Diablo than World of Warcraft. Considering the age of this game, many of the current tropes of MMOs remain firmly planted in the core of Conquer. There are six classes: Monk, Ninja, Archer, Taoist, Trojan and Warrior, all with unique attributes and skills.

Although the dated graphics might scare away those coming off the high of Infinity Blade II, the simplicity of Conquer Online is one of its greatest charms. Level progression is quick and easy, loot constantly covers the screen, and everyone is always in danger of the open player-versus-player fighting, one of the features the game hinges on. That’s right, anywhere outside of the towns is fair game, so it’s up to each player to decide if the rewards outweigh the risks when attacking passersby.

Other MMO staples such as mounts, improving equipment, and player housing make appearances as well. Social groups are abundant, including both Clans and Guilds for players to create and join. Marriage is also an option for the RP-centric gamers. There’s even a full-fledged game of Texas Hold’em Poker available in-game. Once players reach level 120, a feat that should take several dozens hours, a “new game plus”-type option called Rebirth. Rebirth starts players back from square one with a stronger starting character than before, able to replay through the entire game again.

The reaction has not been entirely positive thus far in terms of optimization for the iPad, as seen in the review from 148apps, stating that “[w]hile Conquer Online needs work doing to it to make it more user friendly for iPad owners, the groundwork is there.” On the other side of the spectrum, MMOGames lauds the very same control scheme, praising its simple click-to-attack gameplay as appropriate for a casual mobile title. It will be interesting to see how reactions pan out over the coming days and weeks as players further explore the port’s mechanics and changes. Until then, the game is currently free on the App Store.