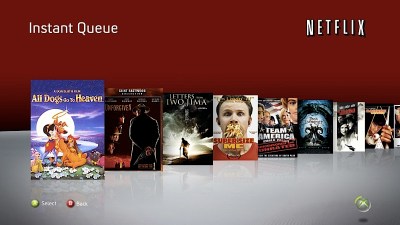 Microsoft said today that more than a million Xbox 360 users have downloaded the Netflix application via Xbox Live since the alliance was launched in November.

In less than three months, Xbox Live gold members (who pay $50 a year) have watched more than 1.5 billion minutes of movies and TV shows. I have checked it out myself, but I’m disappointed with the selection. For instance, I had 60 or so movies in my queue on Netflix that I wanted to see. But there are only about 16 of those movies available to watch instantly on the Xbox 360 Netflix application. Most of the new movies weren’t available. That’s the case even though Netflix now has 12,000 movies and TV shows available on the Xbox 360. I’ll see if it improves.

It’s still a good deal. People who subscribe to Netflix can watch movies for free on the Xbox 360 on the living room TV, provided the Xbox 360 is hooked up to the Internet. Netflix has 9.4 million subscribers while Microsoft has more than 17 million Xbox Live subscribers. In addition to Netflix, Xbox 360 owners can download as many as 17,000 videos from other services on Xbox Live.

The Netflix application really turns the Xbox 360 into a convergence box, as Microsoft originally hoped it would be, able to play both video games and serve as a hub for watching movies and TV. It is one of the coolest new features that Microsoft introduced in November when it revamped its Xbox Live Experience for consumers. If Netflix can obtain more new movies, it would be a killer application. Sony has Blu-ray movies on that distinguish the PlayStation 3, but it doesn’t yet have a download movie deal with Netflix.

It’s funny that, even though Microsoft bet on the wrong next-generation DVD format by voting for the now-defunct HD DVD format instead of Blu-ray, it is now winning in the movie download space in the battle with the PlayStation 3.