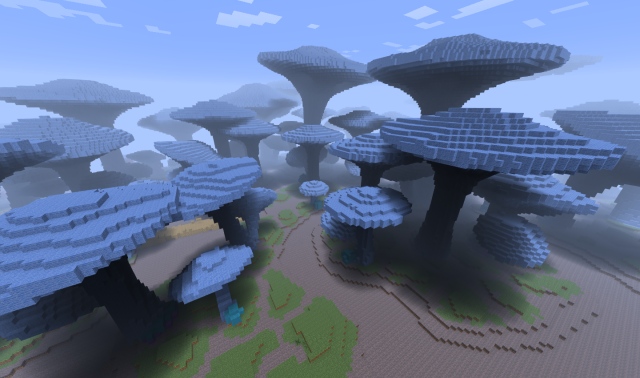 A 27-year-old U.S. graduate student known as “Ramses” is creating a stir in the community of Minecraft, the sandbox-building game by Swedish development studio Mojang. Within Minecraft’s blocky world, he has spent about 100 hours so far on a re-creation of Azeroth, the enormous setting of Blizzard’s massively multiplayer game, World of Warcraft (WoW).

Minecraft generates customizable 3D worlds that are made of cubes. Because every single part of the landscape can be altered, it has seen its fair share of astonishing user creations like Middle-earth or the Death Star trench run from Star Wars: A New Hope. Replicating World of Warcraft’s sprawling lands one block at a time is probably the most ambitious Minecraft replica yet.

After re-creating the continent of Kalimdor, Ramses started working on adding the other landmasses from World of Warcraft. GamesBeat is unveiling the very first screenshots of Minecraft scenery inspired by the Outland zones from the Burning Crusade expansion. The pictures on this page show the Minecrafted landscapes of Zangarmarsh, Nagrand, and Terokkar Forest. A gallery with Kalimdor screenshots can be found at imgur.com.

In an exclusive interview with VentureBeat, creator Ramses (we’re referring to him by his online moniker as he would like to maintain his anonymity) explains some of the technologies he is using. Once the project is finished, he is planning to release parts of the software library written to automate the task of replicating 3D worlds: “This will help anyone trying to do other large-scale conversions into Minecraft in the future.” 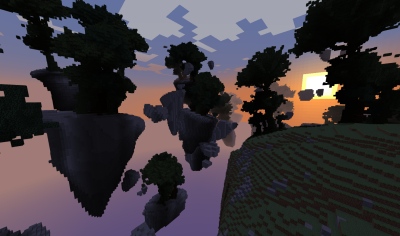 GamesBeat: The first question that comes to mind is, “Why are you doing this?”

Ramses: Porting content from popular video games into Minecraft is something that others have done before, but until now, no one has been able to do it at this scale. Such large-scale conversions are only possible with special tools, ones I knew I would have to design myself.

I’ve been a fan of the Warcraft series since I was a teenager, so the challenge was appealing to me. I also knew that the results would impress fans from both games, so there was a lot of motivation in that. When I realized it was something I was capable of doing, the temptation was hard to resist.

GB: How many hours have you already put into the project, and what is the current completion rate?

Ramses: The project began when I started writing code less than a month ago. I don’t know the exact number of hours I’ve spent working on the project, but it is probably around 100 hours. The original goal was just to recreate Kalimdor, which I’ve since completed. I now plan to re-create the other three continents as well. The surface area of Kalimdor is equal to about 35 square kilometers [13.5 square miles], so attempting the conversion without special software could have taken months or even years.

GB: How did you calculate the dimensions of the surface area?

Ramses: The playable character in Minecraft) is two blocks tall, meaning 1 block equals about 1 yard. The total map size, including the ocean and air, is 6656 x 12288 blocks wide and 1536 blocks tall, or approximately 6.1 km x 11.2 km x 1.4 km. I did not include the area of the open ocean in my estimate of 35 square kilometers.

GB: What tools are you using to “translate” the WoW world data into Minecraft?

Ramses: The conversion is largely automated. I’ve written software that takes models from World of Warcraft and converts them into Minecraft blocks using a process known as voxelization. The entire continent is converted this way, including all the buildings and natural details, down to the individual tree stump.

I also designed a tool to help assign Minecraft blocks to each texture. This ensures that the appropriate materials are used. For example, if a specific texture is labeled as wood, the conversion tool will generate wooden blocks for that object. Once the textures are labeled, the software requires very little intervention beyond specifying the boundaries of the world to generate.

GB: How will Minecraft fans be able to actually play in this re-creation of Azeroth?

Ramses: Due to the scale of the project, we have not yet decided if or how to release it as a download. We — meaning myself, along with some members of Cursecraft — have tested the current version of Kalimdor on a small server, and it is playable in multiplayer. I hope to eventually make the map playable on a public server hosted by Cursecraft [a Minecraft server operated by the online community Curse.com].

Some server-side modifications will be needed to re-create the experience of a seamless continent, in particular to address the height restrictions in Minecraft. The height of Kalimdor is 1536 blocks tall, over 10 times the default height limit of 128 blocks.

GB: Are you also going to add non-player characters and monsters?

Ramses: Since this is Minecraft, we would like to have players add the finishing touches to the map themselves, which is possible in-game. So, the final step in the conversion process is actually to crowd-source the details that were missed by the software. The decision to add monsters or NPCs to the game is something we have only discussed but may come later if it seems reasonable to do.

GB: Have you received any feedback so far from Mojang or Blizzard?

Ramses: I have received no formal response from the companies, although I heard that some people at Mojang have seen the map and liked it. 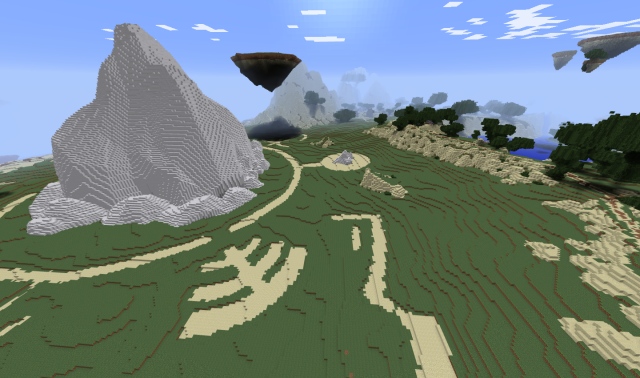