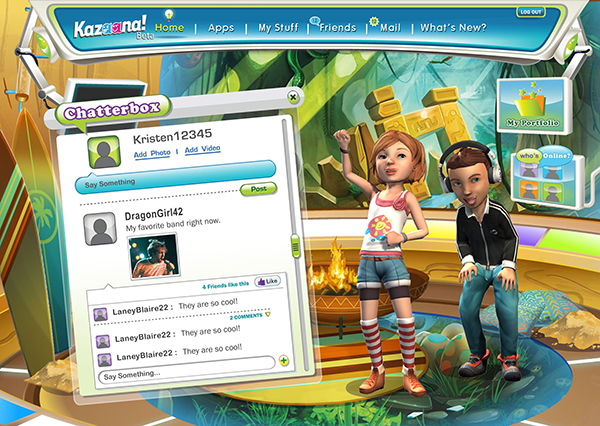 Kids have a new (and hopefully safe) place to hang out on the Internet. Kazaana, the developer formerly known as PixyKids, is launching a new social media platform, also called Kazaana. The site, targeted for ages 6 through 12, enters open beta today.

“We’ve delivered on our mission to families,” said Rajul Kadakia, CEO and co-founder of Kazaana, in a press release sent to GamesBeat, “by introducing the only digital platform where kids are empowered to be 100% themselves by inviting the people who are most important to them to interact and participate in experiences from their offline world through social technologies.”

Kazaana allows users to chat and play games using custom 3D avatars. To keep the site safe, certain content, like pictures and videos, will have to pass three levels of moderation before it appears publicly. Parents can also individually approve every friend request their child receives.

“We created Kazaana with the child as our center, and everything we do is from their point of view,” said Michael Adair, COO and co-founder of Kazaana, in the same press release. “Our safe platform appeals to kids because we allow them to experiment and play with social features in a framework that makes sense to them, and it appeals to parents because it’s an extension of their child’s offline world, which supports their core values such as strengthening close relationships, child enrichment, and archiving memories.”

Safety has become a major concern for child-focused social sites ever since the online game Habbo was surrounded in controversy concerning sexual chats in June. Disney spent millions on an Internet campaign to keep its virtual platform, Club Penguin, safe for its young audience. It’ll be interesting to see if Kazaana’s strong focus on safety will reward the new site with an influx of migrating gamers.